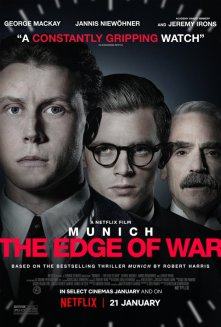 How does a filmmaker take a part of history --- of which the outcome is already known --- and still make it bloody suspenseful? Director Christian Schwochow and screenwriter Ben Power have managed to do just that. Based on the novel “Munich” by Robert Harris, MUNICH-THE EDGE OF WAR is an “edge” of your seat thriller, perfect for cinephiles who find these moments of our past scintillating.

Hugh Legat (George MacKay), a Brit, and Paul von Hartmann (Jannis Niewöhner), a German, were classmates and friends at Oxford University in England. They lost touch until the fall of 1938 when the British Prime Minister, Neville Chamberlain (Jeremy Irons), and his small entourage, including his press secretary, Legat, travel to Munich to meet with Adolph Hitler (Ulrich Matthes).

Hitler has been threatening to invade Czechoslovakia and it is Chamberlain’s hope --- along with all of Britain --- that he can persuade Hitler not to follow his plan by signing a treaty calling for peace.

Von Hartmann, a true loyalist to the fatherland, has recognized that Hitler is not just interested in restoring Germany to its prior status following World War I. His true intent is to conquer all of Europe. Von Hartmann possesses a vital document which confirms Hitler’s nefarious plans, and he prevails upon Legat to get this proof into Chamberlain’s hands in order to prevent war.

The premise for MUNICH-THE EDGE OF WAR is totally believable and made all the more fathomable by Power’s taut script. Both MacKay and Niewöhner are well cast. Their youthfulness, naivete and earnest intentions fuel the possibility that they just might change the course of history --- all the while knowing that they can’t. But that knowledge doesn’t make their machinations any less suspenseful.

Irons is utterly convincing as Chamberlain. His ability to step into these iconic roles and create his own character has always been his strong suit. The only disappointing casting decision involves Matthes, who doesn’t resemble Hitler in the least. It’s disconcerting because he is so off for the role.

It’s almost impossible not to wonder what would have happened had Chamberlain been a stronger leader --- and to compare his antics to those of certain people in positions of power today. Have we learned nothing from the most pivotal moments in 20th Century history?

From Netflix films comes a sleeper of a movie entitled MUNICH-THE EDGE OF WAR. This story, based on the best-selling novel “Munich” by Robert Harris, demonstrates --- to twist an old adage --- that fiction can be stranger than truth.

Although not completely factual, the main premise of this film is certainly fascinating to consider what might have happened in the build-up to World War II in 1938. Adolph Hitler (Ulrich Matthes, horribly miscast) has intentions of invading Czechoslovakia because he needs more space to accommodate the growing German population. But British Prime Minister Neville Chamberlain (Jeremy Irons) has the task of brokering a peace agreement with Germany to ensure their territorial ambitions go no further and possibly escalate into a wide-spread European conflict.

This two hour film literally flies by as viewers, armed with the benefit of hindsight, can only imagine a different outcome. Irons is his usual brilliant self as Chamberlain, initially regarded as a hero by the British public but later vilified because Hitler’s true plans come to fruition. Those plans are secretly revealed to German diplomat Paul von Hartmann (Jannis Niewöhner) by an associate who risks her life, Helen Winter (nicely played by Sandra Hüller).

Von Hartmann has an old friend in the British government, civil servant Hugh Legat (George MacKay), with whom he shares his secret. Initially a Hitler devotee, von Hartmann inevitably sees the light and refers to Hitler as a “monster”. The duo tries desperately to convince Chamberlain not to sign any agreement with Hitler. And that is the crux of this film.

Directed by Christian Schwochow and adapted for the screen by Ben Power, MUNICH-THE EDGE OF WAR maintains our interest and the suspense despite the terrible casting choice of Matthes as Hitler. He once played Joseph Goebbels in one episode of the TV series “The Big Ben Cinematic Universe” while Bruno Ganz played Hitler. The highly regarded Ganz would have been the obvious choice to play the fuhrer here if he hadn’t died in 2019.

The problem is that Matthes has a gaunt face and looks nothing like the real Hitler. This decision might have proved disastrous for MUNICH-THE EDGE OF WAR, but thanks to the excellent performances by Irons, MacKay and Niewöhner, this movie is a must see. Other standouts in the cast are August Diehl as Hitler fanatic Franz Sauer and Alex Jennings as Chamberlain’s chief adviser Sir Horace Wilson.

You may be thinking do we really need another WWII movie that examines the power ambitions of Hitler? MUNICH-THE EDGE OF WAR answers that question convincingly.