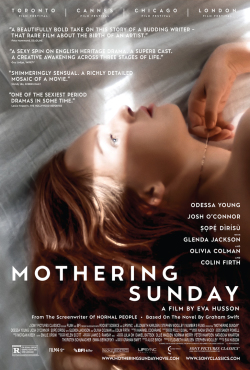 An incredible cast highlights the emotional story of MOTHERING SUNDAY, directed by Eva Husson. Based on the popular 2016 novella of the same name by Graham Swift, Alice Birch adapted the screenplay. She is responsible for another superb period piece, LADY MACBETH (2016), starring Florence Pugh, one of the best films of that year.

It is Mother’s Day 1924 in England. Mr. and Mrs. Niven (Colin Firth and Olivia Colman) are preparing to leave their country home for a quiet celebration with two other couples, the Sheringhams and the Hobdays. World War I has recently ended and the entire country is mourning the loss of so many young men, including the sons of these six parents.

The Nivens lost two boys and Mrs. Niven is inconsolable as she faces the day. The Sheringhams’ sole surviving son, Paul (Josh O’Connor), who is engaged to Emma Hobday (Emma D’Arcy), has been in love with the Nivens’ maid, Jane Fairchild (Odessa Young), for years. But their relationship can never be acknowledged due to the class divide.

But on this lovely spring day, as her employers take their leave, Jane departs for the Sheringhams’ estate to spend as much time as she is allotted with Paul. As the morning turns into afternoon, neither lover wishes to separate, but Paul is expected at brunch with the three older couples and his fiancée Emma. Leaving her behind to roam the house, naked, Paul finally bids Jane adieu.

MOTHERING SUNDAY is told via flashbacks. In the late 1940s Jane is in a new relationship with Donald (Ṣọpẹ́ Dìrísù), a Black man studying at Oxford. She has managed to leave her life of service to become a writer. And in the 1980s Jane is portrayed by the always formidable Glenda Jackson. But throughout all these years Jane never divulges the secret of her devastating love story with Paul.

Birch has penned a marvelous screenplay with rich and engrossing dialogue, particularly between Jane and Paul. Young and O’Connor are supremely suited as the young lovers who must follow different paths because of their class distinctions. Much time was taken casting Jane after O’Connor was chosen early on as Paul. It was imperative that they complement one another since they spend so much time together on screen unclothed. And they are divine.

Everyone in MOTHERING SUNDAY plays their roles beautifully. Colman and Firth work together well, with Colman bearing the unrelenting loss of two sons, which exacted a toll on Colman during filming. Firth, to his immense credit, will always be the perfect quintessential English gentleman.

Jackson’s presence is limited but pivotal --- it’s wonderful to see her on screen. However, the Oscar for the iciest stare behind sunglasses goes to D’Arcy, playing Emma, Paul’s fiancée. She certainly doesn’t need any dialogue to convey her emotions with the look she has plastered on her face.

MOTHERING SUNDAY is a small but brilliant look at class divides, their destruction and their triumphs. Bolstered by exemplary acting, it’s a study worth viewing.