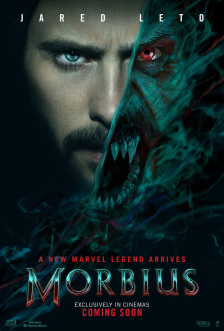 Boring! And that’s a death knell for anything coming out of Marvel Comic Universe. I was looking forward to MORBIUS because of Jared Leto, but unfortunately even he --- nor his fine supporting cast --- can infuse this lackluster effort by director Daniel Espinosa with enough pizazz to make it palatable.

At first the thought of seeing a film about a vampire monster sounded dreadful, but it does star Leto, Matt Smith, Jared Harris and the lovely Adria Arjona, so what the heck? And at one hour and 44 minutes, at least it isn’t too long --- until you’re actually sitting through it. I checked my watch way too many times, which is never good.

Like another movie releasing this Friday April1, THE CONTRACTOR, the set-up takes too much time. We meet Michael Morbius (Charlie Shotwell) and Milo (Joseph Esson) as children with a rare blood disorder in a clinic in Italy run by Dr. Emil Nikols (Harris). And while they’re both adorable, it seems like forever until we finally get to see them as adults.

The brilliant Dr. Morbius (Leto) runs a research lab in New York City with Dr. Martine Bancroft (Arjona) which is funded by the uber-wealthy Milo (Smith). Dr. Nikols is still around caring for Milo, who desperately wants his “brother” to find a cure for their disease.

Alas, when Michael does discover a way for them to be 100% healthy, it comes with a terrible price to pay. The drug has the ferocious side effect of turning them into blood-sucking killers. And while Michael fights the demonic urges, Milo embraces his new-found freedom, strength --- and thirst for blood.

Sigh --- it all sounds pretty good, but the execution is supremely tedious. Leto, Smith and Arjona give the screenplay by Matt Sazama and Burk Sharpless as much as they are able, but as I have repeatedly stated, even the best actors can’t save a lousy script. And trust me --- it’s awful.

What’s most shocking, however, are the unimpressive special effects. Usually, Marvel films can be counted upon for jaw-dropping effects that amaze audiences. For some odd reason, those electric moments of pure entertainment are nowhere to be found in MORBIUS. The only ones remotely interesting take place in the subway, and even those effects have been seen before.

The hilarious aspect of all of this is that David, who normally falls asleep during movies like this, especially during the set-up, managed to stay awake throughout the entire film. And he’s one of the few who actually likes MORBIUS. Go figure?

One telltale mark that a movie may not hold everyone’s interest occurs when my illustrious writing partner looks at her watch multiple times. That’s what happened in the latest Marvel Comic Universe film MORBIUS which has a running time of only 104 minutes. Ergo her review will no doubt be less than complimentary.

I do not agree with that assessment although I will concede the special effects, like so many these days in the science fiction/fantasy realm, do get repetitive. However, I found favor in the opening portion of the film with Michael Morbius as a young lad (Charlie Shotwell) living in a hospital with a rare blood disorder. He must receive a blood transfusion --- or as he refers to it, an oil change --- three times a day to survive.

Young Michael makes a bedside friend of Milo (Joseph Esson) who suffers from the same malady. When young Milo loses consciousness, Michael speeds into action and repairs his life-saving hospital apparatus. This prompts their doctor, Emil Nikols (Jared Harris), to recognize young Michael’s extraordinary intelligence which is channeled into a medical career.

Fast forward 25 years and the adult Dr. Michael Morbius (Jared Leto) is busy experimenting with artificial blood to counteract his disease. In his extensive laboratory, he injects a lab rat with a potential cure and the animal promptly keels over. However, minutes later, the rat is alive and well and Morbius’ assistant, Dr. Martine Bancroft (Adria Arjona), exclaims “It worked!”. Audiences will suspect a possible romantic link with Dr. Bancroft which briefly comes to fruition later in the film. But it’s a significant turn in the storyline.

The rest of the movie deals with Morbius drinking artificial blood repeatedly. He is transformed from a man who can barely walk, using two canes, sporting an emaciated body to a robust individual with superhuman strength and other qualities --- including being able to fly like the vampire bats he keeps in secret storage. The movie’s hook is that the effects of the artificial blood only last for six hours and keep diminishing as time goes on. And more importantly this causes him to develop an insatiable appetite for human blood.

Morbius’ boyhood friend is portrayed as an adult by Matt Smith. The duo is devoted to each other and inseparable. Milo sees the remarkable improvement in Michael and years of living in torment suddenly turn him into an insanely greedy individual who wants the same treatment. Smith plays the primary villain with a vengeance.

From here MORBIUS is easily predictable and the ensuing battles among old friends, along with the visual effects, become more mundane than entertaining. Aside from that criticism, however, I thought MORBIUS was rather intriguing. Writers Matt Sazama and Burk Sharpless keep to the main storyline of Dr. Morbius desperately seeking an effective antidote to the disastrous results.

Everybody recognizes that Leto is an accomplished actor. His exceptional turn in HOUSE OF GUCCI in a fat suit is contrasted here with his skinny, wrinkled body which morphs into a powerful physique. Leto’s character makes for a very sympathetic doctor until his transformation becomes deadly and quite scary. And the other Jared (Harris) in the cast is his usual professional self, always believable in any role.

Speaking of scary, this film is not suitable for younger moviegoers. MORBIUS is rated PG-13 for good reason. Many scenes are darkly threatening accompanied by the effectively eerie score by composer Jon Ekstrand.

You may want to stay around during the closing credits for a surprise appearance by a major star, and an obvious promise of a sequel.