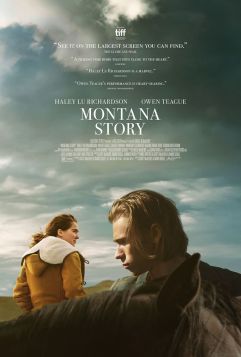 Paradise Valley in Big Sky Country provides the spectacular setting for MONTANA STORY. On a lovely old ranch surrounded by vast open plains and breathtaking mountains with snow-covered peaks, two siblings in their twenties come together after years of estrangement, as their shared father lies comatose after a stroke.

Erin (Haley Lu Richardson) had run away from Montana to upstate New York years ago. Her mother had died and her father, a lawyer not a rancher, remarried and had Cal (Owen Teague). The two children were close growing up, but after an ugly episode with their father, Erin chose to escape leaving Cal behind to deal with the aftermath and his guilt.

Now Erin and Cal are faced with those distant memories and must find a way to reconcile with their father’s imminent demise and a beautiful 25-year-old black stallion named Mr. T who has nowhere to go. Fortunately, their father’s hospice nurse, Ace (Gilbert Owuor), is wise beyond his years, doing all he can to make their father comfortable and aid in the difficult decisions they must make. Also on hand for much-needed support is their longtime housekeeper, Valentina (Kimberly Guerrero), who has been spending three days a week at the homestead despite not getting paid.

When Erin gets it into her head that she’s taking Mr. T home with her to New York, she buys an old pick-up truck and horse trailer from Mukki (Eugene Brave Rock), another local. On the way back to the ranch, the truck breaks down and Erin must enlist the help of one of her childhood friends, Joey (Asivak Koostachin), Valentina’s son, who appears to still be harboring a crush on Erin. As the daunting task of transporting her beloved horse looms, Erin realizes she must find another way to save Mr. T.

Directors Scott McGehee and David Siegel wrote the screenplay based on a story by Mike Spreter. Though David thinks the pace of MONTANA STORY is too slow, I found it soothing despite the thorniness of Erin and Cal’s relationship. This is not a drama which can be hurried --- the revelations must unfold as the movie progresses --- and a suitable solution for Mr. T must be found.

Richardson and Teague are outstanding as these two wounded siblings. Time has passed and so much damage has been done, so watching these actors work through their pain is gut-wrenching and profound.

This is a quiet film punctuated by understated performances from the supporting cast. Owuor’s portrayal of Ace is my favorite in MONTANA STORY. He embodies the immense kindness and caring of this gentle soul from Kenya, now living and working as an interloper in Big Sky Country. And Guerrero is lovely as the always faithful Valentina.

MONTANA STORY was shot on 35mm film and cinematographer Giles Nuttgens’, a longtime collaborator of McGehee and Siegel’s, landscapes are amazing. While they were filming the wind was ferocious, which only adds to the beauty of Nuttgens’ work. The score by Kevin Morby --- his first --- is another important component which makes MONTANA STORY worth viewing.

Only in theaters May 13th

Not a lot of films take place in Montana, but co-directors Scott McGehee and David Siegel chose it partly because they needed a sparsely populated place to make a movie during the pandemic. However, they were also seeking a ranch setting to accommodate the screenplay they co-wrote based on a story by Mike Spreter. The directors called upon their award-winning and frequent collaborators to ably bring MONTANA STORY to the big screen --- and it shows.

The result is a visually stunning film against the backdrop of soaring snowcapped mountains. Two half-siblings, estranged for many years, come together as their mutual father lay in a coma on life support. Actors Haley Lu Richardson and Owen Teague play twenty-somethings Erin and Cal. They offer memorable performances recounting their often-painful relationships with their father and with each other.

The filmmakers decided against using flashbacks to maintain the “emotional immediacy” of the story. We are not distracted by younger actors playing these characters years before, but instead depend on the recollections, however raw, of both Erin and Cal.

Complicating the reunion of the brother and sister is the dilemma of what to do with Cal’s horse. Mr. T is 25 years old and arthritic. Cal agrees with the assessment from the local vet that the beautiful black stallion with the soulful eyes should be euthanized as “the right thing to do”. But Erin insists she will transport him from Montana back to New York state where she lives. Mr. T’s fate hangs over the story like the executioner’s axe waiting to fall.

MONTANA STORY is one of those small films that we can marvel at later and perhaps watch a second time with our own siblings. It features a strong supporting cast, including Gilbert Owuor as Ace, a hospice nurse, and Eugene Brave Rock as the native American Mukki who happens to own a pickup truck that becomes a character of its own.

Viewers can draw their own conclusions, but as things unfold, MONTANA STORY is about the consequences of not taking action in certain situations when it is clearly necessary to do so. If only it were that easy.

Only in theaters May 13th