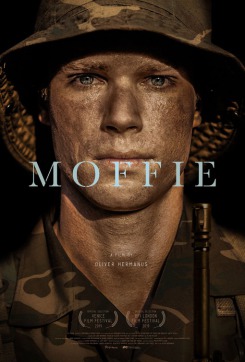 The white-minority government of South Africa is embroiled in a  border conflict with Angola. Conscription is the two-year mandatory military service every white male must complete if they are over 16 years of age. Nicholas Van der Swart (Kai Luke Brummer) is one of these young men and as MOFFIE begins he is preparing to leave for this compulsory duty.

Upon arrival at his boot camp, it becomes immediately apparent that this experience will not be a pleasant one. Their leader, Sergeant Brand (Hilton Pelser) is a brute, but Nick has already made a friend on the train, Michael Sachs (Matthew Vey). The two mostly watch out for one another and, though Nick is rather quiet, he manages to get along with the other recruits.

One of them, Dylan Stassen (Ryan de Villiers), a very handsome young man, forms a romantic bond with Nick during one of their nighttime training maneuvers digging trenches. Already, one gay couple has been found out and the consequences are most dire --- a banishment to the psychiatric Ward 22, where unspeakable things happen.

After a round of boxing matches in the barracks the night prior to the recruits’ final break before heading to the skirmishes at the border, Stassen is reprimanded and not given leave. When Nick returns after a week away, Stassen is gone and rumor has it that he has been sent to Ward 22.

(the so-called black danger). Like all wars, it is ghastly and inhuman, but Nick manages to survive. Once back at home at the end of his two years, he seeks out Stassen to try to rekindle their relationship.

MOFFIE is beautifully filmed by Jamie D Ramsay. There are many exquisite moments and I remember thinking that the sunsets in South Africa are as stunning as the ones we are fortunate to experience in Southern California. Nick and Stassen lying side by side in a muddy trench while Stassen strokes Nick’s hair is another. And the two of them swimming in the sea at the end of MOFFIE is just one more example of Ramsay’s impressive work.

Director Oliver Hermanus, who was born in Cape Town, South Africa, has guided his mostly unknown cast with a great deal of skill and perfection. He’s quite proud of the fact that these male actors are predominantly high school students, untrained, with Brummer auditioning for three different roles before landing the part of Nick.

And they are all extraordinary, especially Brummer. He’s beautiful without being overly effeminate, allowing for Nick to navigate this treacherous time to be gay in the military. And his silent reticence about serving and being amongst these other straight boys speaks volumes. It’s a masterful performance for such a novice.

We all know how vastly important the writing is --- and the screenplay by Hermanus and Jack Sidey doesn’t include one wasted word. It’s profoundly lacking in any unnecessary dialogue, allowing the actors to fill in the blanks. And the original music by Braam du Toit is a brilliant accompaniment to an already alluring and important film.

In 1981 in South Africa young boys of 16 were conscripted into the army to fight what was seen as the oppression of communism and the die swart gevaar or “black danger”. South Africa didn’t try to hide its racist Apartheid views, i.e, its belief in white supremacy. The new film called MOFFIE is directed by Oliver Hermanus who was 11 years old when Apartheid ended in 1994. He also co-wrote the screenplay with Jack Sidey based on a memoir by André-Carl van der Merwe.

“Moffie” is an Afrikaans word that is a derogatory term for anyone who is gay. Afrikaans is one of the languages of South Africa, originating with Dutch settlers. It is spoken by millions of its inhabitants, and in MOFFIE the villainous characters frequently use terms like “faggot” translated via English subtitles.

Hermanus, a gay man himself, wanted to feature this homophobic policy as it related to the military at the time, and the result is a searing look at one young man’s experience in the service of his country. Playing lead soldier Nicholas Van der Swart is handsome young actor Kai Luke Brummer whose sendoff to military camp is abrupt.

Nicholas does not share the racist views of his fellow recruits. Hermanus only touches briefly on the race issue in his film. Most memorably, when an older Black man, handsomely attired in a suit and tie, is pelted with food at a train station, we see the disdain on Nicholas’ face as the others hoot and holler their approval.

From the outset of their training, it is clear that the sadistic military officers, led by Sergeant Brand (Hilton Pelser), will not tolerate anything but strict obedience. The superior officers display zero humanity throughout the story except for a brief scene near the end when Nicholas lies on the ground near his tent after a deadly battle and Brand kneels next to him and gives him his only sign of approval.

On the other hand, the harsh discipline and rigorous training serve the recruits well when they do go into battle. Their prior struggles with sit-ups while holding concrete blocks help them immeasurably when they must crawl up a hill at night facing enemy gunfire. This is just one example of Director of Photography Jamie D Ramsay’s superb efforts. Of special note is the extreme use of sound in MOFFIE. The filmmakers give us more than a few jolts at unexpected moments.

MOFFIE is similar in nature to other films that feature intolerance of gays. Nicholas’ sexual preference is confirmed in a flashback to when he was a boy and now his attraction to another recruit, Dylan Stassen (Ryan de Villiers). But their affection must be kept secret or severe repercussions may follow.

Most of the film centers around the cruelty inflicted on these boys and the camaraderie they share when it’s hidden from their superior officers. They cajole and joke amongst themselves, like any group of teenagers, but the graphic suicide of one brutally bullied recruit momentarily negates some of the softer moments MOFFIE offers.

Like all war stories, eventually the fortunate soldiers who survive the violence serve their time and go home. Nicholas is almost mute as he reunites with family members and we suspect he suffers from a form of PTSD. It is a tribute to Brummer’s subtly nuanced performance, notable for a young man at the very outset of his acting career.