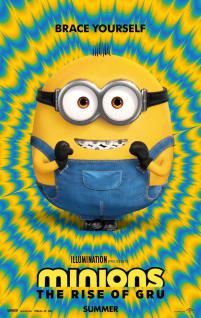 Origin stories have become so commonplace that now even Gru and his crew are taking advantage. MINIONS: THE RISE OF GRU showcases 11 ¾-year-old Gru (still voiced by Steve Carell), who dreams of becoming the greatest supervillain in the world. But first, he must learn a thing or two, so he applies to join the Vicious 6, a supervillain supergroup.

Hanging out in his mother’s (voiced by Julie Andrews) basement with his new cohorts, Kevin, Stuart, Bob and Otto --- and a host of other Minions --- Gru is planning his future of crime. Wild Knuckles (voiced by Alan Arkin) has recently been eliminated as the leader of the Vicious 6, so Gru is interviewing with the remaining five to take his place.

The new commander is Belle Bottom (voiced by Taraji P. Henson) and she is definitely not impressed with Gru --- until he manages the impossible. Now it’s a race against the rest of the Vicious 6 to keep them from becoming the most powerful supervillain supergroup on the planet.

Personally, I think it is time to retire this franchise. Illumination has done about all it can with Gru and his Minions --- and enough is enough. It has been a highly successful run for them, but frankly, with this cheesy back story, it appears they’ve run out of fresh ideas.

MINIONS: THE RISE OF GRU is entertaining enough for children, but there are some aspects of it which are too frightening for the younger set. There are a few monsters which can certainly induce nightmares --- along with Wild Knuckles’ pool full of crocodiles.

As always, these movies are extremely colorful with superb animation. The “Twinkie”-like Minions (voiced by Pierre Coffin) are, at times hilarious, especially when taking kung fu lessons from Master Chow (voiced by Michelle Yeoh). Otherwise, they can be downright annoying.

Arkin is a nice touch as over-the-hill Wild Knuckles, who develops a special fondness for the ambitious Gru. And MINIONS: THE RISE OF GRU boasts a fantastic 70s soundtrack. But perhaps with this fifth installment, Illumination will finally see fit to shelve Gru and his little yellow sidekicks and come up with something new. One can only hope…

The “Minions” franchise is back with the prequel of how Gru met his pals in MINIONS: THE RISE OF GRU. Providing the voice of young Gru – he’s 11 ¾ years old --- is, of course, Steve Carell. And a host of name actors provide the rest of the voices. However, this is essentially more of the same silliness with the gibberish-spouting little yellow guys (Pierre Coffin), known as Minions, doing their thing. Maybe small kids new to the franchise will be entertained, but there’s nothing fresh here for adults.

Alan Arkin provides most of the humor as the voice of Wild Knuckles, the elderly founder of a supervillain group called the Vicious 6 --- they ultimately oust him and look for a replacement --- young Gru you’re thinking? Others in the group have mildly amusing 1970s references like Belle Bottom (Taraji P. Henson), Jean-Clawed (Jean Claude Van Damme) and Nun-Chuck (Lucy Lawless).

Known stars who also lend their voices include Julie Andrews, Russell Brand, Danny Trejo, Will Arnett and Steve Coogan, but I had a near impossible time pairing actors with their characters, which is always part of the fun with animated films. Michelle Yeoh has an extended turn as a kung fu expert turned acupuncturist named Master Chow, but these scenes mostly fall flat.

What the film could have used are more creative scenes like the one in young Gru’s classroom where the teacher (Colette Whitaker) asks her charges what they want to be when they grow up. One little girl proudly proclaims that she wants to be a teacher, to which the real teacher, without skipping a beat, replies “No, you don’t”.

This was a missed opportunity to have other kids reveal their dreams and have them dashed accordingly --- with a sense of humor, naturally. Young Gru is just the third kid to be asked, giving his “I want to be a supervillain” answer. It’s as if the filmmakers couldn’t wait to get young Gru into his mode of villainy.

MINIONS: THE RISE OF GRU is the latest franchise to have runs its course.