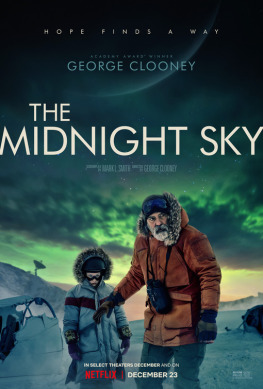 George Clooney --- looking more like David Letterman than the suave Clooney we are used to --- directs and stars in THE MIDNIGHT SKY. Based on Lily Brooks-Dalton’s novel “Good Morning, Midnight”, Mark L. Smith adapted the screenplay. Though I know (I can always tell) my illustrious partner doesn’t like this movie, I found it engrossing --- though some, like David --- may find it a tad slow in parts. But let me repeat, what does he know?

THE MIDNIGHT SKY begins with a research station in the Arctic being hurriedly evacuated. A catastrophic event has hit Earth and the people living at the station --- all except Augustine Lofthouse (Clooney) --- want to get out. A mother is looking for her child, but she is told that the little girl was inadvertently put on another chopper which left earlier. It’s only after everyone else has left that Augustine finds her. She’s not very talkative, but she does reveal her name, Iris (Caoilinn Springall), by drawing the flower.

In the meantime, a spaceship carrying five astronauts led by Commander Tom Adewole (David Oyelowo) and Sully Rembshire (Felicity Jones), who is pregnant, is heading back to Earth after being away for two years. They have lost contact with NASA and others, so they have no clue what has happened.

Augustine has been trying to reach them to warn them, but the station where he and Iris were left behind is too much of an outpost to allow them to communicate. He makes the decision to travel to another location which he hopes will enable him to be in touch with the ship. However, it is the Arctic, and the trip will take several days, even with a souped-up snowmobile. With Iris in tow, they set out on a trip which presents one nightmare after another.

As Tom and Sully’s vessel cruises through space off course, they encounter a field of debris which knocks out some of their systems requiring Tom, Sully and Maya (Tiffany Boone) to don their spacesuits and leave the ship to do the repairs. The two other astronauts, Sanchez (Demián Bichir) and Mitchell (Kyle Chandler) remain at the controls.

I am not a huge sci-fi fan, but I found THE MIDNIGHT SKY mostly riveting. The beginning is rather slow after all the other residents depart and Augustine is left alone with his chemotherapy and thoughts of a lost love named Jean (Sophie Rundle). But Iris brings him back to life --- and their journey together certainly ratchets up the suspense.

And of course, it’s always a sure bet that anytime astronauts leave the ship for any reason, something is going to go terribly wrong. David wasn’t too concerned because by this time he had already lost interest, but I was terrified. The unfortunate aspect here is that we know exactly who in this group of five will be “sacrificed” --- a storytelling problem, not a directing one.

Springall is absolutely adorable and she plays well opposite Clooney. Thankfully the script has her as a calm, totally mature child, so there are no overt histrionics when Iris and Augustine meet with various hardships on their journey. Watch for her --- she’ll be around a lot.

This is a good role for Clooney. Playing an old curmudgeon suits him, but once he’s tasked with caring for Iris, he rises to the occasion. He’s actually really cute in a scene where they are shooting peas at each other --- you can tell he has children now.

I will admit that Jones, Oyelowo and the other astronauts are not given much to work with. Other than the perilous outside walk, the total sum of their attention is given to choosing a name for Sully and Tom’s forthcoming baby girl.

THE MIDNIGHT SKY isn’t perfect --- far from it. But considering some of the other options we’ve reviewed lately, I’d rather spend a cold winter’s night watching this movie than many others.

THE MIDNIGHT SKY is not George Clooney’s first foray into science fiction and outer space. That occurred in the 2013 blockbuster GRAVITY when he, Sandra Bullock and spectacular technical achievements propelled that film to seven Academy Awards and a nomination for Best Picture.

This particular movie, based on the critically acclaimed novel “Good Morning, Midnight” by Lily Brooks-Dalton, will not receive anything close to the accolades showered on GRAVITY. Clooney --- who also directs --- stars as Dr. Augustine Lofthouse surviving alone somewhere in the Arctic. He’s a renowned scientist in communication with a small crew of astronauts who are returning to Earth from a mission to Jupiter. The year is 2049. Technology has advanced to the point where Dr. Lofthouse is able to give himself needed blood transfusions.

We are left to wonder why this man stays behind in a barely habitable frozen tundra. The answer comes later, but the scene shifts to the

spaceship --- such as it is --- and the crew of five astronauts. Commander Tom Adewole (David Oyelowo) is in charge of their mission, accompanied by his significant other, Sully (Felicity Jones), and three others portrayed by Kyle Chandler, Demián Bichir and Tiffany Boone.

The mood on the ship is amiable. They joke about what name to give Sully and Tom’s baby girl when she arrives, and two of them perform a raucous duet of Neil Diamond’s “Sweet Caroline”. All is good until an asteroid shower hits them unexpectedly.

We are told in the beginning that some major event has occurred on Earth three weeks earlier, and that is kept a mystery until the finale. What should have been an Earth-shattering (excuse the pun) revelation is communicated to us via a tearful Augustine’s somber words to the crew when he tells them we didn’t do a very good job of saving the planet.

While THE MIDNIGHT SKY boasts often spectacular special effects, they are not enough to offset the diminished empathy we feel for all involved. Augustine and Iris (Caoilinn Springall), a small girl left behind on his outpost, share a bond that is not well-earned based on the lack of development of their pairing. And the two astronauts who must abandon ship likewise display a friendship not supported by their minor character development. It appears that more time was spent on visual effects than on any other aspect of the movie.

As interesting as the visuals may be, they don’t necessarily break any new cinematic ground. The asteroid shower seems ordinary as does the spacewalk by Tom and Sully to repair the damaged ship. Ultimately the suspense is limited, almost non-existent, which is a serious shortcoming for the space adventure that THE MIDNIGHT SKY could have been.