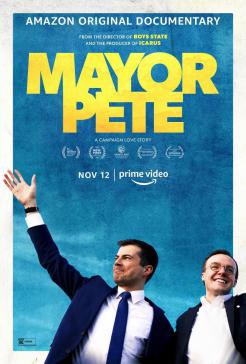 It doesn’t matter what your political affiliation is --- or to some, maybe it does --- but the meteoric rise of Pete Buttigieg, a relatively small town (South Bend, Indiana) mayor to a top-tier presidential candidate, is a fascinating story as told in MAYOR PETE. It’s also great material for a documentary, which is what caught the eye of director Jesse Moss.

What compounds the interest in Buttigieg is his background --- he’s a Rhodes Scholar, a veteran AND he’s openly gay --- married to Chasten Glezman Buttigieg. If elected to the U.S. Presidency, he would also become the youngest person to hold that office.

Moss received permission from Buttigieg and his campaign staff to travel with them to be able to document what really transpires behind the scenes of such a campaign. What began as an unlikely challenge grew daily into a movement which took many people by surprise. In a field of 20 candidates, Buttigieg and his team were able to successfully connect with voters, as evidenced by his unexpected victory in Iowa.

The campaign footage is impressive and captivating. People were really taken with this soft-spoken, well-versed candidate. He knew the issues and had creative ideas for solutions. But it’s the personal moments between Pete and Chasten which bring MAYOR PETE to life.

Not fully knowing what they were in for, this dedicated married couple navigated many storms throughout the ordeal of campaigning and seemed to come out on the other side even stronger. Date night at Dairy Queen might not seem like a big deal to some, but for Pete and Chasten it was a treasured way to escape the demands of this arduous period in their lives.

Unfortunately, by March 1 of 2020, after a disappointing finish in South Carolina, Buttigieg ended his quest for the presidency. But the really good news is he is currently serving as the first LGBTQ Senate-confirmed U.S. Secretary of Transportation --- with an eye on 2024.

The new documentary MAYOR PETE is an unremarkable film featuring a most remarkable subject. Pete Buttigieg, the mayor of South Bend, Indiana, ran a wildly successful campaign for president in 2020. Although he didn’t win the nomination, he established himself as a viable candidate in future national U.S. elections. And Joe Biden appointed Pete to Secretary of Transportation, becoming the first openly gay cabinet member in American history.

I’m basically calling the movie ordinary from the perspective of someone who was glued to the TV almost nightly as the political debates and efforts to get rid of Donald Trump escalated in 2020. I didn’t see much new material in the doc from what I had already seen on television other than Pete’s relationship with his husband Chasten. The film goes to great lengths sharing their inspiring story.

MAYOR PETE does a good job going behind the scenes of the campaign’s efforts to present Buttigieg in the best light. His chief strategist, Lis Smith, is a bulldog who kept the pressure on Pete to modify his public persona as she saw fit. When Mayor Pete won the Iowa Caucus the campaign team was almost delirious with the possibility that he might actually earn the nomination.

If you did not pay close attention to the political events of 2020 as some who were obsessed, you may find MAYOR PETE a riveting piece of filmmaking. One thing is sure --- Pete Buttigieg is a legitimate contender for the most important job in the world, largely thanks to Ms. Smith and Pete’s unassuming and brilliant perspectives on virtually any subject.