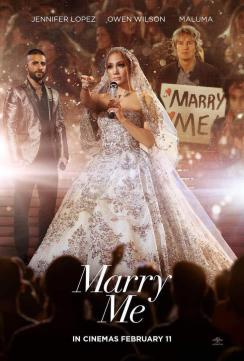 As romcoms go, MARRY ME isn’t the best, but it is far from being the worst. As I’ve written before, comedies are by far the most difficult screenplays to pen --- then add the romance and its nigh near impossible to be successful.

Global superstar Kat Valdez (Jennifer Lopez) is so very excited about her upcoming concert. In front of 20 million fans, she and her fiancé, Bastian --- also a recording icon (played by Colombian singer Maluma) --- will tie the knot while celebrating their huge hit single “Marry Me”.

But these things never go smoothly, and right before heading on stage for the nuptials, Kat sees what everyone else is seeing --- a breaking story about Bastian and her very own assistant having an affair.

Determined to make the most of the situation --- hey, she’s already in the most stunning wedding gown --- Kat espies a man in the audience holding a sign that says “Marry Me”, obviously referring to the song. That doesn’t stop Kat. She proposes right then and there, inviting this complete stranger on stage to marry her.

Now, that lucky guy is the ever-adorable Owen Wilson, so there is that. I mean, who wouldn’t marry Owen? But I digress. His character is Charlie Gilbert and he’s only at the concert because his best friend and colleague, Parker Debbs (Sarah Silverman), convinced him it would be a good opportunity to bond with his 12-year-old daughter, Lou (Chloe Coleman).

Charlie is divorced and teaches math at Lou’s private school in Brooklyn. He’s afraid he’s losing Lou to other interests --- certainly not math --- and he’s desperate to reconnect. When Kat picks him out of the crowd, of course he has to say yes to impress his daughter.

Despite what others are saying, I love the premise. It’s absurd, yes, but also so full of possibilities, especially for a romantic comedy. These two individuals couldn’t be more different, but that’s the fun. How are they going to get through the next three to six months and make it look plausible?

On hand to help is Kat’s British manager, Collin Calloway (John Bradley – a huge favorite from “Game of Thrones”), who is ready to have a heart attack at every turn. In spite of their differences, and there are plenty, Kat and Charlie try very hard to make it work. He’s definitely not a fan of her entourage, especially the guy holding the camera who follows her everywhere --- documenting everything.

Kat, on the other hand, does seem comfortable in his world. They go bowling --- a very cute scene, won’t give it away --- and Kat even shows up at Charlie’s after school math club meeting. The students are totally pumped to have a real live pop star in their midst, culminating in an impromptu dance number to another of her hits “I Just Got Paid”. Totally entertaining.

And that’s the thing about MARRY ME. It’s a sweet, feel-good movie you can enjoy with the entire family --- grandma included. Lopez and Wilson have just the right chemistry to pull off this unfathomable story. It’s the perfect movie for a Valentine’s Day date.

Before you poopoo the premise of this film, hear this: MARRY ME is way better than I anticipated. It is sensibly written preventing the actors from going overboard with the idea that total strangers from completely different worlds can actually end up in a romantic relationship.

I have always liked Jennifer Lopez (Kat Valdez) as an actress. She obviously is an accomplished vocalist and still ravishing at age fifty-two. Owen Wilson (Charlie Gilbert) is as likeable an actor as there is working today. The pair make a very compatible and believable couple, but the fact that MARRY ME takes its time for them to really connect makes the film entertaining and not a waste of your time.

Sarah Silverman is quite amusing as Charlie’s friend and confidante Parker Debbs. Her character is over-the-top at times, but who cares? She is Sarah Silverman. The Colombian singer/actor Maluma is effective as Kat’s fiancé Bastian, who blows up the wedding plans by cheating on her with her assistant and it’s all caught on video. Ah, the power of social media. Chloe Coleman plays Charlie’s precocious 12-year-old daughter, Lou, a huge Kat Valdez fan with a presence that belies her age.

There are nice touches of celebrity reality like the annoying videographer who follows Kat’s every move to satisfy her fan base. But the real standout in this cast is John Bradley as Collin Calloway, Kat’s manager. He is the voice of reason who demonstrates a logical approach to this unlikely situation in a totally down-to-Earth manner.

Although we are certain that Kat and Charlie will develop real feelings for each other, we’re not completely certain of the final outcome. Credit goes to screenwriters Harper Dill, John Rogers and Tami Sagher based on the graphic novel by Bobby Crosby for keeping us guessing. And director Kat Coiro deserves plaudits for maintaining control of her cast in MARRY ME which is a departure from her normal TV chores. Coiro helmed two episodes of the immensely entertaining television series “Dead to Me” starring Christina Applegate and Linda Cardellini.