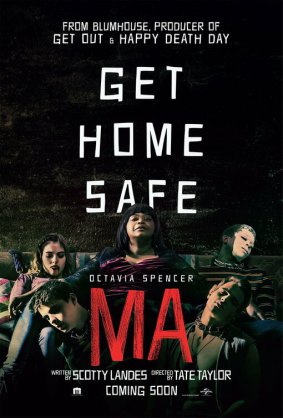 Ma reunites Octavia Spencer with Tate Taylor, who also directed Spencer in her Oscar-winning turn in THE HELP. And it is Spencer who illuminates and dominates Taylor and co-writer Scotty Landes’ screenplay.

Spencer plays small-town veterinary aide, Sue Ann, who is employed by a doctor (Allison Janney) who is constantly haranguing poor Sue Ann for some reason. (It’s a teeny, tiny role for Janney, who is viciously hilarious in her peroxide blonde wig.) When she is approached by a group of local high school students outside of a liquor store to buy alcohol for them, she at first refuses. She ends up relenting, making one of them promise to not drink and drive.

The students, the new kid in town, Maggie (Diana Silvers), Haley (McKaley Miller), Andy (Corey Fogelmanis), Chaz (Gianni Paolo) and Darrell (Dante Brown), have now found their new partner in crime. Sue Ann continues to purchase their booze and even lets them hang out in her basement in a house way out of town. But the more they party --- and the more Sue Ann, who has now earned the nickname “Ma”, wants to hang out with them --- Maggie becomes suspicious of Ma’s ulterior motives.

As I have repeatedly stated, I am no longer a fan of the horror movie genre. But I am a big admirer of Spencer, so I let myself be dragged to see Ma. And, as always, Spencer doesn’t disappoint. Unfortunately, she has received some snarky press for choosing to act in Ma, but I applaud her for it. Women of color are rarely seen in roles such as this --- and how much fun did she have doing it?

I would imagine a lot! Sue Ann is definitely creepy, and you can see and enjoy with relish her decline into complete madness. As it turned out, much of her craziness stems from the horrible treatment she received in high school, so Ma takes on the mantle of a revenge film of sorts. But Spencer is great, using those huge, expressive eyes of hers to their full advantage. And she never overacts or turns Ma into a campy figure.

The kids are all decent, especially Silvers who can also be seen in the recent hit BOOKSMART. When Sue Ann tells Maggie she can feel her big doe eyes on her back, Sue Ann’s totally right. Silvers possesses those large brown eyes you can get lost in. And she’s also a good actor. Her mom, Erica, is played by Juliette Lewis, and the two of them have a wonderful chemistry.

The script by Landes and Taylor is a tad uneven, with more than just a few flaws. But Ma is decidedly scary enough for me, with a few good jolts at the beginning, going through to the end. The sadistic part of me loves how Sue Ann handles the adult Mercedes (Missi Pyle), years after the teenage Mercedes (Nicole Carpenter) made her life hell.

Ma won’t be winning any awards for Spencer, but it’s terrific to have her carry this film on her own --- and do it with such panache.

In Ma, Academy Award winner Octavia Spencer is a veterinary technician in Ohio who befriends a group of local teens by purchasing liquor for them, and then inviting them to use the basement of her home for parties. Her name is Sue Ann, but she insists the kids call her “Ma”.

On her first day at school, Maggie helps a fellow student named Genie (Tanyell Waivers) who is struggling in a wheelchair. This small act of kindness will prove to be the best move Maggie makes all year.

Although she’s not a big drinker, Maggie agrees to accompany her new friends to the “rock pile” where they imbibe freely, and the cops tend to look the other way. As Ma continues to provide them with booze, the partying shifts to her home. But there is something very unnerving about Ma’s behavior.

Ma is purposefully uneventful as we get to know these characters. But there is a haunting presence as this very effective horror film slowly and inexorably builds suspense.

Spencer is deliciously evil as a woman who is essentially a schizophrenic psychopath. Ma can be an incredibly friendly, charming and articulate individual, but in an instant her demeanor can shift to someone who is evil incarnate, bent on revenge for something that occurred years before when she herself was a high school student. We learn via flashbacks how her humiliation at that time shaped her current behavior. Spencer, in mere seconds, can change Ma’s warm smile into a chilling facial expression. Warning: this is not the Octavia Spencer you know from HIDDEN FIGURES.

The rest of the cast is excellent, especially Silvers. She can currently be seen in a smaller role in BOOKSMART, but in Ma, she plays a strong second to Spencer. As a typical teen interacting with her mother in a new setting, Silvers gains our understanding and our empathy as she begins to unravel the truth about Ma. And Lewis is one of my favorite actors. She always makes performing look effortless, and here she excels as the concerned single mother whose life revolves around her daughter.

Some scenes in this film are shocking. In fact, I found myself, on a number of occasions, uttering aloud brief semi-expletives as events unfolded. This is a sure sign that Ma is a story that envelops the viewer from the beginning, and never lets up until the surreal conclusion.

Of special note is that Ma director Tate Taylor also helmed THE HELP (2011), the movie which earned Spencer her Oscar for Best Supporting Actress. Taylor cast himself in Ma as a sympathetic police officer who gets more than he bargained for when confronting Ma. Meanwhile, it occurs to me that Anthony Hopkins won a Best Actor Oscar for his portrayal of Hannibal Lecter in SILENCE OF THE LAMBS (1991), so it’s not a stretch to think that Spencer could garner a nomination for Ma --- she is that compelling.

Other notables in the cast are Luke Evans as Ben, Sue Ann’s one-time high school classmate who was complicit in her youthful shame, and Missi Pyle as Ben’s floozy girlfriend, Mercedes. Allison Janney has a small role as the veterinarian for whom Sue Ann works. They have an almost comical, contentious relationship.

Jeanne always says that the writing is key in any movie venture. In his feature film debut, Scotty Landes hits all the right notes, as these teenagers interact with Ma and each other. Landes’ use of small hints foreshadowing Ma’s evolving bizarre behavior helps mightily to build the tension, while this film borrows effectively from classics like CARRIE and MISERY.

Jeanne and I have always thought that making a feature-length comedy is as hard a task as there is in the film industry. I would argue that making an effective horror-thriller is equally difficult. Ma certainly succeeds on that level.