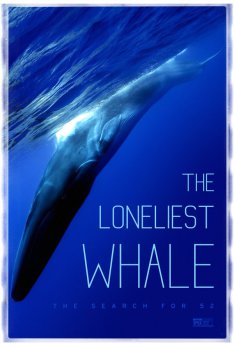 With a voice all his own, “52”, the nickname for 52 Hertz Whale, roams the ocean in search of an answer to his call. Following the highly informative National Geographic/Disney four-part series, SECRETS OF THE WHALES, which clearly defines each whale species’ vocals, Joshua Zeman’s documentary THE LONELIEST WHALE: THE SEARCH FOR 52 is another fascinating look at how whales communicate --- and how one whale is seemingly all alone.

Going back to 1989, the U.S. Navy picked up a strange signal, non-mechanical, resonating at 52 hertz. In 2004, “Deep Sea Research” published a paper by scientists William A. Watkins, Mary Ann Daher, Joseph E. George and David Rodriguez from the Woods Hole Oceanographic Institution which determined that though this whale had been swimming in the Pacific for years, calling out --- no response was ever received. Thus, 52 was dubbed “the loneliest whale”.

Following an article in the New York Times about 52, his story took on a life of its own. People all over the world became obsessed with this sad tale of a whale all alone in the vast ocean, inspiring songs, plays, sculptures, paintings, etc. It was the idea of loneliness, not only for 52, but our society as well, which prompted Zeman to research 52 and the remote possibility that the whale could be found.

Beginning with a goal of $300,000 on Kickstarter, which was quickly attained, Zeman assessed the importance of finding out if 52 was still even alive, before an expedition could be assembled. Enter Dr. John Hildebrand, a Distinguished Professor at the Scripps Institution of Oceanography of the University of California at San Diego.

His intern had been tasked with locating 52, and she found evidence of the whale off the coast near Santa Barbara, California, which made the search infinitely more feasible. Next Hildebrand informed Zeman that the team needed John Calambokidis, one of the founders of Cascadia Research Collective, and a senior research biologist who photographs and biopsies whales’ skin and blubber.

The experimental expedition was to last one week only, whether they found 52 or not. And Zeman through his lens and storytelling, manages to keep us on the edge of our seats as we watch this dedicated group go through their paces. It is a riveting experience mad even more special by the fantastic filming throughout.

It’s almost incomprehensible to consider this undertaking because of the vastness of the ocean --- and the fact that these scientists are looking for one specific whale. On top of what we learned from SECRETS OF THE WHALES, THE LONELIEST WHALE: THE SEARCH FOR 52 expands upon that knowledge and introduces us to even more information --- some of it profoundly worrisome.

Over hundreds of years whales have had to endure many hardships, specifically whale hunting which almost caused extinction. Even after whales were no longer slaughtered for their oil, the killing continued at a brisk and frenetic pace. It wasn’t until their whale songs were discovered that people worldwide became aware of their predicament and efforts to save them were established.

Now, whales face noise pollution. With a huge amount of cargo vessels transporting goods, the noise from these carriers is filling the oceans with interrupting sounds for the whales. This greatly affects the ability of whales to communicate, which is bad enough, but it also prevents them from being warned that ships are present. Their vision isn’t good enough for them to catch a vessel until it’s too late, thus thousands upon thousands are being slaughtered underwater by these massive ships.

Zeman has done an exemplary job bringing this story of 52 to the masses. It’s a testament to the dedication of humans to help in any way to solve one --- but is 52 really the only one --- whale’s loneliness problem.

Here’s a query: would you rather look for a needle in a haystack or a whale in the ocean? A group of determined marine scientists decided the latter would be easier.

Recent docs about marine life, specifically whales, have focused largely on the animals themselves --- their different species, songs, traits, habits and the like. THE LONELIEST WHALE: THE SEARCH FOR 52 is specifically concerned with the absolute devotion of a small group of dedicated scientists who are completely intrigued with answering some questions: where is the so-called 52 Hertz Whale, is it still alive, and has it truly spent decades alone in the Pacific Ocean?

As a young boy of 14, co-writer and director Joshua Zeman, working on a whale-watching cruise boat for tourists, spotted a whale from his perch high atop the mast. This sighting became an obsession for him and would ultimately lead to this new documentary. The film is interesting but a bit too dry for younger viewers --- a lot of technical jargon is employed. But it does examine how humans embrace animals as a way to explain, perhaps, their own sense of loneliness. Of note is the fact that Zeman was a co-producer of one of Jeanne’s all-time favorite films THE STATION AGENT (2003).

In 1989 the U.S. Navy recorded strange sounds with instrumentation meant to detect submarine activity. Dr. William Watkins, an oceanographer with The Woods Hole Oceanographic Institution in Massachusetts, determined that the sounds were actually from a whale, but unlike any he had ever experienced. For the next 12 years Watkins tracked the “song” which may have been a mating call, but there was never a response from another whale. He concluded that perhaps this whale --- which some scientists believe could be a hybrid between a blue whale and a fin whale --- was a unique species and was living in the sea in total isolation.

A New York Times article in 2004 about the 52 Hertz Whale --- so named for the rare frequency of its sound, a low bass note to humans but much higher to blue whales who hear frequencies between 10 and 40 hz. The story led to a frenzy of empathy by thousands of people intrigued with the idea of this mammal all alone in the epic span of the Pacific, and theorists believed 52’s situation echoed the sentiments of humans everywhere who felt alone or isolated themselves.

Many years before as depicted in the documentary --- in the 1970s --- the recordings of humpback whale songs led to the “Save the Whale” protests in the U.S. and elsewhere. National Geographic even ordered millions of cheap records as inserts in its magazines. There are graphic images in the film of dead whales being mutilated for their oil and blubber. Thankfully, the protests led to a huge drop, perhaps as high as 99% by some accounts --- in the slaughter of whales mostly attributed to China and Japan.

Dr. Watkins died in 2004 but the search to solve the mystery of the 52 Hertz Whale continued. Part of Watkins’ legacy is his comment that what we can hear coming from the ocean depths is far more important than what we can see.

Zeman and key scientists went on their expedition partially funded by Leonardo DiCaprio, also an executive producer on the film. THE LONELIEST WHALE: THE SEARCH FOR 52 ironically must overcome the biggest obstacle to its effectiveness, namely that its primary subject --- the 52 Hertz Whale --- is not present in the story other than in a theoretical, albeit scientific, sense. It depends to some extent how much --- or how little --- the viewer identifies with the obsession of the film’s participants. Nevertheless, while 52 has never been sighted, a revelation at the end of the documentary is an eye-opener.