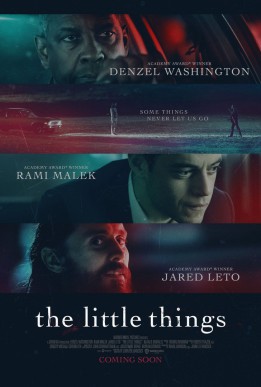 Three Oscar winners, Denzel Washington, Rami Malek and Jared Leto star in John Lee Hancock’s latest offering THE LITTLE THINGS. What should have been an off-the-charts thriller is only marginally more than  entertaining.

Hancock, who writes, directs and co-produces, begins with a decent premise. Deputy Sheriff of Kern County, Joe “Deke” Deacon (Washington), returns in 1990 to Los Angeles, where he was once lead detective. He was sent there by his superior to pick up evidence, and becomes embroiled in the new top dog, Jimmy Baxter’s (Malek), murder case.

Jimmy is fascinated by Deke’s methods and reputation. Noticing similarities between the most recent homicide and a case he never solved, Deke takes some time off from his deputy job to hang around LA and coach Jimmy. The two of them hone in on a potential suspect, Albert Sparma (Leto), who works at a local appliance repair shop in the same neighborhood as the latest killing.

Watching Washington and Malek work together is worthwhile. They develop a good chemistry despite their obvious dissimilarities, particularly in age and size. Washington’s Deke is a grizzled veteran, methodical and thorough. Whereas Jimmy, though completely dedicated to the work, is brash and impetuous.

My biggest complaint of THE LITTLE THINGS is Leto’s role. He is such a phenomenal actor and Hancock’s script missed so many opportunities when developing Sparma. He’s just not scary enough --- and Leto is capable of being truly terrifying.

As with any crime thriller, flaws can make or break the outcome. THE LITTLE THINGS has its fair share of imperfections, the most egregious one has Jimmy getting into Sparma’s car with him and driving into the desert. But despite its mistakes, THE LITTLE THINGS is still just entertaining enough. And for that Hancock must be grateful for the work of Washington and Malek. They elevate this movie from a standard detective yarn to a slightly better-than-average neo-noir.

How is it possible to not recommend a film starring three Academy Award winners?? Well, I’m doing it here. Despite the presence of Denzel Washington, Rami Malek and Jared Leto, THE LITTLE THINGS is disappointing and not on a par with the talent assembled.

Denzel in a crime movie is usually a gripping affair --- think THE EQUALIZER or TRAINING DAY. For Malek and Leto crime thrillers are not exactly their forte. I have no problem with any of this trio’s performances, it’s the screenplay by writer/director John Lee Hancock, most noted for THE BLIND SIDE, that leaves much to be desired.

As cops looking to solve a string of murders of women, mostly prostitutes, Joe Deacon (Washington) and Jimmy Baxter (Malek) exhibit decent enough chemistry. Deacon is a former LA detective now working as a sheriff’s deputy in a small county and he harbors a dark secret which is revealed later.

The pair spend a good deal of the film monitoring the activities of one Albert Sparma (Leto) --- now there’s a name for a suspected killer. Leto is a scene stealer as the creepy Sparma who gives all indications that he has some involvement in the homicides.

THE LITTLE THINGS moves at a snail’s pace for much of its running time which may explain why I may have momentarily dozed off for a second and missed a “little thing” that is the denouement of the film. Nevertheless, the movie may maintain the interest of some viewers if only to see how the Sparma investigation turns out.

What the film does address is how far a police official will go to protect his own. Unfortunately, THE LITTLE THINGS lacks the edge-of-your-seat component that we have come to expect in a Denzel Washington crime thriller.