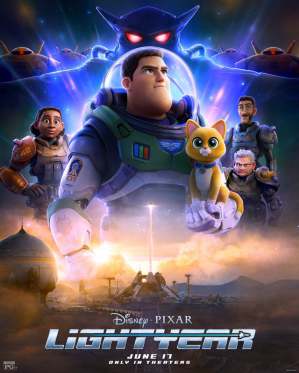 Perhaps LIGHTYEAR isn’t Pixar’s best effort, but it’s a darn good one. In the TOY STORY series, Buzz Lightyear was always the hero of the future, with Woody representing heroes of the past. But fortunately for Andy, these two toys forged a friendship that couldn’t be denied, despite which one might be Andy’s favorite.

When Andy saw the movie that made Buzz Lightyear a star, he had to have the action figure for his collection. Now 21 years later, fans all over the world get to experience what Andy did --- and understand the phenomenon that became LIGHTYEAR.

Heading back to Earth --- about 4.2 million light-years away --- after completing a mission, Space Ranger Buzz Lightyear (voiced by Chris Evans) and his commander, Space Ranger Alisha Hawthorne (voiced by Uzo Aduba), along with a rather large crew of more than 1,000, make a stop on planet T’Kani Prime. As they attempt to leave, Buzz, who is piloting their ship nicknamed the Turnip, makes an error in judgment and crashes, shattering their fuel cell.

Marooned until a new ‘hyperspeed’ crystal can be created, Buzz makes it his mission to fly every trial. His first attempt is a four-minute flight, which isn’t successful, and when he returns to T’Kani Prime, four years instead of four minutes have passed.

As the trials progress, and everyone, including Alisha, gets on with living their lives, Buzz is caught in the past. To alleviate some of the emotional transition when he returns and years continue to elapse, Alisha presents Buzz with a new robot companion, a cat named Sox (voiced by Peter Sohn).

Decades have gone by, and now Buzz must rely on a volunteer team of cadets called the Junior Zap Patrol, led by Izzy Hawthorne (voiced by Keke Palmer), Alisha’s granddaughter, to help him complete what he started. She has two allies, Maurice “Mo” Morrison (voiced by Taika Waititi) and Darby Steel (voiced by Dale Soules), and these three prove invaluable when Buzz meets up with Zurg (voiced by James Brolin), his nemesis from TOY STORY 2.

The Pixar team is at its best when developing stories about friendship, trust, courage and honesty. LIGHTYEAR does not disappoint and continues this tradition. A great deal of effort was put forth to give Buzz a well-deserved back story, and those of us who LOVE the TOY STORY series a chance to understand him better.

His goofiness and insistence that he could do all the things he believed he could is now explained. Initially Buzz gave audiences so much joy because he took himself so seriously --- a toy who didn’t know he was one. “To infinity and beyond”, Buzz’s constant expression, now has a more important meaning --- the friendship he established with his commander, Alisha, when the two of them touch fingers before every adventure they shared, repeating this mantra.

Evans honors Tim Allen’s tenure as the iconic Buzz Lightyear by trying his darndest to sound like Allen. His “voice” captures all the nuances of Buzz as he runs through the monologues he records into his wrist communicator. Having a Black female commander --- who is also gay --- is a step in the right direction for Disney. And Aduba does a great job making Alisha a role model for girls of all ethnicities --- everywhere.

As one would expect, Sohn as Sox creates a memorable character everyone of all ages will love. He’s adorable, smart and most importantly --- really fun for the kids. But that is what Pixar does best --- making their films enjoyable for anyone wise enough to indulge. Who doesn’t want to see Buzz go up against Zurg with a less-than-experienced team by his side? It’s pure Pixar magic.

Angus MacLane, who is responsible for the story and screenplay along with Jason Headley, is the perfect choice to direct. He began as an animator for Pixar in 1997 and has worked on quite a few films for them including TOY STORY 2 & 3, which is paramount in understanding Buzz and his contribution to the success of those films --- and LIGHTYEAR.

The designs, sets, costumes and CGI are spectacular, per usual. That’s all wonderful, but what really eclipses LIGHTYEAR is the outstanding original score by Michael Giacchino, whose resume reads like what dreams are made of. It’s impossible to overstate the importance of a dynamic score and with LIGHTYEAR, he demonstrates that fact again.

My only complaint is that Pixar has stopped producing the shorts before these features. Who can forget PIPER or BAO and so many others? C’mon Pixar --- bring back those treasures!

First and foremost, just to clarify: LIGHTYEAR is not a movie about Buzz Lightyear as we know and love him from the TOY STORY franchise. It is the film --- and this is explained at the beginning --- which Andy (the boy from TOY STORY, i.e., Woody’s “owner”) watched, becoming enamored with the main character Buzz Lightyear.

None of that really matters because LIGHTYEAR is highly entertaining! As expertly voiced by Chris Evans, we don’t really miss the work of Tim Allen, and he couldn’t be used here anyway.

Much of the movie is highly technical which will go over the heads of children and some adults. As a Space Ranger, Lightyear is on a mission to return to Earth after crashing on planet T’Kani Prime. But during his seemingly endless attempts to test the new fuel, there is a catch. He doesn’t age during what is supposed to be a short outing of a few minutes. However, when he returns to T’Kani Prime, he finds that everyone else has aged, something akin to four years compared to his four minutes or so in space. This is especially poignant when his Ranger commander Alisha Hawthorne (Uzo Aduba) gets old and is ultimately replaced by her granddaughter, Izzy (Keke Palmer).

Other notables in the voice cast include James Brolin, Bill Hader and Taika Waititi. But it is the introduction of a robotic cat named Sox that highlights LIGHTYEAR. He is voiced by Peter Sohn who has made a career out of voice roles. The antics of Sox are laugh-out-loud funny, and this mechanical feline truly steals the show.

Sox doesn’t provide the only humor in the film. An on-board computer named I.V.A.N. (Internal Voice-Activated Navigator) is constantly giving instructions to Buzz, which he detests. It’s a running joke. Veteran Mary McDonald-Lewis is the voice of I.V.A.N. and it’s interesting to note that she is also the voice of OnStar in your car --- if anyone actually uses OnStar other than turning it on accidentally. But I digress.

The animation in LIGHTYEAR is superb and proves once more that Pixar is as good as any studio in the world. The film is also Pixar’s first to be created for IMAX.

We talk about Oscar-winning composer Michael Giacchino a lot in our reviews. His music in LIGHTYEAR is at least as good as his best work. This film is definitely worth a second viewing.