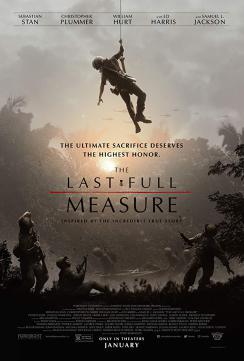 U.S. Air Force Pararescueman William Pitsenbarger did not have to stay behind when he was dropped by helicopter into the middle of one of the bloodiest battles of the Vietnam War on April 11, 1966. He could have escaped with his commanding officer Sgt. Tom Tulley, but instead chose to remain, saving nearly 60 men --- and most likely the helicopter and its crew after he waved them off. He performed his duties as a medic, then died fighting alongside soldiers he didn’t even know.

THE LAST FULL MEASURE, written and directed by Todd Robinson, a project Robinson worked on for over 20 years, is the true story of Pitsenbarger (Jeremy Irvine) and the 32-year struggle of his fellow combatants, led by Tulley (William Hurt) and his parents, Frank (Christopher Plummer) and Alice (Diane Ladd) to have him awarded the Congressional Medal of Honor posthumously. Robinson employs a fictional Pentagon staffer, Scott Huffman (Sebastian Stan), to drive the story.

Tasked by his outgoing boss, Carlton Stanton (Bradley Whitford), Huffman initially resents the assignment and begrudgingly sets out to interview veterans of the Army’s 1st Infantry Division who were in the Battle of Xa Cam My during Operation Abilene. Billy Takoda (Samuel L. Jackson), Jimmy Burr (Peter Fonda) and Ray Mott (Ed Harris) all witnessed first hand the bravery and dedication Pitsenbarger displayed on that fateful day.

Huffman also travels to Pits’ hometown to speak with his father and mother who are so anxious to see this huge honor bestowed upon their son. Frank has cancer, a reason why this award must happen as soon as possible. Guided by his pregnant --- and very wise --- wife, Tara (Alison Sudol), Huffman risks his entire career to bring this honor to fruition.

THE LAST FULL MEASURE is a truly emotional endeavor for Robinson who began this project after spending time with pararescuemen and hearing Frank speak at the dedication of a building in his son’s name at Kirtland Air Force Base in Albuquerque. And Robinson does an exemplary job of telling Pits’ story from which many lessons can be learned --- most importantly the power of persistence.

The well-written script utilizes flashbacks to illustrate the horrors of the Vietnam War, particularly this very deadly battle. We witness ourselves the valor of this 21-year-old selfless man, who could have very easily helicoptered away. It’s such a moving, riveting screenplay that I found myself quietly sobbing through most of it. It’s incredibly frustrating and sad to think of all the other young men who lost their lives in such a senseless war.

This marvelous saga deserves a stellar cast and Robinson has managed to assemble the perfect one. Stan pulls off the lead role with a deft touch. It’s a welcome departure from his recurring role as Bucky Barnes in the Marvel’s AVENGERS franchise. And of course, seasoned actors like Plummer, Hurt, Harris, Jackson, Fonda and Ladd bring so much depth to their characters, all of them turning in strong, believable performances. This was Fonda’s final role and, though small, his presence on screen is palpable. He resembled his father so much to me here --- so sad.

Had THE LAST FULL MEASURE been released in 2019 it surely would have made my Top 10 list. For whatever reason, it’s a January 2020 release, but could still be a consideration next Oscar season. Writer/director Todd Robinson has completed this 20-year project which is gripping and powerfully emotional. In this film, he has captured the friendships and camaraderie that only soldiers in battle can develop. And he has imbued his story with a supreme cast of veteran actors who render memorable performances.

The film is based on the real-life story of William H. “Pits” Pitsenbarger, an Air Force Pararescueman who, in the bloodiest episode of the Vietnam War in 1966, manages to save nearly 60 wounded soldiers. Pitsenbarger was killed during the battle and was ultimately denied his deserved Congressional Medal of Honor.

His closest friend and commander, Sgt. Tom Tulley (William Hurt), had tried for years to right this wrong and relieve some of the guilt he felt for surviving the war. Tulley is interviewed, along with several other survivors of the Battle of Xa Cam My. These include Billy Takoda (Samuel L. Jackson), Ray Mott (Ed Harris), Chauncey Kepper (John Savage) and Jimmy Burr (the late Peter Fonda in his last role).

But the common denominator that brings these men together to tell their stories and fight to provide Pitsenbarger his just recognition is a Pentagon staffer named Scott Huffman. The Huffman character is an amalgam of historian Parker Hayes, Robinson himself and others. Sebastian Stan portrays Huffman with a remarkable performance. Marvel fans know Stan as Bucky Barnes from AVENGERS films, but I believe Stan’s turn as Scott Huffman will be a career changer for him.

Huffman is married with a young child, and on a career path that promises only greatness. He is initially reluctant to take on the assignment of Pitsenbarger’s story, especially since it occurred over 30 years earlier. Gradually he becomes consumed with it, telling his pregnant wife, Tara (Alison Sudol), that he has reached his limit and is ready to abandon the project. In what may be the movie’s turning point, Tara gently prods her husband by reminding him that she never saw him quit anything. From that point on, Scott would not be deterred. Stan is totally credible and sympathetic as the behind-the-scenes hero of THE LAST FULL MEASURE.

Robinson could not get his script approved by Hollywood powers, so he decided to pitch his story on a spec basis. A longtime volunteer for Save A Warrior, a suicide prevention group, Robinson remains a “passionate supporter” of veterans, especially as it relates to PTSD. It is our good fortune that he persisted in getting this movie made.

Other cast standouts include Jeremy Irvine (WAR HORSE) as Pitsenbarger, and although he has limited dialogue, he performs physically demanding stunts. Linus Roache (TV’s “Homeland” and “Law and Order”) plays Secretary Whit Peters. Roache’s character emcees the ceremony at the film’s conclusion where Pitsenbarger is awarded the Medal of Honor posthumously. In attendance are Pits’ parents --- his dying father, Frank (Christopher Plummer), and his mother Alice (Diane Ladd). Roache reportedly rehearsed his inspirational and emotional speech --- in front of an audience that included many Vietnam War veterans --- 60 times.

William Pitsenbarger was an amazing human being. At one point amid the crucial battle scene in THE LAST FULL MEASURE, a soldier asks Pits “Why are you here?” His answer: “Because you are.”

This is one of those buried life stories about an unknown person that, on the surface, I imagine many people would ignore. However, not every script has to be about a monumental subject. Some of the most inspirational and emotional narratives we witness on film have their roots in relative obscurity. THE LAST FULL MEASURE is such a movie and should not be missed.