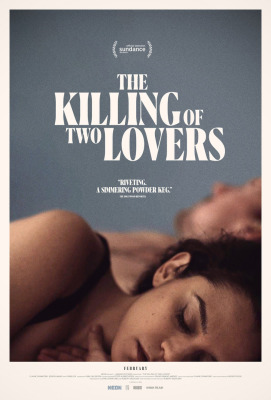 Set against the stunning backdrop of Kanosh, Utah, THE KILLING OF TWO LOVERS is a very small film, only 84 minutes long, that plants us in the middle of a married couple dealing with their current separation. It’s a deeply honest look at the ramifications of a possible failed marriage.

Clayne Crawford plays David, the estranged husband, who has moved back home with his father in this tiny town where everyone knows one another. He has agreed to give his wife, Nikki (Sepideh Moafi), some space, consenting to the idea that they could see other people.

But David doesn’t want to date anyone else. He only wants to be with his wife and their four children, Jesse (Avery Pizzuto), Alex (Arri Graham), Theo (Ezra Graham) and Bug (Jonah Graham). So, when he learns that Nikki is sleeping with Derek (Chris Coy), David toys with the idea of killing either Derek or both of them.

Written and directed by Robert Machoian, who also did the editing, THE KILLING OF TWO LOVERS is his first solo feature film. His previous productions were mostly shorts which he made with his directing partner, Robert Ojeda-Beck. And like THE KILLING OF TWO LOVERS, these other films focused on regular people as they went about living ordinary lives.

Machoian has a distinct style of long takes and wide shots bringing to mind Terrence Malick’s filmmaking. Machoian and his cinematographer, Oscar Ignacio Jimenez, used the idea of the long takes as photos from a family album. Everything about THE KILLING OF TWO LOVERS is very personal, especially David’s profound love for his children, and Jimenez captures this intensity with his camera.

Crawford is definitely the driving force behind THE KILLING OF TWO LOVERS and he is superb. He’s not exactly the handsome leading man type, but he is perfectly suited as this frustrated husband/father who is simply trying his best and only wants what he thinks is most important for his children. His performance is heartbreakingly clear and Machoian’s script is bereft of any nonsense or wasted words.

Though I didn’t love THE KILLING OF TWO LOVERS --- the dissonant background noises seemed gimmicky --- it’s still worth a viewing for Crawford’s portrayal and the stark beauty of the Utah landscape.

The name of this film alone would imply that a double murder is imminent at some point. When THE KILLING OF TWO LOVERS opens, we see a long-haired, bearded, husky individual hovering over a sleeping man and woman with a handgun pointed at one of them. It appears the man may have broken into their home and is about to commit mayhem when he is distracted by a noise in the home.

The scene shifts to the outside of the house where the man gets into his pickup truck and drives to another residence. Did he pull the trigger? This sense of foreboding is one that lingers throughout the film.

At the second house he greets his elderly father with whom he lives. The gun-toting guy is David (Clayne Crawford) whom we soon learn is separated from his wife Nikki (Sepideh Moafi) and a devoted father to his four kids.

Director Robert Machoian takes us on a compelling journey wherein David frequently interacts with his reticent teenage daughter, Jesse (Avery Pizzuto), and her three younger brothers. And of course, there are a number of scenes with Nikki as she and David try to work out their differences.

One of Machoian’s frequent techniques is reminiscent of filmmaker Terrence Malick’s style of incorporating long, slow shots at an exaggerated distance, so far away we cannot make out the faces of the actors. Somehow this works, best explained by the director himself. “When you film longer takes, you don’t allow the audience to relax, you remove the breathing room that multiple cuts often provide.”

Indeed, we cannot take our eyes off the screen for fear of potentially missing one of those “multiple cuts” Machoian cites. His script is concise, and Crawford maximizes the utility of the dialogue. His strong performance is the focal point that holds our interest. David’s kids adore him, so it is almost impossible to contemplate that he’s capable of a double homicide, even as he takes target practice on a mannequin.

We also learn that David and his wife have agreed to date other people during their separation. Nikki’s new interest is Derek (Chris Coy) which leads to the film’s stunning denouement. Coy plays Derek like the biggest d**k in the world, which may or may not resonate with viewers who consider his actions over the top.

Just as I was speculating in my mind how this story might conclude the screen went black --- and there it was. This sudden ending may not satisfy moviegoers who have invested 80+ minutes to this point. But upon reflection, it’s Machoian’s take --- he also wrote the

screenplay --- of what might be necessary to mend a marriage on the brink.