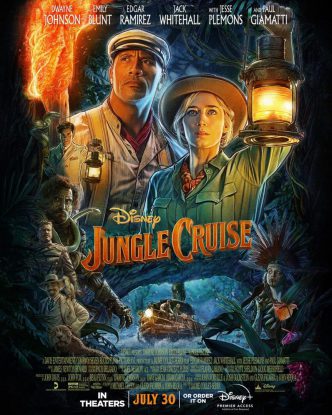 Disney has a propensity for making movies based on rides at their theme parks. The latest, JUNGLE CRUISE, has its origins in the very popular attraction at Disneyland when it first opened in Anaheim, California in 1955. Though not as spectacular as the original PIRATES OF THE CARIBBEAN movie, also based on a ride, JUNGLE CRUISE does have its moments of great fun and hilarity.

Starring Dwayne Johnson as Frank Wolff, the pun-spouting skipper of his beloved boat, La Quila, JUNGLE CRUISE takes the audience on an adventure-filled excursion down the Amazon River at the firm behest of Dr. Lily Houghton (Emily Blunt). In search of an extremely rare --- some would say non-existent --- flower that can cure all sorts of ailments and disease, Lily is dead set on accomplishing her goal.

Reluctantly tagging along is Lily’s very proper brother, MacGregor (Jack Whitehall), who would have preferred staying in London during this period of time, the height of World War I. But because she has always stood by him, MacGregor feels compelled to accompany her. And of course, this is the early 1900s when women weren’t exactly free to do as they pleased, though that hasn’t seemed to stop Lily.

Unfortunately, before she and MacGregor left London, Lily had a little run-in with Prince Joachim (Jesse Plemons), a wealthy German from whom Lily stole an ancient artifact --- the “key” to Lily’s quest. He and his nefarious minions have followed Lily to the Amazon, intent upon retrieving the stolen gem and finding the invaluable treasure for the prince.

In need of cash --- and hounded by Nilo (Paul Giamatti), the owner of all the other boats in the town of Porto Velho except La Quila --- Frank accepts Lily’s tempting offer despite his reservations. With Lily and MacGregor aboard, Frank and his pet “cat” Proxima begin a journey

which will change all their lives forever.

As I have written many times before, it’s all about the writing, and the team responsible for this screenplay, Michael Green, Glenn Ficarra and John Requa, are at their best when the movie focuses on Johnson and Blunt. These two have absolutely wonderful chemistry and that is paramount because JUNGLE CRUISE is basically a love story.

Things go awry with the minutiae of Prince Joachim and the conquistadors, led by Captain Aguirre (Edgar Ramírez). Both these characters are important to the storyline, but their screen time ---  and overlong fight scenes --- could have been shortened in the interest of a shorter run time.

At two hours and seven minutes, JUNGLE CRUISE slightly overstays its welcome. Like CRUELLA earlier this year, this movie is simply too long for children. Heck, David, the tall six-year-old, was even checking his watch --- though he did manage to stay awake. So, kudos to director Jaume Collet-Serra and his remarkable cast and crew for that.

And trust me when I use the word “remarkable”. Johnson delivers the corny puns with panache and Blunt is her usual adorable --- very accomplished --- self. The added comic relief by Whitehall, a well-regarded British comedian and actor, is a huge plus. His continual costume changes --- courtesy of Oscar-nominated designer Paco Delgado --- while traversing the Amazon River in deadly heat, are worth the price of admission. I love him --- he’s darling and a hoot.

Collet-Serra’s director of photography Flavio Labiano, along with three Academy Award winners, special effects supervisor JD Schwalm, head of makeup Joel Harlow and hair designer Adruitha Lee, have all contributed to this visually stunning experience. When you see all the extras in the Amazon jungle, you’ll know what I mean.

Add to this the splendid score by James Newton Howard, and JUNGLE CRUISE is a delightful treat for the entire family --- even grandma and grandpa. Whether it is Lily running across tree branches to try to catch a falling blossom or the La Quila on the verge of going over the falls, JUNGLE CRUISE is full of excitement and peril.

Modeled after the famous Disneyland ride, JUNGLE CRUISE is frenetic fun for literally everyone in the family. Spanish director Jaume Collet-Serra said it best: “The Jungle Cruise ride is one of the only rides the whole family can enjoy together. You can bring a baby and you can bring your grandma so we wanted to make a film that reflected that, a film that the whole family could enjoy together.” And the director and his massive crew have succeeded because at its core JUNGLE CRUISE is quite entertaining.

It helps, of course, to have two movie stars the caliber of Dwayne Johnson and Emily Blunt. The duo met for the first time on set and their on-screen chemistry is reflective of how well they got along off camera.  In fact, one issue with the filming was getting the pair to not laugh in the middle of a scene. Their back-and-forth jabs in the script --- he calls her “Pants” while she refers to him as “Skippy” --- will delight filmgoers as we speculate if the obvious romantic overtones will materialize.

Indeed, the movie is set in 1917 and women simply did not wear trousers then. But that doesn’t bother Dr. Lily Houghton (Blunt), a daredevil of a woman and natural do-gooder who will stop at nothing to find The Tree in the Amazon and the magic healing powers of its petals. JUNGLE CRUISE is actually shot mainly in Hawaii --- the logistics of using the actual Amazon River made it impossible --- but production designs by Jean-Vincent Puzos and set decorations by Larry Dias make it all look authentic. In fact, the JUNGLE CRUISE behind-the-scenes crew is a who’s-who of Academy Award winners and nominees. Eight-time Oscar nominated composer James Newton Howard provides the stirring score.

Lily hires Frank Wolff (Johnson), operator of a rickety old tourist boat called La Quila that takes visitors up the river and back again. True to the Disneyland tradition of the ride, Frank charms his customers with puns that will make you laugh out loud more than groan. “This formation on the right is actually sandstone, most people take it for granite. It’s one of our boulder attractions here in the park”, and (approaching headhunter territory) “We are now entering the most dangerous part of our journey. Shhh. . . This is a bad place to be headed.”

Accompanying Frank and Lily is her brother MacGregor (Jack Whitehall), a proper English gentleman who tries to bring multiple suitcases of clothing, et al, on board, but Frank makes sure most  ends up in the water. As the story progresses, MacGregor becomes more and more likeable, especially as he stands up to bullies along the way. Whitehall is a master of comedic timing and he also excels at physical humor.

Rounding out the main cast is Paul Giamatti as Nilo, a tourist boat competitor of Frank’s --- more of a nemesis, Edgar Ramirez as Aguirre, a 400-year-old conquistador and Jesse Plemons as Prince Joachim, determined to get a treasured artifact stolen by Lily so Germany can win the war. Giamatti’s time on screen is limited, but he’s always a delight. He has a talking cockatoo named Rosita on his shoulder --- and his costume design, courtesy of Paco Delgado, is outrageous. The movie bogs down a bit with frequent interruptions by Aguirre and Prince Joachim, but they are inherently necessary to provide obstacles to Frank and Lily.

Special effects guru JD Schwalm adeptly uses his CGI skills to make Frank’s pet jaguar Proxima look like the real thing. Proxima has quite a lot of screen time and provides some of the film’s best surprises. And there are a couple of very exciting sequences, most notably when Frank must maneuver his craft through wild rapids which end with a waterfall.

JUNGLE CRUISE briefly mocks the male-dominated society of World War I Britain as MacGregor delivers a searing chastisement to the stuffy all-white-male scientists who poo-poo his --- actually Lily’s findings. Collet-Serra’s camera shifts immediately to a group of women sitting in a balcony cheering enthusiastically.

With everything that JUNGLE CRUISE has going for it, the movie could have been shortened by at least 20 minutes. The conquistador scenes and the many shots of Joachim’s submarine scouting for Frank’s boat get a bit tedious. But the delightful repartee between “Pants” and “Skippy” makes it all worthwhile. Johnson and Blunt are a terrific comic team --- they make it look so easy.