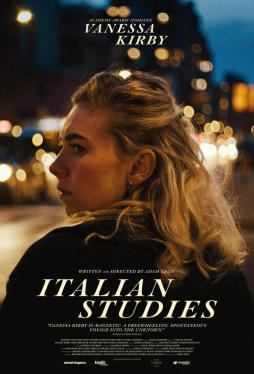 The existential crisis of a woman with no memory wandering alone in New York City is an interesting premise, especially when you have Vanessa Kirby starring as said woman. However, ITALIAN STUDIES is so disjointed --- it’s bloody all over the place --- that even Kirby can’t save this film.

First --- and foremost --- ITALIAN STUDIES begins with Alina Reynolds (Kirby), a writer and London resident, walking out of a building in NYC with her dog to presumably go for a walk. But Alina stops at a hardware store and ties up her sweet little white pup outside the front door. For the life of me, I will NEVER understand how people can do that, but --- I digress.

Alina ambles through the cramped shop, browsing, then suddenly exits, walks down the street leaving her bewildered pup behind. Perhaps writer/director Adam Leon was shooting for audacious realism here, but honestly, all I could think about for the rest of the movie was what happened to that poor dog?

And, unfortunately, from there it doesn’t get any better. Alina eventually meets a teenager named Simon (Simon Brickner), who befriends her and introduces her to the outlandish group he hangs with.

Leon is trying desperately to make Alina, Simon and his friends so relevant by allowing them the freedom to explore themselves and others via their musings on life, art and especially music. In my opinion, his experiment fails miserably.

Present day, flashbacks, dreams, imagined conversations --- it’s all too much --- and too confusing. After a while it’s easier to give up than to try to understand Leon’s point in all of this. The only saving grace of ITALIAN STUDIES is Kirby. She consulted with Leon about the script and her character. Alina is a perfect choice for Kirby had a few changes been made in the cohesion of the screenplay.

But, as it stands, ITALIAN STUDIES is a hot mess. And whatever happened to Alina’s adorable petit chien blanc?

ITALIAN STUDIES follows writer Alina Reynolds (Vanessa Kirby) as she meanders aimlessly around New York City. She has lost her memory, including her identity and the dog she tied up before going into a store.

She interacts with a bunch of NYC teens who philosophize about life and their (intended) precocious comments are neither eye-opening nor particularly insightful. Writer/director Adam Leon apparently had envisioned some higher purpose for these kids. Alina also has a tryst which defies explanation with their goofy friend Simon (Simon Brickner).

Kirby is a highly regarded actress, so it stretches the imagination why she accepted this role. It must have looked good on paper as she was deciding on the script. ITALIAN STUDIES is as confusing as a story can get, alternating incessantly between past and present. Overall, it appears Leon is trying way too hard to be ingenious and sophisticated when what he has delivered here is merely ingenuous.

Jeanne and I agree that we would not recommend this film to anybody lest they think we have lost our sense of what makes a movie interesting, entertaining, socially redeeming, or any other adjective that applies. I know for certain it will not entertain the masses.

Watch at your own risk.