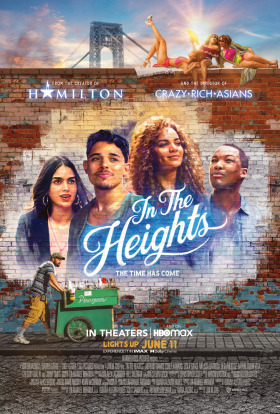 Just in time to jumpstart the summer, Lin-Manuel Miranda’s multiple Tony-winning musical stage play, “In the Heights” makes its debut on the silver screen. Based on the book by Quiara Alegría Hudes, who also penned the screenplay, and helmed by the director of CRAZY RICH ASIANS, Jon M. Chu, IN THE HEIGHTS is a bodacious reminder of what Hollywood musicals used to look like ---

Usnavi (Anthony Ramos), the corner bodega owner and narrator of the film, is keeping a foursome of cherubs enraptured with his stories of Washington Heights, the neighborhood in the northernmost part of Manhattan, which he (and Miranda in real life) calls home. Though he longs to return to the Dominican Republic --- his sueñito, or little dream --- to rebuild his father’s bar destroyed in a hurricane, his charming corner store is a focal point of the ‘hood.

It’s summer --- and stifling hot --- in the Heights and we are on a countdown to a Manhattan-wide blackout, unbeknownst to the residents. Meanwhile lives are playing out across the barrio. Sonny (Gregory Diaz IV), Usnavi’s teenaged cousin --- and sole employee --- is concerned about his status as a DACA. Vanessa (Melissa Barrera), a nail technician for salon owner, Daniela (Daphne Rubin-Vega, a real-life firecracker), has her own sueñito to become a fashion designer, living in downtown Manhattan.

Daniela and her spouse, Carla (Stephanie Beatriz), are being forced out of their location and moving their beauty haven to the Bronx. And Kevin Rosario (Jimmy Smits), who owns the local car service company --- and employs Benny (Corey Hawkins) --- has sold part of his business so his daughter, Nina (Leslie Grace), can return to Stanford University in California --- though she has decided to stay in Washington Heights with Benny.

And lastly, the loving matriarch of the neighborhood, Abuela Claudia (Olga Merediz --- who originated the role on Broadway), is the one to whom everyone turns for advice, though she never had children of her own. In one especially moving scene, Claudia explains to Nina how her late mother wore velvet gloves to hide her cracked hands, a result of endless hours cleaning homes for others.

At almost 2 ½ hours, there is plenty happening in IN THE HEIGHTS. The musical numbers, from the very first one to the remarkable “96,000” which culminates with a phenomenal, synchronized swim routine in the historic Highbridge Park public pool, to Claudia singing

‘Paciencia y Fé’ --- my favorite scene --- and not forgetting the rousing ‘Carnaval del Barrio’, are all astounding and memorable.

To whip this amazingly talented cast into shape, music supervisor Steven Gizicki utilized a “music boot camp”. Then choreographer Christopher Scott brought in additional experts to assist with all the various production numbers and styles of dance. The end result is a spectacular display of singing and dancing.

The four main characters played by Ramos, Barrera, Hawkins and Grace are perfectly cast and each couple has real chemistry. Ramos and Hawkins already possess impressive resumes, with Ramos taking over the role Miranda originally wrote for himself and starred in on Broadway. Barrera, who calls herself the stage musical’s biggest fan, left New York to become a star in Mexico. And Grace may be an acting novice, but she does have three Latin Grammy nominations.

My only criticism of IN THE HEIGHTS is the running time. Just like the very recent --- and not nearly as impressive --- CRUELLA, about 15-20 minutes of additional editing would make IN THE HEIGHTS just that much better.

If you’ve ever run under a spurting fire hydrant as a kid on a miserably hot day, you’ll appreciate a lot of what’s happening in

IN THE HEIGHTS. The new musical is based on the smash, Tony-winning Broadway play created by Lin-Manuel Miranda --- the “Hamilton” mastermind also appears in the film --- and is directed by Jon M. Chu of CRAZY RICH ASIANS fame. Other than a minor complaint of the movie being a bit too long, there is much to savor here. As for Miranda, he may soon be a member of the exclusive EGOT club for entertainers who have won an Emmy, Grammy, Oscar and Tony --- he lacks only an Oscar and seems destined to win one in some capacity for this film.

IN THE HEIGHTS was primarily filmed in Miranda’s own neighborhood of Washington Heights, New York, spanning nearly 40 blocks starting at 155th Street in northern Manhattan. Washington Heights has been the home to a variety of ethnicities over the years --- Irish, Italian and Jewish included --- and as presented in the film, now primarily Latino.

Featuring rousing dance numbers and often stunning choreography, it was critical for the filmmakers to find the perfect cast --- those who can dance, sing and, of course, act. The lead role of Usnavi, the youthful bodega owner --- the word means “wine shop” in Spanish --- was critical to fill.

Anthony Ramos, who had a dual role in “Hamilton”, was the choice and the filmmakers absolutely got it right. His character is at the center of almost everything, symbolizing the “sueñito” or small dream that is paramount to denizens of the Heights, especially younger ones who imagine stardom, wealth and fulfillment. In Usnavi’s case, he dreams of relocating to the Dominican Republic, home of his ancestry. But we learn that sueñitos can change with whatever life has to offer. Ramos is immensely likeable in the role.

Screenwriter and producer Quiara Alegría Hudes, who wrote the book for the original musical, has infused IN THE HEIGHTS with rapid-fire dialogue which is quite impossible to absorb in a single viewing. But every now and then I would latch on to some gems. For example, Usnavi was named by his father after he espied an American battleship with U.S. Navy on the side. Later in the film, Usnavi revels in his sueñito becoming reality with a line from IT’S A WONDERFUL LIFE: “I’m home, you old building and loan!”.

Miranda exudes sheer delight in his small role as the cart-pushing piragua guy --- i.e., sno-cone vendor. He wasn’t sure there would be a place for him in the movie, but Chu found a way. And Miranda gave his buddy Christopher Jackson from “Hamilton” --- fans of TV’s “Bull” will recognize him as Chunk the attorney --- a small non-speaking scene as the Mister Softee Guy competing with the sno-cone seller for neighborhood dollars.

Veteran actor Jimmy Smits went to an off-Broadway production of “In the Heights” and was so enamored he did voice overs for the show’s television ads. Smits is rewarded here with the major role of Kevin Rosario, owner of a car service and proud father of Nina (Leslie Grace, making her film debut) who attends Stanford University. But there is great strife in the storyline when Nina wants to stay in the barrio because she doesn’t want her father to sell any more of his company in order to cover her tuition.

Benny (Corey Hawkins) is an African American member of the community and Nina’s boyfriend. He is also Usnavi’s best friend. Hawkins, like the rest of the cast, is an accomplished singer and dancer with the popular film STRAIGHT OUTTA COMPTON on his resumé. One of the more endearing characters is Usnavi’s cousin Sonny played by rising star Gregory Diaz IV. The kid is a natural comic and a great complement to Usnavi as they run the bodega together.

Rounding out the lead players is Melissa Barrera as Vanessa, the much sought-after Latin beauty of the barrio. She is a reluctant nail tech (her suenito is to be a fashion designer) at the local Daniela’s Salon, run by actress Daphne Rubin-Vega. More on her in a bit. But Usnavi is completely smitten with Vanessa to the point he is conflicted about leaving for the DR. Barrera, too, is a terrific singer and actor.

As for Rubin-Vega, her character initiates one of the best dance routines when she incites the heat-depressed crowd. The neighborhood is in the grip of an electrical blackout amidst 100+ degree temperatures and folks sit around fanning themselves or soaking their feet in buckets of ice. But she will have none of that and what ensues is a tremendously entertaining number, ‘Carnaval del Barrio’.

In some of the dance sequences there are as many as 500 extras. Kudos to choreographer Christopher Scott, editor Myron Kerstein and Director of Photography Alice Brooks for pulling it all together. These routines are so spectacular they’re almost surreal. The sheer athleticism, precision and coordination are amazing.

Lovers of movie musicals will glom on to their own favorite dance routines in this film. Mine is called “96,000” which refers to a lottery ticket worth that much sold at Usnavi’s bodega. It reminded me of a tune from “Rent”.

Ultimately IN THE HEIGHTS is a spirited, high-energy adventure of a close-knit community that finds its humanity in the middle of a sweltering summer. It’s a superb mix of all ages, and Usnavi’s chat with four little kids throughout the movie is a highlight.