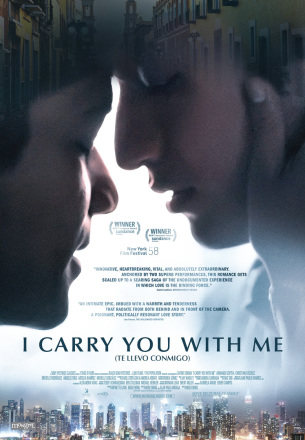 Documentarian Heidi Ewing, who was Oscar-nominated for her amazing and eye-opening film JESUS CAMP (2006), has made her first narrative movie, I CARRY YOU WITH ME, which she co-wrote with Alan Page Arriaga. Frequently those of us born in the United States have given little thought to achieving the American Dream, but Ewing’s subjects, Iván and Gerardo, are the antithesis of that. For them, as illegal immigrants, striving toward that goal has meant everything.

Ewing had been friends in New York City with Iván and Gerardo for years, but it wasn’t until a late-night pizza outing at Sundance in 2012 that she learned the real story of these two lovers. Using actors to portray them as children and young adults was mandatory, but to keep the story as honest and heartfelt as possible, since it is based on their real lives, Ewing felt no one could portray them as they are now but her two friends themselves.

It’s obviously a bold move, one that Ewing was completely comfortable with as a documentary filmmaker. She was able to film them off and on over the years, so the latter part of I CARRY YOU WITH ME with Iván and Gerardo as older adults is unscripted. It’s a masterful achievement because there are times when there is virtually no dialogue, only long moments of quiet expression which speak volumes.

I CARRY YOU WITH ME is a decades-long telling of two young boys, Iván (Yael Tadeo) and Gerardo (Nery Arredondo), who know they are different from their macho counterparts in Mexico. Being homosexual in their native country is extremely difficult and dangerous. And as they grow into adulthood played by Armando Espitia and Christian Vázquez, things for them become even more unbearable.

Iván has fathered a child, a son, but he is unable to sustain a relationship with the boy’s mother. Aspiring to become a chef, he works tirelessly to support his child. But once his love for Gerardo is exposed, Iván determines that his only chance to make a life for himself --- and Gerardo --- is to cross over the border into the U.S.

Promising his son and his lover that he will return within a year, Iván and his best friend, Sandra (Michelle Rodríguez), begin the arduous journey with a small group and a coyote. But after a few months in New York City, Sandra hasn’t found any suitable employment and decides to return to Mexico.

Iván struggles to make enough to support himself and send funds back to his son by delivering food for a local restaurant. As luck would have it, one night when he is there picking up food to deliver, an argument breaks out in the kitchen and the owner fires one of his line cooks. Iván convinces the owner to give him a chance, and his career as a chef has begun.

After too long apart, Gerardo finally crosses the border and makes his way to Iván. Together they build a successful life and business --- Iván now has his own restaurant --- thus achieving their own version of the American Dream.

But the unending sorrow hanging over them is the absence of Iván’s son. He is now 20 and after many attempts, he is still unable to secure a visa to visit the United States. And though Iván longs to return to Mexico to see him, as an illegal, he would never be permitted to enter this country again. And the idea of trying to cross again is out of the question.

I CARRY YOU WITH ME is an incredibly quiet, small film which wields enormous impact as a love story --- and a powerful reminder of why people die trying to come to this country. The strength of courage these two men exhibit in an effort to establish better lives for themselves against all odds in a country not always accepting of immigrants, especially gay ones, is formidable.

Ewing’s filming techniques also enhance the beauty of I CARRY YOU WITH ME. She and her cinematographer, Juan Pablo Ramírez, decided early on to always film something --- anything --- at dusk, what she refers to as the “magic hour”. And her employment of Espitia for the voiceover narration, something often used by Terrence Malick, is particularly effective.

There is so much to be gleaned from I CARRY YOU WITH ME, along with the incredible performances by the entire cast. Ewing’s choice to use the real Iván and Gerardo greatly enhances the importance of the message here summed up best by this quote from Gerardo’s statement in the production notes: “I want people who see this film to take away a message of hope. I want them to see that those of us who migrate there from other countries in search of opportunity are good people and we have much to offer. We have love to give, and we work so hard to turn our dreams into reality.”

I CARRY YOU WITH ME is an odyssey about the difficult choices people face in life, and to what extent they will go to attain their dreams. It is also a film that touches on the ugliness of homophobia and the pitfalls of illegal immigration. But what truly makes this movie remarkable is the journey of its co-writer and director, Heidi Ewing.

She has carved out a career as a documentarian, most notably the searing and riveting JESUS CAMP from 2006 (along with co-director Rachel Grady). If you missed that Oscar-nominated gem it is an amazing piece of work that you should find wherever you can.

I CARRY YOU WITH ME is Ewing’s debut as a narrative filmmaker. It has been nearly 10 years in the making beginning with a conversation she had over pizza with two friends named Iván and Gerardo. It was a story she could not dismiss, and she knew it was a movie she had to make. Entertainment icon Norman Lear oddly stands out in the closing credits as an executive producer. Proving relationships in the film industry are crucial, Ewing had helmed a doc about the soon-to-be 100-year-old giant in 2016 entitled NORMAN LEAR: JUST ANOTHER VERSION OF YOU.

Iván and Gerardo are a gay couple in real life. I CARRY YOU WITH ME is their story and it is an intriguing one. Iván (Armando Espitia) lives in Mexico, apart from the mother of his son, Paola (Michelle González), but completely involved in his young boy’s life --- as long as Paola approves. One night in a gay bar Iván meets Gerardo (Christian Vázquez), a handsome young man who will become his life partner.

Iván is a talented cook and wants to be a chef but can only find menial work in Mexico. He uproots himself by getting to the U.S. illegally --- albeit not without ordeals, accompanied by his lifelong friend, Sandra (Michelle Rodríguez). He leaves behind Gerardo, his abusive father, Marcos (Raúl Briones), and his son, promising his boy and Gerardo he will only be gone a year. But life has a sometimes unfunny way of upsetting the best laid plans.

When the movie shifts to its third act, it seemed to morph from a drama to a documentary --- and with good reason. Ewing cast the real

Iván and Gerardo to play their older selves in New York City, even though they didn’t look exactly like the actors playing them as twenty-somethings. It’s a unique methodology in filmmaking and it works beautifully.

I CARRY YOU WITH ME is not a film that is easily dismissed. It is very well acted --- Espitia and Vázquez carry most of the load --- and we are consumed by their plight. The movie has a touching “kindness of strangers” moment, like the woman in her car across the border who offers water and snacks to Iván and Sandra who haven’t realized they are actually in America. Then there is the opposite sentiment when Gerardo and a gay friend are accosted by thugs in Mexico who beat the pair on the street.

As we journey with Iván from his days as a dishwasher all the way to restaurant owner, he has amazingly achieved his version of the American Dream. But at what price?