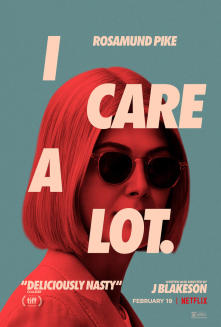 I CARE A LOT, the newest release from Netflix, covers just about all the current societal ills we are facing: greed, corruption, lack of empathy, elder abuse and lastly, gun control. Written and directed by J Blakeson, I CARE A LOT immediately grabs your attention with a scene played out in the entrance of an upscale assisted living facility and doesn’t let go. Though there was a period about three quarters of the way through that almost made me stop watching --- don’t, because the ending is worth the wait.

Tough as nails Marla Grayson (Rosamund Pike) owns a professional guardianship business which she runs with her lover, Fran (Eiza González). She has secured dozens of elderly wards through less than scrupulous measures, most of them court-appointed by Judge Lomax (Isiah Whitlock Jr.). After she has them placed in residences run by her co-conspirators, like Sam Rice (Damian Young), she and Fran seize their assets, selling off their homes, furniture, etc.

One of her other allies, Dr. Amos (Alicia Witt), has a new client for Marla, a “cherry”, a wealthy woman named Jennifer Peterson (Dianne Wiest) who has no family or heirs. Fran and Marla go to work on her --- they have her committed to their favorite home, where her cellphone is taken away and she is pumped full of drugs to keep her docile.

The two swindlers clean out her house, put it on the market and even unload her safety deposit box at the bank. The contents of one of the pouches found is so startling, Marla and Fran are beginning to wonder who Jennifer really is. Meanwhile, a local drug lord, Roman Lunyov (Peter Dinklage), is in a rage because he cannot find his mother.

I CARE A LOT is a dark comedy/thriller. Blakeson’s screenplay gets off to a roaring start as we watch in horror at how proficient Marla and Fran are at their “job”. They run their con like a well-oiled machine, and when Dean Ericson (Chris Messina) shows up to offer Marla a large sum of money for the release of Jennifer, she simply scoffs --- and asks for a cool five million. At this point she still doesn’t know Jennifer’s real identity --- and the dangerous person behind the ask.

At a run time of two hours, I CARE A LOT is a little too long. Blakeson’s story gets bogged down at about the three-quarter mark, and even becomes a tad absurd. Marla and Fran pull off a kidnapping that tests our beliefs, and then Marla herself manages to escape a rather certain death. It’s at this point that I became somewhat aggrieved by I CARE A LOT, but Blakeson does manage to redeem himself with his surprise ending.

None of these people are any good --- and I usually have a tendency to root for the women, but in this case, I found myself totally against Marla and Fran. Their disdain for the elderly is as overwhelming as their love of money. Pike is simply phenomenal as the hard-nosed guardian. This is a spectacular role for her, giving her a great deal of latitude to show off her acting skills. She’s diabolical as Marla --- and a hoot.

Wiest is perfectly cast as Jennifer, especially when she revels in her secret --- taunting Marla with what she doesn’t know. And watching her try to make a break for it out of the home with a couple of thugs is classic Wiest.

The entire cast is superb, but my favorite is --- and always will be --- Dinklage. Obviously, we all know he is unmatched at playing the “bad guy”, and as Roman, he doesn’t disappoint. Whether he’s threatening his henchmen, throwing a smoothie at a window or selecting pastries, Dinklage has a presence way bigger than his stature. Since his breakout role in THE STATION AGENT in 2003, one of my much-loved films, along with a lovely role in LASSIE in 2005, and of course Tyrion Lannister in “Game of Thrones”, and so many others, Dinklage continues to delight audiences with his breadth and skill.

I can promise that I CARE A LOT will horrify and frustrate, but it’s definitely worth the effort. It’s considered a thriller for a reason.

Some horror films feature psychotic killers. Others showcase fiendish creatures. But the most effective ones prey on our fears that what we are witnessing might be possible in a real-life setting. Such is the case with I CARE A LOT.

This movie is not billed as a typical horror film --- merely a thriller --- but its premise and most critically its presentation are certainly horrific. Be wary of developing tight knots in your stomach. However, if you have an appetite for an original, well-conceived plot with flawless acting --- this is one you’ll want to see.

Marla Grayson (Rosamund Pike) is an attractive guardian of elderly people assigned to her by a friendly and naïve Judge Lomax (Isiah Whitlock Jr.). Sam Rice (Damian Young) is the manager of an assisted living facility that houses these assigned individuals. Fran (Eiza González) is Marla’s partner in this enterprise as well as her lesbian lover.

When an unkempt fellow named Feldstrom (Macon Blair) attempts to visit his mother, he is rebuffed by a burly security guard and the two become embroiled in a physical confrontation. The matter is soon to be resolved in civil court where Feldstrom pleads his case, but he is no match for the canny Marla, representing herself, or Judge Lomax who takes her side.

A close-up of Marla after the judge’s decision reveals an ever-so-slight smirk and we know something is not right. Even Marla’s severe blunt-cut hairdo suggests something nefarious, and in Pike’s capable hands, Marla appears to be capable of something truly unsavory.

We will soon learn the extent of Marla’s insidious business that ensnares unsuspecting elderlies and swindles them out of their money --- and often their homes. Her partner Fran is equally as bad and we can only hope their scheme is uncovered and vengeance is done.

When Marla learns of a “cherry” named Jennifer Peterson (Dianne Wiest) from Dr. Amos’s (Alicia Witt), her ally’s term for an easy mark with no surviving family, Marla and Fran are eager to add this wealthy widow to their growing list of wards. But they will soon realize in this instance they may have finally gone too far.

I CARE A LOT seizes the audience’s attention from the very beginning. Veteran actor Peter Dinklage has yet to make an appearance in the story, but when he does, his character, a Russian thug Roman Lunyov, will have something to say about the “abduction” of Ms. Peterson.

The film does beg credibility in a couple of scenes. For one, Marla holds her breath for an inordinate amount of time to escape a watery death. We’ll overlook that sort of unlikely absurdity, despite it being incredibly well photographed, because the script, written by director J Blakeson, is so taut, concise and disturbing.

The first half of I CARE A LOT is a breathtaking jaunt into the cruelty and greed of some despicable people, but again, we await their chastisement which surely will follow --- or will it? That question is not answered until literally the final scene.

Blakeson has peppered his film with an equally adept supporting cast. Chris Messina plays no-nonsense attorney Dean Ericson. His verbal joust with Marla in her office is a fascinating exchange of dialogue. A mob cab driver named Alexi Ignatyev (Nicholas Logan) is not nearly the patsy to whom we are introduced earlier. Dr. Amos in cahoots with Marla and Fran suggests that not all doctors are worthy of their Hippocratic oath. And Young’s turn as the smarmy Rice is perfect.

The score for I CARE A LOT deserves special mention, as well. Marc Canham has worked with director Blakeson before and his compositions for the film are uniquely eerie and effective.

Wiest is remarkable in her small yet impressive supporting turn. The double Oscar winner exhibits just the right amount of consternation and feistiness one might expect from an intelligent woman who has been wronged. González is conniving and scary in her own right as Fran.

And it doesn’t matter what role he tackles --- Peter Dinklage always manages to dominate every scene. The man is a consummate actor and here he plays a divine villain. But as pernicious as his character may be, he does love his mother.

However --- make no mistake. I CARE A LOT is Rosamund Pike’s movie. Marla Grayson is unquestionably the conscienceless center of the evil plot to ruin lives so she may satisfy her predatorial greed. In the process she makes Nurse Ratched look like a saint.