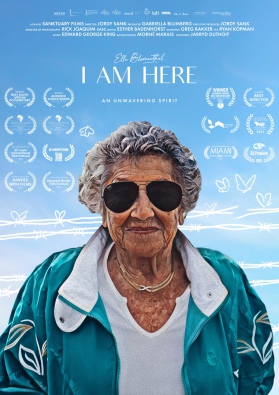 We take these two words, “Never again” too lightly, I believe, but for Holocaust survivors and their families, it is a mantra to live by. Director Jordy Sank’s beautifully moving documentary, I AM HERE, about 98-year-old Ella Blumenthal captures the horrors of one of the darkest chapters in history, while also reminding the audience of the importance of love, family and an appreciation for life.

Ella was 18 when Hitler and the Nazis began rounding up Jews in Poland. At age 19 she was in hiding during the Warsaw Ghetto uprising. She and the rest of her family ---

23 in all --- were sent to various camps. Fortunately for Ella, she and her niece, Roma, were together at Madjanek, the first of three concentration camps which they would survive.

From there they went on to Auschwitz, then finally Bergen Belson, where they were finally liberated. To illustrate Ella’s “unimaginable memories”, Sank and his team utilized 2D animation. He opines that it “paints a clear picture of moments that only Ella could see”, and it is very effective in telling Ella’s story.

As one of the last remaining Holocaust survivors, watching Ella as she relates the horrific details of her ordeal to those family members and friends surrounding her --- and then transforming into the life of the party is a testament to her incredible strength and courage. Following her release from Bergen Belson in 1945, Ella lived in Paris, then Tel Aviv where she met her husband, and moved with him to South Africa. She presently lives in Cape Town, along with her children and grandchildren.

I AM HERE is an eye-opening experience, especially for those of a much younger age who may be unaware of the atrocities committed against the Jews during World War II.

It’s also incredibly life-affirming because of Ella’s unbelievable attitude. She remains steadfast in her resilience, positivity and overall appetite for life. Her ability to see past her bleakest memories and always maintain hope is the inspiration we all need, especially now.

Packed into this 85-minute documentary are the vivid memories of Ella Blumenthal, a Holocaust survivor who was 98 years old at the time of filming in 2019. She turned 100 this past July. I AM HERE is a stark reminder that we cannot ever forget the horrors of Nazi Germany, and more importantly, ensure that future generations understand and appreciate what took place.

Movies like this --- and so many before it --- are essential to world history. If anyone is challenging if we really need another concentration camp survivor film, think about this. Do we really want anyone 20 years from now --- high school students, perhaps --- asking questions like “Who was Hitler?” and “What’s a Holocaust?”

Ella was 18 at the start of World War II. She and her niece Roma endured five years in three different camps, including Auschwitz, after the German invasion of Poland. Why only her niece? Ella lost all her other family members, 21 in all, including her father, to gas chambers. Her will to survive even as others around them were dying --- at least one by the hangman’s noose to set an example --- Is incredibly intimate and inspirational. Ella’s story is told largely through simple 2D animation, and some archival footage of the Nazi occupation of Poland. The abject cruelty soldiers inflicted on Jewish citizens is still shocking.

Ella met and married her future husband after only 13 days of courtship. They settled in South Africa. Surrounded in the film by her children, grandchildren and great-grandchildren, she expresses disbelief that she is truly free and isn’t dreaming --- 73 years after the war ended! Ella still has a fear that the Nazis will take her children away.

I AM HERE opens with journalists interviewing Holocaust deniers, one moron in particular who considers himself of pure blood, not like the Jews whom he calls mixed mongrels. Could this happen again? It’s an interesting topic for discussion, one that Jeanne and I have had. This documentary is a riveting piece of filmmaking by South African director Jordy Sank.