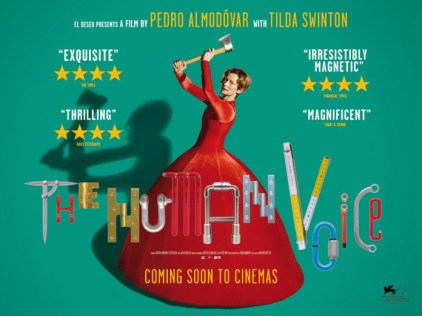 Tilda Swinton stars in Pedro Almodóvar’s latest, THE HUMAN VOICE, a short film --- 30 minutes --- based on Jean Cocteau’s 1928 play of the same name. Accompanied by an exquisite soundtrack by Alberto Iglesias, a frequent collaborator of Almodóvar, Ms. Swinton and Dash, the dog, wait in a beautifully decorated loft apartment surrounded by a darkened sound stage for the return of her lover.

Ms. Swinton, with Dash in tow, enters a hardware store where she purchases an ax under the wary eye of the proprietor (Agustin Almodóvar, Pedro’s brother). Back at home, the suitcases belonging to her amour are stacked at the front door awaiting his arrival. It’s been three days since she has heard from him and her emotions are running the gamut.

One minute she’s calm, talking to Dash, who is equally distraught, the next she’s smashing a wine glass, among other things. In a fit of rage, she hacks with her new purchase a suit belonging to him which she has laid on their bed.

She opens a nightstand drawer filled with multiple prescription bottles and chooses pills from several --- washing them down with a glass of wine. In a stupor, she doesn’t hear the phone ring, but Dash licks her feverishly until she awakens. Alas, she is too late. The caller --- presumably her lover --- has hung up.

When eventually he calls back --- the conversation is entirely one sided --- we watch and listen as Ms. Swinton goes through a wide and varied range of feelings. She knows it’s the end of this once-passionate affair, and even still she tries desperately to convince him to take Dash, his pet who patiently waits by the door for his return. But that is not to be, so Ms. Swinton makes a bold decision to change her life --- and Dash’s.

Almodóvar has a long history of championing women going back to one of my all-time favorite films, WOMEN ON THE VERGE OF A NERVOUS BREAKDOWN (1988). And he’s never stopped, with THE HUMAN VOICE and Ms. Swinton as the perfect example of his continued efforts to highlight the constant struggles of women. And he could not have chosen anyone more suited to play the jilted female than Swinton.

Ms. Swinton’s acting has always been carefully nuanced, and here she makes a meal of Almodóvar’s beautifully adapted screenplay. She’s so very elegant, beginning with the first shot of THE HUMAN VOICE featuring her in a stunning red Balenciaga dress, which is just one of many spectacular costumes by Spanish designer Sonia Grande. This is a woman on the verge, and Swinton doesn’t hold back on anything --- except tears. And as she comes to terms with her --- and Dash’s --- new fate, she delights the audience with her brash revenge.

Almodóvar is one of the most accomplished writers and directors working today. THE HUMAN VOICE is another in a long line of brilliant works. At 30 minutes, this is something which can be viewed multiple times --- a must if you are to catch every single expression offered by the incomparable Tilda Swinton.

Pedro Almodóvar is not exactly the most traditional movie director of our time, but he may be the most unconventional. His films always generate critical interest not to mention all the awards he has garnered.

Now he has created THE HUMAN VOICE, a 30-minute film starring Tilda Swinton in what amounts to a one-woman show. Almodóvar’s 1988 film WOMEN ON THE VERGE OF A NERVOUS BREAKDOWN comes to mind as Swinton’s erratic behavior gives the appearance of a woman who may be on the verge of some kind of a mental breakdown.

This film is based on the play by Jean Cocteau written in 1928. There is another version of THE HUMAN VOICE made in 2018 starring Rosamund Pike. That short was only 19 minutes long.

In the Almodóvar production --- which he also wrote --- Swinton interacts briefly with the proprietor of a hardware store where she purchases a small hatchet. Other than that, she shares the screen only with her dog Dash until the last few minutes. Dash becomes an important supporting player as she tries to explain to the canine that he has a new master.

Swinton’s extraordinary performance makes it nearly impossible to look away from the screen as she endures the emotional conclusion to her love affair. And she makes use of the aforementioned hatchet in a rather unusual way, which is painful to witness on many levels.

One aspect of THE HUMAN VOICE is undeniable. I would bet the opening and closing credits are nothing seen before in any motion picture. They are most imaginative.