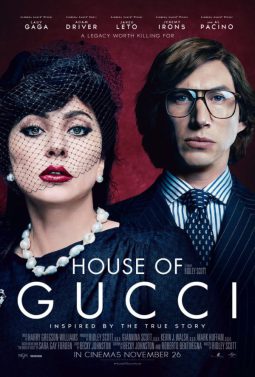 Ridley Scott --- and his wife Giannina, who worked on this project for 20 years --- in his own inimitable way, brings this true story of love, lust, greed, power --- and murder --- to the silver screen. HOUSE OF GUCCI is a riveting tale of how all the afore-mentioned attributes can bring down an empire.

Unless you’ve been living under a rock, everyone knows and recognizes the Gucci brand. It has been one of the premier fashion houses in the world started 100 years ago by Guccio Gucci in Florence, Italy. When HOUSE OF GUCCI begins, it is the late 1970s and the wildly successful business is being run by the founder’s two sons, Aldo (Al Pacino) and Rodolfo (Jeremy Irons).

It's a critical time for the Gucci empire. Aldo’s only son, Paolo (Jared Leto --- totally unrecognizable), is more interested in becoming a fashion designer than running a business. And Aldo, who thinks his son is an idiot, has no intention of ever letting him.

Rodolfo’s son, Maurizio (Adam Driver), is solely focused on becoming a lawyer, wanting nothing to do with the family business. That is, until he meets --- and marries against his father’s wishes --- the stunning and very ambitious Patrizia Reggiani (Lady Gaga). Together with Aldo, she convinces Maurizio to join the Gucci company, and eventually after his father’s death, Maurizio and Patrizia have Aldo sent to prison for fraud and take over Gucci for themselves.

No longer the shy young man he was when he first met Patrizia, Maurizio’s entire persona has changed. He’s more stylish and confident --- and he has fallen out of love with Patrizia. Instead, he has taken up with an old childhood friend, Paola Franchie (Camille Cottin). Headstrong as ever, Patrizia will not be denied. Egged on by her psychic, Pina  Auriemma (Salma Hayek), who has become her constant companion, Patrizia concocts a wild scheme of revenge.

HOUSE OF GUCCI has it all when it comes to family intrigue and betrayal beginning with the knock-out performance from Lady Gaga. She’s electrifying --- you simply cannot take your eyes off her. Every scene with her presence crackles and pops --- plus she looks fabulous in all the Gucci designs. Going from a wide-eyed beauty with her sights set on the Gucci heir to the discarded wife is just another day on set for Ms. Gaga --- she’s that good.

And thankfully, she and Driver have amazing chemistry. He’s such a minimalist --- every half smile or turn of the head means something. And his transition from an over-protected son to a rather ruthless power monger is seamless and totally believable. Both Gaga and Driver are mesmerizing --- with Gaga a clear frontrunner for an Oscar nod.

But you can never count out Pacino. He almost steals the film. Aldo is a sly bastard and you can tell Pacino is reveling in his performance. He’s so perfect, especially when he’s calling his poor son an idiot to his face. Leto plays the unfortunate son with a bit too much camp, but his complete makeover is astounding.

HOUSE OF GUCCI isn’t all about the acting. Since it is Gucci, with Scott directing, the film has an incredible look and feel. Not only are the costumes exquisite, but the set designs and locations are breathtaking. Everything looks luxurious as one would expect when detailing the personal lives of the owners of one of the foremost fashion brands on the planet.

If you are a Lady Gaga fan, you absolutely must see her Patrizia portrayal. Or if you are obsessed with the machinations of the rich and famous --- and their undoing --- then HOUSE OF GUCCI is highly recommended.

HOUSE OF GUCCI tells the true story of the Gucci family members’ rise and fall in the fashion industry. Helmed by acclaimed director Ridley Scott and featuring an all-star cast of Academy Award winners and nominees, it is a fascinating study of greed, pride and betrayal.

Starring Lada Gaga as Patrizia Regianni and Adam Driver as Maurizio Gucci, the film begins about 70 years after the Gucci line was first established. As for Gaga, she has to be in the mix for Best Actress which is shaping up as an impossible-to-predict category for 2021. And Driver, who seems to be everywhere these days, displays an acting range that is limitless. Whether he’s a Medieval jousting knight (THE LAST DUEL, also a Scott film) or a calm and measured businessman in a three-piece suit (for a while, at least, in HOUSE OF GUCCI), he has risen to the top ranks of cinema talent.

Rounding out the main cast are Al Pacino as Gucci co-owner Aldo Gucci and Jeremy Irons as Aldo’s brother and co-owner Rodolfo Gucci. An unrecognizable Jared Leto is Aldo’s son, Paolo Gucci. The prosthetics used to make Paolo both a comic and pitiable individual in the Gucci clan would not give anyone a hint that Leto is behind the makeup. It’s truly remarkable as is his performance.

Pacino and Irons have not lost a step in their storied careers. Their screen presence is still undeniably strong. I also give a shout out to Youssef Kerkour who plays the CEO of an investment company eager to buy out the 50 per cent Gucci share of Aldo and Paolo. It’s a small but convincing performance.

If that’s not enough star power for you, consider that Salma Hayek plays a fortune teller/TV pitch woman named Pina. When Patrizia dials Pina’s 800 number they become fast friends, and as the story progresses, Pina’s influence on Patrizia evolves from a fluff scenario to one of complicity in a murder plot.

The big question in HOUSE OF GUCCI revolves around Patrizia and her motive in marrying Maurizio. Was it for love or only for money as Rodolfo firmly believes? What is certain is that Patrizia and Maurizio certainly look like they’re in love in the early stages. The mild-mannered Maurizio is smitten by the sexy, flirtatious Patrizia, and they seem destined to be a happy couple. Gaga’s performance, in particular, is one that stays with you long after the film’s conclusion.

The closing remarks at the end of the movie reveal everything we need to know about this sordid tale. HOUSE OF GUCCI is easily one of the best films of 2021.