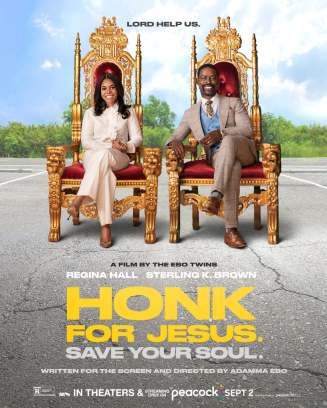 HONK FOR JESUS. SAVE YOUR SOUL. is billed as a satirical comedy and though there are a few laugh-out-loud moments, the film overall is not very funny. Writer/director Adamma Ebo has chosen the mockumentary style of filmmaking, a la Christopher Guest,  to get her points across regarding the hypocrisy of megachurches, particularly those which are driven by greed.

Lee-Curtis Childs (Sterling K. Brown) is the pastor of Welcome to Greater Paths Baptist Church in Atlanta. Before his fall from grace due to allegations of inappropriate behavior with minors --- young men and boys upon whom he lavished expensive gifts and cars --- the congregation boasted over 25,000 members.

Along with his dynamic wife, Trinitie (Regina Hall), this power couple had it all --- fame, fortune and a ministry successful beyond their dreams. Now Lee-Curtis has hired a film crew to follow their every move as they try desperately to reestablish themselves --- and their church to its former glory.

Ebo and her sister Adanne, who produces, manage to expose the unseemly side of organized religion and all its foibles, but Adamma’s script doesn’t elicit enough laughter. There are definitely some missed opportunities for deeper revelations, which could have been brought forth with greater hilarity.

Beginning with the Childs’ outrageous --- and frankly grotesque --- lifestyle, including multiple Prada suits, Italian shoes, dresses, handbags, luxury cars etc. --- and their mega-mansion --- there is a treasure trove for fodder.

Instead Ebo focuses on a specific hat costing over $2000 which Trinitie selects for the first Sunday service back in their church. Lee-Curtis hates the chapeau, but Trinitie is bound and determined to wear it. And it’s not at all amusing.

Fortunately, what Ebo does have are two absolutely fabulous actors. Brown and Hall are perfectly suited (no pun intended) and extremely impressive. Watching Hall on the side of the road all decked out in her Sunday best holding up her sign asking car drivers to “Honk for Jesus” is unparalleled, especially when her husband convinces her to cover her beautiful face in white greasepaint as a mime. She’s brilliant.

And Brown is equally spectacular --- and convincing --- as the silver-tongued pastor who’s throwing everything/anything at the proverbial wall hoping something will stick and “his” congregation will come back to him. The two of them sitting on their golden thrones on the ”stage” in their house of worship is priceless --- and spot on.

HONK FOR JESUS. SAVE YOUR SOUL. is not much of a comedy, but Ebo’s exposure of the hypocrisy is damning. Plus, she has two highly talented and accomplished actors to assist in her efforts.

HONK FOR JESUS. SAVE YOUR SOUL. may be the only movie title ever comprised of two phrases, or in this case, two commands. All that aside, the film is essentially a parody about two evangelists who become hugely popular, rake in tons of money, and live lavishly in  a gigantic mansion. Their home also features a giant swimming pool, a closet full of designer clothes and shoes and a fleet of luxury cars.

However, Lee-Curtis Childs (Sterling K. Brown) is accused of sexual misconduct, which is not clearly defined in the movie, but it obviously affects his wife, Trinitie (Regina Hall). Nevertheless, it is enough to derail their lucrative enterprise, and HONK FOR JESUS. SAVE YOUR SOUL. is all about their desperate attempts to resurrect it.

Brown and Hall render superb portrayals in what is billed as a comedy, but it is their utter collapse as pastor and first lady, as their (former) parishioners call her, that is really quite pathetic. The Childs also hire a photo crew to document their every move, something they regret more than they suspected.

Many of the comic moments in the all-Black cast stem from a competing couple, Keon and Shakura Sumpter, played by Conphidance and Nicole Beharie, who are starting a new church of their own. The battle for congregants is on!

Despite settlements made to the offended parties, one of whom is a young man named Khalil (Austin Crute), the Childs are not faring well in terms of getting back their flock. Trinitie works very hard, holding up a home-made sign for motorists to “Honk for Jesus”, but she mainly ends up exchanging profanities on the side of the road with a pissed-off mother holding a baby.

Lee-Curtis is a master orator whose attire is far from “quiet”, but his audiences adore him, or at least they used to. And they also greatly admire their beautiful first lady with a smile that could melt any heart.

I found HONK FOR JESUS. SAVE YOUR SOUL. strangely compelling, primarily because of the stand-out performances of the two stars. First-time feature director Adamma Ebo also wrote the screenplay, and it perfectly captures the frustration and desperation of this couple to return to their previous privileged life.

However, that is more easily said than done. Public perception of celebrity figures is not easily changed for good reason. Just ask Harvey Weinstein, Matt Lauer, Kevin Spacey or especially Bill Cosby. These are all the names that came to mind watching HONK FOR JESUS. SAVE YOUR SOUL.