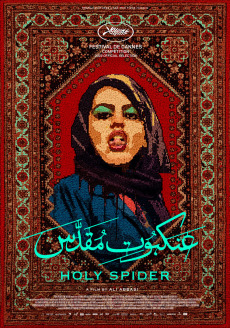 When one thinks of a country where sex workers are fairly common, Iran does not immediately come to mind. But in writer/director Ali Abbasi’s new film, HOLY SPIDER, Iran’s “spiritual capitol” Mashhad is the place where a serial killer had murdered 16 female prostitutes between 2000 and 2001.

Based on the true story of Saeed Hanaei, known as the “Spider Killer”, Abassi has written a riveting screenplay about this deranged family man whom many considered a hero for his commitment to ridding the streets of Mashhad of these “dirty” women. Portrayed by stage and screen actor, Mehdi Bajestani, Saeed believed he was doing God’s work.

Iran has a history of deep-rooted misogyny which is more cultural than political or even religious. This hatred of women is evident in the treatment of Rahimi (Zar Amir Ebrahimi), a female journalist who travels to Mashhad to report on the story of this heinous murderer. She is harassed by almost everyone she meets, including the front desk clerk at the hotel where she has a room reservation.

He doesn’t want to give her the room because she’s a woman travelling alone. It isn’t until she produces evidence that she is, in fact, a journalist that she is finally given a key. The local police inspector is equally dismissive, going so far as threatening Rahimi when she refuses his advances.

It becomes abundantly clear in short order to Rahimi that the police are doing little if nothing to actually capture this killer. They know where he trolls for prostitutes and that he rides a motorbike, but there is no surveillance set up to catch Saeed. Out of sheer frustration, Rahimi makes herself up to look like a sex worker and stations herself in his known prowling grounds.

After a couple of nights of no luck, Rahimi is approached by Saeed and goes with him on the back of his motorbike. His wife and children are out of the house and, oddly enough, he chooses to strangle most of his victims in his own home. A fellow colleague follows Rahimi and Saeed in a car but loses them as Saeed winds his way through a myriad of dark alleys. Rahimi has a knife, but will she be able to defend herself?

Abassi’s intention was “to make a movie about a serial killer society”, not just a film about a serial killer. It’s mind boggling to watch as Iranians cheer and support Saeed. Even his own family doesn’t think he’s done anything wrong. His pre-teen son wants to carry on his father’s mission of ridding Mashhad of these unclean women.

In his screenplay Abassi touches upon several of the victims and their miserable lives. It’s obvious these women do what they do because they have no other way of providing themselves. One of the young prostitutes has a little girl she must support. But of course, Saeed and people who think like him don’t stop to consider what these poor women must go through. Their hatred is palpable --- and yet it’s a busy trade that the police ignore.

HOLY SPIDER is graphic in its depiction of the murders. Bajestani is sufficiently creepy --- and self-righteous --- in his portrayal of Saeed who served his country in the military and now believes he’s on a mission for Allah. Bajestani lends Saeed his charisma, making it just believable that women would go with him and feel safe even though they know there’s a serial killer after all prostitutes.

Ebrahimi is superb. She presents Rahimi as a confident female in this bizarre atmosphere of hatred and resentment. But there are moments of sheer terror and Ebrahimi makes the audience experience each and every one of them. She’s subtly dynamic.

HOLY SPIDER is Abassi’s masterful expose of the hatred and misogyny aimed at women by men. It’s a cautionary tale for all females and demands to be seen.

A deeply religious man murders 16 women, admits his role in the killings, and declines to establish an insanity defense. Yet large segments of his country’s citizenry and the conservative media are vociferous about supporting him.

This scenario actually occurred in Iran between 2000 and 2001. The true story is the subject of a film entitled HOLY SPIDER, co-written and directed by Ali Abbasi who initially felt sympathy for the serial killer named Saeed Hanaei.

Saeed believed he was on a mission from God (or Allah), and that it was his duty to cleanse his country of “dirty” prostitutes. Iranian stage and film star Mehdi Bajestani portrays Saeed, a married man with two children. It’s a compelling performance in a movie that had us on the edge of our seats. That’s not to say HOLY SPIDER is not flawed because there are sequences that are questionable. But overall, it is quite suspenseful and very well acted.

Abbasi, however, did not want to merely make a film about a serial killer and the usual trappings that accompany that theme --- such as a smart detective and a savvy journalist who uncover clues about the assailant. He wanted to create a film that displays the misogyny of Iran and its deep-rooted hatred of women. To that end, he hired actress Zar Amir Ebrahimi --- she won the Best Actress Award at Cannes for HOLY SPIDER --- to play Rahimi, a female journalist who takes it upon herself to investigate the killings, talk to victims’ family members and possibly put herself in the “line of fire”.

The director also notes that Bajestani has risked his illustrious career by playing Saeed, comparing his actor to a Hollywood star playing a pedophile. As for Ebrahimi, she now lives in Paris having been blackballed in Iran due to a leak of personal, intimate tapes.

What I like about this film is the fact that the audience knows early on the identity of the killer unlike other screenplays that might reveal the felon only at the end. Thus, HOLY SPIDER becomes a film about the actions of Saeed and his subsequent trial. These are both engrossing aspects of the movie. As Saeed plays with his young daughter in the very home where he lures his victims, the contrast in his behavior is stunning.

The director wanted to make a statement about the dehumanizing of women in Iran whom he calls “non-existent figures with faces buried in cloth”. Ironically prostitution is rampant in Iran because it is viewed as an economic asset and the police look the other way. He also wanted the families of the victims to reflect on their murdered loved ones as human beings and not just numbers which people have forgotten about.

The movie takes place in Mashhad, Iran’s second largest city by population and its conservative religious center. But Abbasi was not allowed to film in Iran --- he took his cast and crew to Amman, Jordan for that. Because the production of HOLY SPIDER is primarily Danish, where Abbasi now resides, the film has been submitted by Denmark for best international feature at the 2023 Oscars.