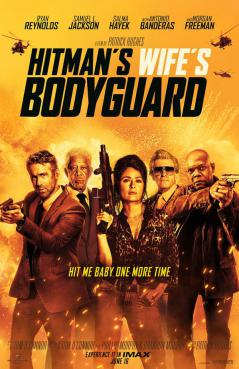 Michael Bryce (Ryan Reynolds) is in therapy after losing his AAA bodyguard rating. But even his therapist (Rebecca Front) is sick of him and convinces him all he needs is a little respite in Capri --- like the pants --- Italy to recover. Taking her advice, Bryce is relaxing by the pool with headphones when all hell breaks loose around him thanks to the international con artist --- and wife to Darius Kincaid (Samuel L. Jackson) --- Sonia Kincaid (Hayek). She has come to “convince” Bryce that he must help her rescue Darius, who has been taken by the mafia.

Is all this pretty stupid? Yes. But it does give the moviegoing audience another chance to experience the kinetic chemistry between Reynolds and Jackson with Hayek in the mix in a much bigger way. And I don’t care what snarky things my husband, David, will write, THE HITMAN’S WIFE’S BODYGUARD is very funny. I laughed OUT LOUD a lot. Unfortunately, I was about the only one laughing in our screening --- c’est dommage!

Perhaps there are a few too many car chases, lengthy gunfights and explosions, but the non-stop patter amongst these stars provides enough hilarity to assist in overlooking these minor flaws.

Hayek and Banderas go way back together, starring in Robert Rodriguez’s DESPERADO (one of my all-time favorites) and six other films. They are magical --- I could watch them in anything together --- and here as a homicidal wannabe mother and a Greek tycoon in a blonde pompadour, they are hysterical.

We already know how engaging Reynolds and Jackson are as the oddest of odd couples but adding Morgan Freeman to the cast makes it all just a little bit better. He possesses that certain gravitas that only he is capable of imparting.

There are many naysayers out there, including David. But, as I have written before, what does he know? He also, along with a multitude of other critics, didn’t like the first one, THE HITMAN’S BODYGUARD. But that film was #1 at the box office for three straight weeks and grossed over $180 million worldwide.

We can all use some mindless summer fun at the movies and THE HITMAN’S WIFE’S BODYGUARD fits the bill very nicely. It’s fast, it’s fun, and it’s wildly entertaining --- and it doesn’t overstay its welcome.

You know a movie’s in trouble when there are two possessive nouns in the title. THE HITMAN’S WIFE’S BODYGUARD is more of the same, essentially a replay of the first film from 2017, except this follow-up is 19 minutes shorter.

The big question to be answered: which is greater, the number of dead bodies or the number of F-bombs spewing from Sonia Kincaid’s (Salma Hayek) mouth? The second biggest query: with a cast that includes Ryan Reynolds, Samuel L. Jackson, Morgan Freeman, Antonio Banderas, Gary Oldman and Hayek, how could it fail? As Jeanne is prone to write, it’s all about the writing.

I realize that this sort of stuff is all tongue-in-cheek. But occasional, mildly amusing one-liners strewn in between countless deadly assaults by all manner of guns is not enough to save THE HITMAN’S WIFE’S BODYGUARD from being a crashing bore. Even if it had a decent storyline, it wouldn’t have been sufficient to maintain most moviegoers’ interest.

The first installment of what I hope doesn’t become a series featured director Patrick Hughes and writer Tom O’Connor. The duo returns here and because O’Connor penned the mostly solid script for the recent Benedict Cumberbatch spy film THE COURIER, there was hope that the second BODYGUARD movie would be a marked improvement over the first. It isn’t to be, even with, or perhaps because of, help from two other writers --- brothers Brandon and Phillip Murphy. Obviously, THE HITMAN’S WIFE’S BODYGUARD is intended as a dark comedy. But this film proves yet again that comedy is the most difficult of all cinematic genres to create effectively.

The movie has all the earmarks of a cast that had more fun making a film than those of us watching it. Although it has a relatively short running time of 99 minutes, it seems interminably long, and the final credits couldn’t come soon enough.

Having said all this, let me address the elephant in the room. Yes, Jeanne likes it. Of course, she’s entitled to her opinion. And that’s all I care to say about that.