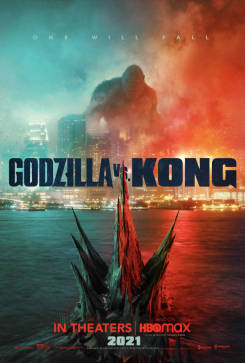 GODZILLA VS. KONG is rip-roaring, non-stop action --- for a total of 113 minutes. And David, who is normally so bored, didn’t fall asleep once --- amazing. If this genre of moviemaking is your thing, you will be overjoyed.

This fourth installment in Legendary’s MonsterVerse finds Kong still residing on Skull Island within a giant dome. Godzilla, unprovoked, attacks an Apex facility in Pensacola. In Hong Kong, Apex has created a mechanical version of Godzilla named Mechagodzilla, with all this leading, as one would expect, to a showdown between both Kong and Godzilla vs. Mechagodzilla.

The screenplay by Eric Pearson and Max Borenstein does include humans, especially one absolutely adorable little Iwi girl named Jia (Kaylee Hottle). She’s deaf, so she uses sign language to communicate with Kong --- and it’s so precious.

Demián Bichir, Julian Dennison, Shun Oguri and Kyle Chandler, but seriously GODZILLA VS. KONG is all about the Titans, as it should be.

The initial battles between Godzilla and Kong are high energy with spectacular special effects. The entire movie is one amazing- looking scene after another. When Godzilla attacks the flotilla carrying Kong chained to a barge and poor Kong ends up in the ocean, he comes up gagging and spitting out a lake-size amount of water --- incredible effects.

GODZILLA VS. KONG is simply great fun. And, as I mentioned, at 113 minutes it doesn’t overstay its welcome. If you are a fan, it’s a definite rush.

If you were curious, GODZILLA VS. KONG is the 12th film featuring the iconic ape. The 2021 version is a remake, of sorts, of KING KONG VS. GODZILLA (1962). For my money, the best of them all is KING KONG (2005) directed by Peter Jackson and starring Jack Black among others.

But GODZILLA VS. KONG is certainly entertaining. It’s under two hours and it’s not too violent for the kiddies despite its PG-13 rating. The visual effects are first rate, and the movie doesn’t take itself too seriously by injecting bits of humorous dialogue.

Director Adam Wingard and the slate of producers cast dependable actors like Alexander Skarsgård, Rebecca Hall, Millie Bobby Brown and Demián Bichir. However, the scene-stealing star of the film is easily Kaylee Hottle, a beautiful little Asian girl whom the gargantuan Kong considers a friend. She is also deaf in real life and in GODZILLA VS. KONG the giant ape has learned to sign with her character Jia however slightly. But it’s sufficient for him to communicate to her that he wants to go home after they leave Skull Island.

GODZILLA VS. KONG thankfully keeps its battle scenes relatively brief. One of Jeanne’s pet peeves is averted when Godzilla wastes no time when he devours --- in short order --- a few of his human adversaries. She detests when characters in films wait too long to take action against whomever they are fighting at the time, only to regret it later. And one of the lesser monsters in the film bears a striking resemblance to Mitch McConnell but the image is on screen for mere seconds, so watch closely.