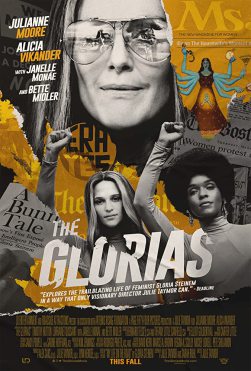 Julie Taymor’s THE GLORIAS is an extraordinary adaptation of Gloria Steinem’s autobiography “My Life on the Road”. It is so incredibly timely, as we are on the brink of having a female jurist possibly replace Ruth Bader Ginsburg --- one who isn’t fit to fill her seat. No matter what your personal assessment is of Ms. Steinem and her posse of brilliant, dedicated feminists, Taymor’ s use of historical footage to tell this amazing story is profound.

Steinem was born in Toledo, Ohio, the second daughter of a flimflam man, Leo Steinem (Timothy Hutton), who was married to the road, and a mother, Ruth (Enid Graham), who suffered from severe emotional and mental issues. Though her father was always looking for the fast buck and the family was constantly broke, little Gloria (Ryan Keira Armstrong) loved him dearly. He taught Gloria his love for the road and that “travel is the best education”.

Later, after having been abandoned by her father, 12-year-old Gloria (Lulu Wilson) was tasked with caring for her mother until her deteriorating mental health made that impossible. Ruth was committed to a home for women --- and Gloria was able to travel and pursue her dreams.

But what she wanted most at this point was to be a writer. Taymor covers her initial writing jobs, including the expose she wrote after going undercover as a Playboy bunny, up to her founding of “Ms. Magazine”. As her activism grows, she is influenced by so many other important feminists of the day, such as Dorothy Pitman Hughes (Janelle Monáe), Florynce “Flo” Kennedy (Lorraine Toussaint), Wilma Mankiller (Kimberly Guerrero), Dolores Huerta (Monica Sanchez) and Congresswoman Bella Abzug (Bette Midler), with whom she and others founded the National Women’s Political Caucus in 1971.

It is stunning to learn that Gloria was afraid of public speaking, as we consider the Gloria (Julianne Moore) of later years who spent the majority of her life in front of a microphone. Taymor and her crew had planned on ending the movie with Hillary Clinton’s election as President of the United States. When that failed to happen, they chose Gloria speaking at the WOMAN’S MARCH in January 2017, ending with her words “…and remember, the Constitution does not begin with ‘I the President’, it begins with ‘WE THE PEOPLE’”.

If you are a feminist --- which, by the way, is NOT a dirty word --- like me and millions of other women, THE GLORIAS is immensely moving --- and at times difficult to watch. I don’t believe there is any woman of a certain age --- or younger --- who hasn’t experienced sexual harassment. I know I have. So, watching Gloria deal with all of that brings back a lot of unwanted memories.

But Taymor doesn’t fixate on the negatives too much, thankfully. Although, there is one horrific scene where Moore’s Gloria is being interviewed by Larry King and a female caller from Cleveland, Ohio berates her for her feminist positions. As Moore’s face crumbles under the unwarranted attack, it brings into sharp focus the same cruelty of the present occupant of the White House --- and his supporters.

Initially Gloria Steinem herself was shocked that Taymor wanted to make her autobiography into a film. THE GLORIAS spans 80 years, and to connect all the content Taymor came up with the idea of a BUS OUT OF TIME, which takes the place of a “narrative voice over”. The concept is ingenious as we travel through Gloria’s incredible life, at times with one, two or even all four “Glorias” on the bus together.

All four actors portraying Ms. Steinem are exceptional, especially Moore who has perfected Gloria’s mannerisms. If just one of the four had been weak, it would have affected the outcome. But without the supporting cast of Toussaint, Monáe, Midler and Hutton, THE GLORIAS would not be nearly as entertaining. Each of these women --- and Hutton --- delivers a powerhouse performance. Bella Abzug was quite a character and Midler is one herself --- fabulous!

In all the present-day minutiae, and the divisiveness of the upcoming election --- and the Supreme Court nomination which could reverse

Roe v. Wade --- Gloria’s declaration about abortion says it all. It is “No one in their right mind is pro-abortion. No one gets up in the morning and says ‘Great, I’m going to have a procedure today’ --- it is a method of last resort.”

Despite the seriousness of equal rights, abortion rights and feminism, THE GLORIAS is a charming, funny, thoughtful, well-executed movie of a life well lived. And Ms. Steinem is happy with the production --- that’s all that really matters. The film can be seen exclusively on Prime Video on September 30th.

THE GLORIAS is an ambitious and wonderfully made movie that could not be more timely. It’s a story about women, by women and for everyone who believes in equal rights for women. We are treated to four stages in the life of Gloria Steinem, world famous proponent of civil rights for women everywhere. As portrayed by four gifted actors, none of these segments from THE GLORIAS as I describe them are necessarily depicted in chronological sequence.

As a young girl of seven, she is played by Ryan Keira Armstrong, growing up with her traveling con artist father, Leo (Academy Award winner Timothy Hutton) and sickly mother, Ruth (Enid Graham, quietly effective in her portrayal). Twelve-year-old Gloria is an idealistic young lady who dreams of living in Hollywood, getting married and having three kids. Lulu Wilson (HBO’s “Sharp Objects”) gets the nod here and she has an unmistakable screen presence.

But then the film goes deeper with Academy Award winner Alicia Vikander portraying Gloria as a struggling writer whose life is partly influenced by men who only see her, and women in general, as a sex object. We tend to forget that Steinem worked as a Playboy bunny as part of an undercover investigative report. That stint lasted all of 11 days.

Prior to her employ at Esquire Magazine, New York Magazine and others, Steinem is awarded a two-year fellowship to live in India where she witnesses first-hand the abuses heaped on lower caste women. Her experiences in India, as we see through the eyes of Vikander, were also instrumental in shaping her feminist viewpoints.

Vikander’s portrayal ultimately yields to the phenomenal Julianne Moore, yet another Academy Award winner in THE GLORIAS. She plays the older Gloria Steinem, still with the tinted, oversized glasses and attire some men would consider sexual in nature. In fact, one elongated sequence shows Gloria (initially with Vikander and then Moore) being interrogated on television and asked by the smug interviewer about her unmarried status and her choice of “provocative” clothes. This morphs into a fantasy segment reminiscent of the WIZARD OF OZ where said host is whisked into the sky, swirling in his chair like a male Wicked Witch of the West.

Despite a deep fear of public speaking, Moore’s Steinem proves to be a dynamic orator who galvanizes women all over the world to take action, assert their authority and further improve their lives. Her famous feminist publication “Ms. Magazine” was founded by Steinem in 1972 along with an equally driven group of women tired of kowtowing to male editors and publishers. The group included feminist activists like Flo Kennedy (Lorraine Toussaint) and Dorothy Pitman Hughes (Janelle Monáe). Their magazine was an instant success which is comically displayed in a bus scene with every female rider holding a copy.

Part of the beauty of THE GLORIAS is that we never lose sight of the four actors playing Steinem because they are constantly brought back into the story. At times all four appear together in black-and-white scenes that co-writer/director Julie Taymor fashions with her “Bus Out of Time”. Taymor is most known for her films FRIDA (2002) and ACROSS THE UNIVERSE (2007), along with her Broadway production of THE LION KING in 1997. The latter garnered her a Tony Award for Best Direction of a Musical, a first for a woman.

Each of the four actors has signature moments that are both entertaining and memorable. The littlest Gloria jitterbugs with her goofy-but-likeable dad in the middle of a rainstorm. Watching the sheer joy on young Armstrong’s face (and Hutton’s, as well) in this scene is a highlight. Then as 12-year-old Gloria, Wilson is terrific in a tap dance routine set in a Black barber shop.

Vikander has too-many-to-detail moments when she stands up to her male bosses in pursuit of her writing career. And Moore’s Gloria has a variety of significant sequences, none more so than her collaboration with Bella Abzug who would be elected to the U.S. House of Representatives. Abzug is played by the brilliantly cast Bette Midler. If anyone is deserving of a Supporting Actress nomination from Oscar in the year of Covid-19 it is Midler. A win there would give the “divine” Miss M membership in the ultra-exclusive EGOT club.

As I mentioned earlier, THE GLORIAS could not have come at a better time in our history as the country awaits the outcome of the presidential nominee to the Supreme Court. Just as the movie focuses on what may be considered Steinem’s signature cause, the future of reproductive rights for women could be altered for decades.

Gloria Steinem has accomplished so much in her lifetime. No portion of society has been immune to her dedication and passions, including the American Indian. Steinem inspires Wilma Mankiller, (Kimberly Guerrero),

Principal Chief of the Cherokee Nation, to speak up on behalf of her people.

The women’s ERA movement of the 60’s and 70’s, much of it spearheaded by Steinem, resulted in sweeping changes for women, most noticeably in this decade. And although the Equal Rights Amendment never passed through Congress, this remarkable progress is now threatened in the era of Trump. How, indeed, have we gotten to this point?

Taymor and her team, including co-writer Sarah Ruhl, splice in countless scenes of real footage from women’s marches and rallies. The result is that THE GLORIAS frequently plays like a documentary as a good biopic should. The director has hopes that those who see her film will be curious enough to investigate the lives of people like Bella Abzug, Flo Kennedy and Wilma Mankiller. She also hired her frequent collaborator, composer Elliot Goldenthal, to provide the score for her movie. Guess what? He is also an Academy Award winner.

Taymor closes her story with footage of a speech by the real Gloria at the historic Woman’s March on Washington in January 2017, just one day after the inauguration of our 45th president. She proclaims to her audience that the U.S. Constitution begins not with “I the President” but rather with “We the People”. In a word, THE GLORIAS is glorious.

THE GLORIAS is based on Steinem’s autobiography “My Life on the Road” (2015). The film can be seen exclusively on Prime Video on September 30th.