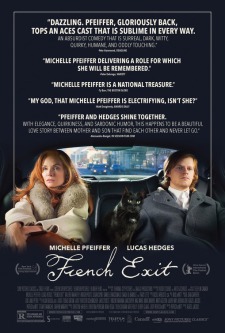 Sixty-year-old Manhattan socialite Frances Price, played by the ever-gorgeous Michelle Pfeiffer, had the same idea as I when she states

“My plan was to die before the money ran out.”. Based on Patrick deWitt’s dark comedy novel of the same name, FRENCH EXIT may not be to everyone’s liking, like David (who cares?), but I found it immensely entertaining.

Frances is broke. Franklin, her very wealthy husband, has been dead for 12 years and she has blown through all the money. So, she rescues her son, Malcolm (Lucas Hedges), from prep school and together with a cat named Small Frank they depart Manhattan for Paris at the behest of her friend, Joan (Susan Coyne), who happens to have a beautiful empty Parisian apartment just waiting for them.

DeWitt’s crafting of Frances is superb --- and Pfeiffer portrays her with aplomb. She is a hoot --- imperious and self-absorbed. When Franklin died, she left his corpse in bed and went skiing for a weekend. Obviously, he was still there when she returned, but no matter. And now that she’s in Paris, a new neighbor, Mme. Reynard (Valerie Mahaffey), also a widow, is obsessed with her. Not used to such naked adulation, Frances lets her guard down a little and soon she and Malcolm are spending much time with Mme. Reynard.

In fact, as weeks go by, their small group is joined by quite a few others, including a medium named Madeleine (Danielle Macdonald) whom Malcolm met on the cruise over. Convinced that Small Frank (voiced by Tracy Letts) is really the spirit of her dead husband Franklin, Frances prevails upon Madeleine to perform a séance.

In the meantime, their group has grown to include Joan, who shows up to check on Francis, Malcolm’s ex-fiancé, Susan (Imogen Poots) and her new boyfriend Tom (Daniel Di Tomasso). And Frances has taken to giving away the rest of the money she and Malcolm have left.

Directed by Azazel Jacobs, FRENCH EXIT has the feel of a Wes Anderson film. It’s zany and darkly humorous. Pfeiffer is so perfectly cast it’s almost eerie. She embodies Frances with a somber verve that is at once off-putting, and yet totally engaging.

She and Hedges developed a rapport that translates well to the screen. Malcolm is listless, without any direction, and as his mother continues to give their money away, it dawns upon him that he must make some changes. This is such a good role for him --- much like his character of Meryl Streep’s nephew in LET THEM ALL TALK.

The title FRENCH EXIT refers to the act of leaving a social gathering without saying goodbye to anyone. DeWitt, who also penned the screenplay, struggled with a title for his novel until a friend accused him of this faux pas. It’s actually quite fitting, something I must remember for my next act in Paris.

IN THEATERS IN LOS ANGELES AND NEW YORK ON FEBRUARY 12, 2021

If you’ve ever been to a social function and left without saying a word to anybody, you would have just completed a “French exit”. That’s the title of a whimsical, oddball, quirky film starring Michelle Pfeiffer and Lucas Hedges. They play Frances Price and her grown son Malcolm who leave their Manhattan apartment and move to Paris, bringing with them their cat named Small Frank.

The cat, they believe, is a reincarnation of Frances’ deceased husband Franklin who left them with a small fortune that is now almost gone. Even though Frances liquidates all her valuables --- jewels and artwork --- and reaps hefty piles of cash, she gives most of it away to a couple of ungrateful homeless men on the streets of Paris. So, you see FRENCH EXIT is not a particularly realistic story. That notion is reinforced when Frances seeks the help of Madeleine (Danielle Macdonald), a medium who has incidentally already slept with Malcolm, to reach out to Franklin in a séance. Actor/playwright Tracy Letts voices Small Frank.

I prefer a movie that actually has a direction and not a mishmash of events and relationships. FRENCH EXIT is not such a movie although there are some stand-alone moments that are entertaining thanks to an eclectic cast.

Pfeiffer is certainly up to the task of playing the once-wealthy socialite, a role she was “terrified” to play. Valerie Mahaffey stands out as Mme. Reynard, a woman desperate to find a friend.

As a whole, the film doesn’t add up to anything more than a self-indulgent rambling by two friends, a writer (Patrick deWitt) and a filmmaker (Azazel Jacobs), who collaborate on bringing the writer’s original novel to the big screen. What’s most impressive about the production is the cat (or cats) who play Small Frank. The filmmakers learned one important lesson while waiting for their cats to do something relevant to the script --- that it was best to give the feline actors some space and let them do their own thing. The result of that is purr-fection.

IN THEATERS IN LOS ANGELES AND NEW YORK ON FEBRUARY 12, 2021