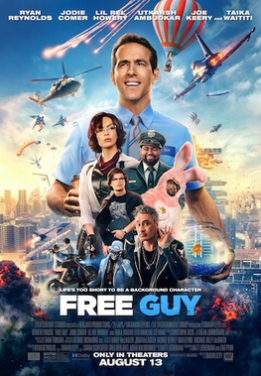 Can we all just agree that Ryan Reynolds is the most likeable actor working in films today? No matter what one may think of the premise of FREE GUY, directed by Shawn Levy with a screenplay by Matt Lieberman and Zak Penn, at least it’s not a sequel, prequel,

redo --- whatever. Instead it’s an original take on video gaming with a hilarious script.

Guy (Reynolds) is the most positive, nondescript bank teller ever. He awakes every morning with a cheery hello for his goldfish named --- wait for it --- Goldy. He has the same breakfast --- cereal --- and his closet is full of blue button-down, short-sleeved shirts and khakis.

He stops at the same coffee shop for the same order --- coffee, cream, two sugars --- before he plants himself at his teller station where he wishes everyone “not a good day, but a great day”. His best friend is Buddy (Lil Rel Howery), a security guard at the bank --- and every single day a gunman comes in to rob said bank. If it sounds a tad like GROUNDHOG DAY --- it is, for a while.

What Guy doesn’t realize is that he --- and all the other regular people --- are really background players or NPCs (non-playable characters) in an extremely violent video game called “Free City”. NPCs aren’t supposed to interact with the “sunglasses people” or the actual players, but Guy can’t help himself when he espies Molotovgirl (Jodie Comer), whose name is Millie in the real world.

Millie and her collaborator, Walter “Keys” McKeys (Joe Keery), had sold the game they designed to an obnoxious, villainous gaming tycoon, Antwan (Taika Waititi), who owns Soonami Studios, the distributor of “Free City”. Millie is convinced Antwan is using their codes for his game and prevails upon Keys, who works for Antwan, to help her prove her suspicions.

The fact that Guy is so kind and naïve is perfect for Reynolds, whose handsome countenance and constant cheerful demeanor can be counted on when playing such a loveable mensch. Even when Guy dons a pair of sunglasses which allows him to experience the magnitude of violence in “Free City”, he never loses his sunny disposition. Plus, Reynolds has spectacular comedic timing, so Guy is written with all this in mind.

FREE GUY does have a few moments when the story bogs down, but fortunately the overall end product is very entertaining. Comer is a terrific choice for Millie/Molotovgirl given her beauty and her vast experience portraying an assassin on “Killing Eve”. But even that role calls for a good sense of comedic timing when delivering Villanelle’s stinging one-liners.

Keery, one of my favorites from the Netflix series “Stranger Things”, is totally adorable in the role of Keys. When he talks about designing Molotovgirl with a certain someone in mind, he’s quite endearing --- love him.

And then there’s Waititi --- huge fan ---who just had a charming cameo in THE SUICIDE SQUAD. His penchant for being over-the-top doesn’t hurt him here. He makes a wonderful scoundrel who deserves everything he gets.

FREE GUY possesses all the right elements for a summer blockbuster. It’s sharply written vastly amusing, extremely colorful and imaginative. David even managed to stay awake. And if that’s not enough, there is a brief scene featuring Channing Tatum that alone is worth a venture to the local movie theater.

We first meet Guy (Ryan Reynolds) preparing to leave for his job as a big-city bank teller. He eats a bowl of cereal for breakfast before donning a blue shirt and khaki pants. Then it’s on to his favorite coffee shop where he places his order. Once settled at the bank, he chats with his best friend, Buddy (Lil Rel Howery), until there is a scary holdup. Buddy and Guy are quite nonchalant because they simply make small talk while prone on the floor until the heist is completed. So, what the heck is going on here?

After a few repetitions of the above scenario, we catch on that this is some sort of fantasy world akin to, perhaps, GROUNDHOG DAY. One bank customer always stands with his hands up in the air which will become important later. Guy is actually an NPC (non-playable character) in a video game called “Free City”. But he doesn’t yet know his status in the game.

FREE GUY is a unique, cinematic experience that will take audiences on a wild ride into the fantasy world of video games, out into the real world and back again. Non-gamers --- like Jeanne and me --- will not appreciate some of the idiosyncrasies the film has to offer, like cameos of well-known figures featured in actual video games. But video gamers should get a kick out of FREE GUY the rest of us can’t imagine.

That doesn’t mean we “nons” won’t be entertained. With a clever script from Zak Penn (READY PLAYER ONE, X-MEN franchise) and screenplay/story by Matt Lieberman (SCOOB!, THE ADDAMS FAMILY), plus direction by Shawn Levy (“Stranger Things”), this is a movie to savor as we embrace what is happening. Along with the immensely appealing Reynolds, FREE GUY features Jodie Comer (“Killing Eve”) in the dual roles of Millie and Molotovgirl, both in and out of “Free City”, and JOJO RABBIT’s Taika Waititi as crazed video game mogul Antwan in the real world.

Joe Keery (“Stranger Things”) stars as Walter “Keys” McKeys, a game programmer for Antwan’s Soonami Studios, and Utkarsh Ambudkar as Mouser, a coder for the same company. Keys and Millie actually created the codes that Antwan uses for “Free City”, but he gives them no credit or monetary reward, setting up the film’s confrontational finale.

But before we get there, Guy realizes that he deserves a bigger and better existence than just being himself, going through the same motions, day after day. When he falls for Molotovgirl and her striking biker apparel, his confidence soars and he is obsessed with the idea of improving not only himself but everyone around him. Thus, we have the tagline of the film: “Life’s too short to be a background character”.

FREE GUY is replete with Oscar-worthy visual effects, including placing Reynold’s head on world-class body-builder Aaron W. Reed’s heavily muscled physique. The pounding musical score from Christophe Beck complements the movie’s many surprises, not the least of which are cameos from the likes of Chris Evans --- for all of three seconds --- and a hilarious longer turn from Channing Tatum.

The standout performances from Reynolds and Comer certainly propel this film, but smaller touches abound. One example, from time to time we get a glimpse of real-world gamers staring madly into their consoles as they fret about “blue shirt guy” --- who has morphed into a star in “Free City” --- becoming extinct. And parents should be warned there is excessive violence --- albeit in a video game context. But first and foremost, FREE GUY is exceptionally entertaining, provocative and funny. And it definitely merits a second viewing.