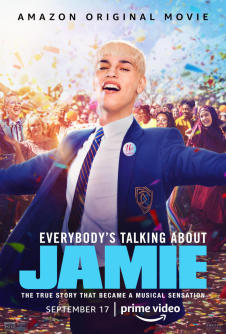 The amount of talent in EVERYBODY’S TALKING ABOUT JAMIE is astounding. You have a bunch of newbies surrounded by some pretty impressive veterans --- and it all makes for a rather joyful musical with a lot of heart.

Adapted from a London West End award-winning musical, which was based on a 2011 English television documentary about an openly gay 16-year-old named Jamie Campbell and his mother, Margaret, EVERYBODY’S TALKING ABOUT JAMIE features a fantastic newcomer, Max Harwood, as the irrepressible Jamie. BAFTA award-winning actress, Sarah Lancashire, plays his ever-supportive mum, Margaret, in a quietly amazing performance.

Jamie is in the last days of high school. His career advisor, Miss Hedge (Sharon Horgan), has been querying each of his classmates about their plans following graduation. Jamie’s best friend, Pritti (Lauren Patel, another debut performance), a Muslim teenager, has her sights set on being a doctor. But all Jamie can dream about is becoming a famous drag queen. Margaret has even purchased a pair of ruby red shoes --- a la Dorothy’s red slippers from THE WIZARD OF OZ ---but with six-inch heels.

He is so determined to follow this path, that he plans on attending their prom in drag. In his zeal to find just the right dress, Jamie happens into a shop owned by Hugo Battersby (Richard E. Grant), who was once the very popular drag star, Miss Loco Chanelle, in the 80s. Hugo takes Jamie under his wing and together they transform this very driven 16-year-old into an overnight sensation.

As I stated, EVERYBODY’S TALKING ABOUT JAMIE boasts a number of firsts, including the director, Jonathan Butterell, and screenwriter/lyricist Tom MacRae, both of whom had worked in theater but not movies. But what they may lack in filmmaking experience, they have made up for with enthusiasm for their work and the accomplishments of first-time film composer, Dan Gillespie Sells.

Following a lengthy search --- over seven months --- Harwood was cast as Jamie. Finding someone who could sing, dance and act, plus personify Jamie’s character traits was not an easy task. But Harwood took up the mantle as if he were born to play this role. He’s absolutely delightful, and incredibly gorgeous all dressed up in drag. He interacts with his supporting cast amazingly well, especially Patel. Their chemistry is totally engaging --- and so sweet.

Grant, at the age of 62, had never portrayed a drag queen before, but he did not let that challenge stop him. He makes Miss Loco Chanelle the perfect mentor for Jamie, while also reminding us of the horrors of the AIDS epidemic when the film flashes back to the 80s, while Grant sings “This Was Me”, an original musical number for the film by Sells. It’s a very powerful scene in EVERYBODY’S TALKING ABOUT JAMIE, and one that informs Jamie of the obstacles of those who came before him.

There aren’t a lot of options right now for an uplifting, basically happy movie. Sure, Jamie has some rather disappointing and sad experiences with his father, Wayne (Ralph Ineson) --- a real putz --- and the school bully, Dean (Samuel Bottomley), but overall the tenor of EVERYBODY’S TALKING ABOUT JAMIE is enchanting, encouraging and inspiring.