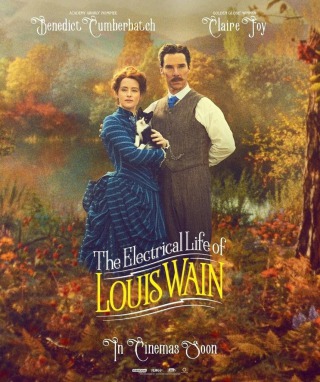 Narrated by Olivia Colman, THE ELECTRICAL LIFE OF LOUIS WAIN brings forth the real-life dramedy of Louis Wain, the immensely talented British artist born in 1860, known for changing the world’s perception of cats. Played with unique and wonderful verve by the equally talented Benedict Cumberbatch, this enchanting biopic will make you fall in love with felines, if you aren’t already.

Wain was the only male in a household of five sisters and mother following the death of their father. The eldest sister, Caroline (Andrea Riseborough), rules the home and its finances. Although he’d much rather be at county fairs drawing animals, Wain realizes he must take on some of the responsibilities regarding money. He is hired by Sir William Ingram (Toby Jones), the editor of the “Illustrated London News” to provide amusement with his creative drawings.

Wain consents to a governess for the younger sisters and thus Emily Marie Richardson (Claire Foy) joins the household, a remarkable young woman with splendid ideas for educating the girls --- and a keen interest in the bachelor brother. Wain is as smitten with Emily, but a plan of marriage throws the entire neighborhood into a tizzy. Emily is way beneath Louis’ station, but thankfully they don’t let them stop them.

Following their nuptials, they move to Hampstead to pursue a more tranquil life. It is here that they discover a black-and-white kitten alone in their garden. They name him Peter and he becomes their pet. Up until now, cats were kept mainly for mice control --- no one had

considered them pets --- at least not openly. When Emily is diagnosed with breast cancer, it is Peter who soothes them both, and provides Louis with the inspiration for his life’s work.

Cumberbatch is incredibly well suited for the role of Louis Wain. He has played other eccentric characters before and excels at these performances. He is an artist himself, so he was able to learn many of Wain’s techniques, including sketching with both hands at once. Louis wasn’t just a bit over-the-top at times, he also suffered from mental illness, which was clearly exacerbated by all the profound losses he endured.

The multi-talented actor is brilliant at conveying Wain’s struggles with his mental health issues, but it’s Cumberbatch’s ability to demonstrate the depth of Wain’s love for Emily which makes THE ELECTRICAL LIFE OF LOUIS WAIN so engaging. Foy and Cumberbatch are exquisite and share a truly lovely chemistry beginning with the scene at the dinner table after their initial meeting. They can’t keep their eyes off one another, and it feels so very real.

The marvelous screenplay --- because it’s always about the writing --- was penned by Will Sharpe, who also directs, and Simon Stephenson, who is also responsible for the original story of THE ELECTRICAL LIFE OF LOUIS WAIN. Will’s brother, Arthur Sharpe, composed the unusual, but highly effective --- and quite memorable --- score.

If you are a cat lover, it is imperative that you watch THE ELECTRICAL LIFE OF LOUIS WAIN. Wain’s delightful, colorful, extraordinary artwork --- and not just of cats --- is worth seeing on the big screen.

Every now and then moviegoers are treated to biographical films about obscure individuals who have had immeasurable impacts on society. THE ELECTRICAL LIFE OF LOUIS WAIN is such a movie, and in the hands of the impeccable Benedict Cumberbatch, the real life of Louis Wain both flourishes and falters in the years 1883 through 1925.

We first meet Wain on a train seated next to a stranger (Adeel Akhtar) who notices the sketches Wain is drawing at an insanely rapid speed. The stranger asks Wain what it would cost to draw the Pomeranian on his lap to which Wain replies that it’s free and proceeds to capture the dog’s likeness in mere seconds. This is an important early scene because co-writer and director Will Sharpe weaves this chance meeting into the end of the story in a most meaningful way.

I believe THE ELECTRICAL LIFE OF LOUIS WAIN will have many film fans flocking to the internet to read up on Louis Wain. He was a prolific artist and had a keen interest in science, particularly in electricity. His name became universally known during his lifetime because he was noted for his varied portraits of cats. When his wife Emily (Claire Foy) is diagnosed with breast cancer they embrace a lost kitten, name him Peter, and the cat becomes a vital companion to both of them. Peter also triggers Louis’ obsession and great talent for drawing cats in all manner of situations.

Cumberbatch turns in yet another all-consuming performance from Wain’s early years to his time as an old man in a mental institution. He is an accomplished artist himself, so he labored to replicate Wain’s incredible ability to draw with both hands at the same time. Unfortunately, Wain was not a good businessman and failed to copyright his art.

As for Foy she matches Cumberbatch’s eminence with a marvelous turn of her own. The star of “The Crown” and Cumberbatch have immediate chemistry when she is hired as a governess to tend to his five younger sisters. Chief among them is the eldest, Caroline (Andrea Riseborough), who is portrayed as a mean-spirited thorn in Louis’ side.

The other cast standout is Toby Jones as Sir William Ingram, editor of the “Illustrated London News”, who gives Wain a major opportunity to draw illustrations for the publication. Jones is superb as Wain’s kind and generous boss and benefactor. It is one of Jones’ best portrayals in an illustrious career playing supporting characters.

Taika Waititi has a cameo, and Olivia Colman, who worked with Sharpe before, is the film’s narrator. The sometimes peculiar but effective music is handled by composer Arthur Sharpe, Will’s brother.

THE ELECTRICAL LIFE OF LOUIS WAIN packs a lot of emotional intensity into its 111 minutes and is one of the year’s best films to date. In fact, the movie is worth the time just to take in all Wain’s drawings and cat machinations. Author H. G. Wells is credited with this tongue-in-cheek comment in a radio broadcast: “He invented a cat style, a cat society, a whole cat world. English cats that do not look like Louis Wain cats are ashamed of themselves.”