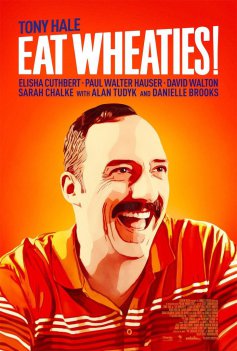 I have never been a fan of uncomfortable humor. And EAT WHEATIES! is definitely “uncomfortable”. Scott Abramovitch, who writes and directs, has updated Michael Kun’s 2003 novel “The Locklear Letters” for the era of social media.

Tony Hale stars as Sid Straw, a relatively content man who has worked for the same company for 14 years. He’s not popular at work, even though he tries very hard to be a people pleaser. Women keep blowing him off after one or two dates. He hangs out at the same steakhouse where his favorite waitress, Wendy (Danielle Brooks), always has his preferred “virgin” cocktail waiting.

When he snags the job as co-chair of the reunion for his class at the University of Pennsylvania, and remembers that Elizabeth Banks was an acquaintance on campus, he becomes obsessed with trying to connect with her --- and telling everyone they were once friends. He even signs up on Facebook --- something he’s never done before --- in an effort to rekindle their “friendship”. Elizabeth had a favorite departing retort in those days --- “Eat Wheaties” --- that Sid uses to sign all his Facebook posts to her.

Unfortunately, with most things in his life, Sid overdoes his overtures to the point where Ms. Banks’ agent, Frankie Riceborough (Sarah Chalke), petitions for a Temporary Restraining Order. This along with his overly creepy and numerous Facebook posts causes Sid to lose his job, his apartment and most importantly his position as co-chair for his college reunion.

I did not laugh once --- not at all --- nada. In fact, I found this story depressing and ludicrous. The only people who are kind to poor Sid are Wendy and his brother, Tom (David Walton). Tom’s wife, Janet (Elisha Cuthbert), is a total bitch, blaming Sid for ruining their wedding. Again, not funny.

Paul Walter Hauser plays James Fisk, an online law school grad who isn’t a real lawyer. Sid helps James and his wife, Carla (Sugar Lyn Beard), watch their children --- among other things --- so James can pass the bar and represent Sid in his effort to get the restraining order revoked --- all in time for the reunion. I wish I could write that some of this is at least a tad bit humorous, but no.

The frustrating aspect of EAT WHEATIES! isn’t the celebrity worship that I believe we are intended to buy into. Sid firmly believes that he and Elizabeth were friends --- and I do buy that. He’s fleshed out as such a pathetic character, which bothers me immensely. Is it not possible for someone to simply be a nice person without everyone making him into a cliché?

Abramovitch’s script leaves much to be desired, forget the fact that it just isn’t funny. We can see all of Sid’s repercussions coming --- and the subplot of Fisk as the bumbling attorney has been done so many times before --- and with much greater success. It is retread material and utterly annoying.

The ending of EAT WHEATIES! is the only saving grace. Tom and Janet have their baby --- Janet is not nearly as mean --- even asking Sid to be the godfather. Wendy and Sid look like they might end up together. And oh --- wait for it --- all of Sid’s messages finally reach Elizabeth and she’s thrilled to hear from him. Please shoot me ---

There are a couple of reasons to watch EAT WHEATIES! All the way to the end --- but just barely. One is to see if the nebbish protagonist, Sid Straw (Tony Hale), actually makes it to the college reunion he once co-chaired, and two is to see if actress Elizabeth Banks shows up at any point in time.

EAT WHEATIES! isn’t an awful film, it just suffers from a dearth of laughs. The cast is made up of some veteran actors noted mostly for  television roles, names --- along with Hale --- like Elisha Cuthbert, Alan Tudyk and Sarah Chalke. They do what they can with the script by writer/producer/first-time director Scott Abramovitch based on the book “The Locklear Letters” by Michael Kun.

The standout performance for me is Paul Walter Hauser, so good in Clint Eastwood’s RICHARD JEWELL (2019), here portraying blundering attorney James Fisk who manages to successfully represent his client, Sid Straw. Hauser is well suited to play the underdog that audiences want to root for and his daffy wife, Carla (Sugar Lyn Beard), adds a measure of fun to the ludicrous environment (he interviews clients at a desk in his living room adjacent to Carla and their kids). Three other small but solid performances come from Danielle Brooks, who plays Wendy, a caring waitress at the restaurant where Sid is a regular, Gita Reddy, the judge in Sid’s case, and Lamorne Morris as a co-worker.

Hale plays the put-upon loner well enough. His character is so inept at social media, i.e., Facebook, that he is served with a TRO (Temporary Restraining Order) because Elizabeth Banks’ agent played by Chalke

considers him a stalker. The storyline about constantly texting Banks for an autographed picture, imploring her to be at their University of Pennsylvania reunion, etc., and signing off every communique with “Eat Wheaties” can only stretch so far.

One flaw in the writing has the recently fired Sid accepting a VP of Sales & Marketing position only to lose it when the hiring company learns of his TRO. He interviews several attorneys to clear the slate for him, but he can’t afford their hourly rate. That’s how he ends up with Fisk. In reality, he probably could have borrowed the money from his parents. This is the type of script that makes Jeanne cringe because people are so inept or behave in an inane manner. Bottom line: EAT WHEATIES! is amiable enough to catch at home --- but that’s it.