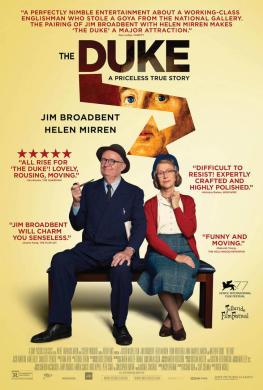 THE DUKE is everything one would hope for in true British fare based on a very real theft never before told. In 1961, Kempton Bunton (played marvelously by Jim Broadbent), a mostly unemployed 60-year-old, steals Francisco Goya’s portrait of The Duke of Wellington from the National Gallery in London. It was the first --- and the last --- painting ever to be pinched in the Gallery’s 196-year history.

Kempton is a dreamer. He writes plays which never get published. But he’s also a humanitarian. He believes firmly in helping others and standing up for peoples’ rights. He and his long-suffering wife, Dorothy (as always, the formidable Helen Mirren), who works as a cleaner for Mrs. Gowling (Anna Maxwell Martin), the wife of a local Councillor, had lost their oldest child, a daughter Marian who was 18, a few years earlier. Unable to process her grief, Dorothy will not talk about Marian, which leaves Kempton to visit her grave alone.

One of Kempton’s crusades involves petitioning for free TV licensing for veterans and the elderly. He removes the BBC component from his own television, so he doesn’t have to pay, but ends up spending 13 days in jail. After the painting by Goya is purchased by the British government for 140,000 pounds, Kempton becomes particularly galled because he feels that hefty sum could have been used for free TV.

He makes a plan to steal the painting and hold it for ransom to encourage the government to see the error of its ways. When his older son, Kenny’s (Jack Bandeira), girlfriend, Pamela (Charlotte Spencer), finds the work of art in the back of the upstairs wardrobe, where Kempton and his younger son, Jackie (Fionn Whitehead) had hidden it, she wants to turn it in for the reward. Instead, Kempton returns the painting to the Gallery himself, and is arrested for the crime.

His trial at the Old Bailey --- the number one criminal court in England --- becomes a major event. His barrister is none other than Jeremy Hutchinson QC (Matthew Goode), well known for many famous cases, who thought it would be amusing to defend Kempton.

None of his family attends --- Dorothy is still much aggrieved --- but her employer, Mrs. Gowling, is there in support. Kempton’s defense of his principles and wicked sense of humor wins over everyone in the courtroom. That, combined with Hutchinson’s clever arguments, produces a rather surprising outcome.

THE DUKE is precisely what the world needs right now. In this era of supreme divisiveness, screenwriters Richard Bean and Clive Coleman have given us someone to admire and cheer for. Kempton Bunton lived by his convictions and was dedicated to helping those less fortunate, even though he and his family barely scraped by. In the year 2000, free television licenses were finally provided for those over the age of seventy-five.

What transcends this amazing story which has never been fully told before are the performances of the incomparable Jim Broadbent and Helen Mirren. Both are national treasures in the UK, and no one could portray these two characters better.

Broadbent even resembles Kempton. He embodies the genuine spirit of this local hero with just the right amount of believability and humor --- never making him someone to resent or pity. And Mirren is simply extraordinary. She was eager to take on the role of Dorothy despite the less-than-glamorous visage of a cleaner, and --- per usual --- she nails it.

The always reliable --- and ever adorable --- Goode is absolutely perfect as the barrister who does his best to provide a winning defense. The entire cast is excellent, managed beautifully by the late director Roger Michell.

THE DUKE is the quintessential British movie --- charming, hilarious and informative. It’s wonderfully entertaining for the entire family, except for one teeny suggestive scene, but no matter, it will go right over the kiddies’ heads. And at 96 minutes, it’s the ideal length.

THE DUKE is a small gem of a movie that was filmed in 2020 and released in the U.K. on a delayed basis in February 2022. Its most recent release was in New York and Los Angeles on April 22nd. It is now coming to select American venues as part of an initiative by Sony Pictures Classics to get people back into movie theaters. (information for LA sites at the bottom of our reviews).

With old pros Jim Broadbent and Helen Mirren heading the cast, along with a smart screenplay, this story --- based on a real event --- fits deservedly into the “feel good” genre. It also features one of Jeanne’s all-time favorites, Matthew Goode, as defense attorney Jeremy Hutchinson QC, sympathetic to Broadbent’s character, Kempton Bunton. Mirren plays Bunton’s intolerant wife Dorothy, and their youngest son is played by Fionn Whitehead.

In 1961, taxi driver Bunton is accused of stealing a priceless painting from London’s National Gallery. Goya’s portrait of The Duke of Wellington was then valued at 140,000 pounds, equivalent to about $2.2 million dollars today. Bunton’s defense is that no crime was committed because it was, among other things, stolen for altruistic reasons. Goode’s closing summary is pure gold.

THE DUKE has us believing one thing and then pulling a complete 180 on the viewer late in the film. Meanwhile, Broadbent delivers one-liners that delight almost everyone, including the court gallery and even the Clerk of the Courts (Heather Craney) who spends the entire trial with a gleeful smirk on her face. The judge, however, who is clearly annoyed by the proceedings, is played to perfection by James Wilby.

Dorothy and Kempton lost their 18-year-old daughter some 13 years earlier in a bicycle accident which she refuses to talk about, and he bears the brunt of her unspoken grief. However, the truth about the painting’s theft ultimately brings the old married pair closer together.

Director Roger Michell, known for NOTTING HILL (1999) and MY COUSIN RACHEL (2017), passed away this past September, so the wide release of his film is bitter-sweet. Writers Richard Bean and Clive Coleman keep the dialogue flowing in a most entertaining way. And editing by Bafta winner Kristina Hetherington is superb as her work captures perfectly all the reactions to Kempton’s zingers.