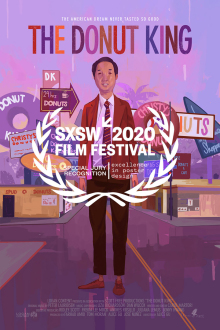 The writer, director --- and the director of photography --- of the documentary THE DONUT KING is Alice Gu, a native of Los Angeles who is the daughter of Chinese immigrants. Growing up she would hear about

“Cambodian donuts” from her nanny and was curious why she called them that. Alice, like just about everyone else, thought donuts were simply an American obsession --- made by Americans --- until she did some research and discovered Ted Ngoy, aka The Donut King.

In 1975, Ted arrived at Camp Pendleton in Southern California as a refugee from Cambodia. He and his family had escaped genocide at the hands of the Khmer Rouge. He was determined to achieve the “American Dream” and began working several jobs, one of them being a donut maker at Winchell’s. He worked extremely long hours, scraped and saved to buy his own shop. Within three years he and his wife, who was always by his side in his shops, were millionaires, moving into a large house with a pool and a boat.

But Ted’s story doesn’t end there. He became hooked on gambling, lost all his money --- and his many donut shops --- along with his faithful wife. A

“little” affair was the last straw, so she divorced Ted and he moved back to Cambodia.

THE DONUT KING isn’t only about Ted, though. When he was at his most successful, he sponsored hundreds of refugees, teaching many of them the donut business. Presently, there are estimated to be 5000 independent donut shops in California and 80% of them are owned by Cambodians.

Gu follows several families, all originally helped by Ted, as she documents their trials and successes in the donut business. The workdays are long and arduous, but these families remain close knit --- and every member pitches in, even if they wish to pursue other dreams.

THE DONUT KING also points out the current failures on immigration by the Trump administration. In the 1970s, according to a military historian quoted in her film, “The whole world was watching.”. Jimmy Carter was instrumental in bringing many Cambodians, including Ted, to the United States. Now, with our anti-immigrant stance --- and the impact of Covid-19 --- refugees looking for security and a new place to begin again are no longer wanted within our borders.

Though I applaud Gu’s efforts to bring the plight of hundreds of thousands of misplaced people to light, I am less pleased by the admiration shown to Ted. Here was a man who had worked so incredibly hard and then fell victim to the flashy trappings of wealth. Not only did he ruin his life, but he also ruined his family’s. And when he returns for a visit to LA, he is welcomed as a hero. I found that aspect of THE DONUT KING repulsive.

I also find it ironic that Ted was brought to the U.S. by a Democrat, and once he made his millions, he becomes a Republican, backing Ronald Reagan. Aren’t you supposed to be faithful to the one who “brung ya to the dance?”.

THE DONUT KING is Gu’s directorial debut. Her desire to create a documentary illuminating the struggles of immigrants is evidenced by her intelligent screenplay. Her research is meticulous and the stories she imparts are well worth the audience’s time. She has accomplished a

much-needed service by re-introducing a new generation to the dire straits of people who need America the most.

If you live in Los Angeles you probably have noticed an inordinate number of donut shops --- practically on every block. Okay, that’s an exaggeration, but the new documentary THE DONUT KING follows the career of Ted Ngoy, a Cambodian refugee who escaped the Khmer Rouge and came to the U.S. with little money in 1975. Within three years he built a multi-million-dollar donut empire.

It is estimated that there is one donut shop for every 7000 citizens in California. This works out to over 5000 donut establishments, the vast majority (80%) Cambodian-owned. The roots of this achievement are largely thanks to Ngoy’s ability --- he sponsored hundreds of visas for refugees --- and willingness to help his fellow countrymen thrive in America. Ngoy himself owned some 65 shops up and down California.

At one point the film discusses the incursion of Dunkin’ Donuts which threatened to usurp the independent donut shop owners. But the loyal customers of the ‘Mom & Pop’ operations prevented that from happening, even standing in long lines to buy their scrumptious treats.

The film has interesting footage of the making of donuts, plus stats on how many donuts the average American eats. It also includes extensive interviews with Ngoy’s family and associates. We get a peek at the $2 million home Ngoy purchased, a stark opposite to the hovel in Cambodia where he was a child. He seemingly had it made, but there is a dark side to his story.

This shifts the viewer to Las Vegas where Ngoy spends much of his time in the casinos. What ensues is a sad turn of events and defines how anyone can fall from grace.

Alice Gu, THE DONUT KING writer/director and a native of LA, captured the Special Jury Award at the prestigious SXSW Film Festival 2020 for Best Documentary, as well as awards at lesser-known festivals. This movie is her feature-length debut as a director. Gu’s career to this point has been as a cinematographer primarily working on docs. Of note --- Ridley Scott is an executive producer of THE DONUT KING.