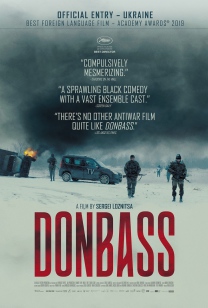 Ukrainian filmmaker Sergei Loznitsa’s fourth feature, DONBASS, was filmed in 2018. The Donbass is a region of Eastern Ukraine where fighting between Russian and Ukrainian forces has been ongoing since 2014. Billed as a satirical black comedy, the fear, hatred and degradation of the inhabitants of this region is prescient of what the entire country of Ukraine is currently experiencing.

The movie, which feels more like a documentary, begins in a trailer used for hair and makeup. The “actors” are being readied for a propaganda scene which is filmed at the sight of a bombed city bus. This is the first of 13 episodes which comprise DONBASS.

War is horrific. And that is never clearer than what is happening in the Donbass. Tensions run high as people are forced to navigate the horrors all around them. Fake news, deception and violence is rampant especially when the separatist gangs take to the streets committing robberies and killings.

The stories told in DONBASS are based on real events which happened in the occupied territories between 2014-2015. Loznitsa’s screenplay transports the audience from the absurd to the terrifying realities of war in the present day.

Men are ordered off a bus and told to strip to their waists, while being berated for not serving in the army. Families take refuge in ancient underground bomb shelters with no heat, running water or a working toilet. They are damp and cold, surrounded by mold, toxins and vermin. An older couple shows up drunk to their wedding ceremony attended by the unsavory characters who just tortured a Ukrainian volunteer soldier tied to a pole a few miles down the road.

The Donbass is an industrial region populated by descendants of the prisoners, courtesy of the GULAG which provided free labor. It has been besieged by gangs and Russians who want to restore the ways of the USSR. Thus, the continued conflicts and now it is viewed as the area where Putin can gain a stronghold.

At one point in the film, a woman on a bus tells her seatmate she is returning to her home unaware of what she may find. She expects it has been bombed, but she is going back regardless. It’s an eerie and frightening foreshadowing of what many Ukrainians are facing right now.

And lest anyone watching DONBASS thinks for even a moment that was isn’t random and terrifying, the final scene back in the makeup trailer takes care of that.

DONBASS is a 2018 film made by Ukrainian director Sergei Loznitsa and released overseas. But it is  now available in the U.S. The Donbass is a region in Eastern Ukraine made up of many small towns, but there is an amazing irony with the American release of DONBASS.

The current invasion/war perpetrated by Putin and the Russians on Ukraine is entering its second phase, and Russian troops are now targeting the Donbass for victory and occupation. While DONBASS could not have predicted what would happen in 2022, the movie is based on actual events from 2014-2015.

The film is made up of 13 vignettes or episodes, some dramatic, some farcical. One dramatic episode features a number of Ukrainian civilians holed up in a bomb shelter in deplorable conditions --- no heat or hot water, no working toilets, mold everywhere. One comedic vignette takes place at a wedding where the bride with bad makeup apparently does not want to be kissed by her prospective husband, while a crazed cheering throng of guests shouts its approval.

One scene has an older man, handcuffed, draped in a Ukrainian flag wearing a sign that reads “extermination volunteer”. He’s attacked by an angry mob who believes he’s a fascist. In fact, being labeled a fascist in this story is the worst possible charge one could face, a throwback to previous Russian fascist regimes.

Each episode opens with the overlay that we are looking at “Occupied Region in Eastern Ukraine --- in a small town”. Russian troops, heavily armed, impose their will on anyone they choose. One man shows up to reclaim his vehicle the Russians confiscated, apparently because of a false invitation to do so. He ends up forced to sign the release of his car to the Russians which he may get back at a later time --- for at least 100,000 (local currency) --- assuming he stays out of prison.

DONBASS must be seen to be believed. The large and talented cast is spellbinding, although it is not always clear who is on what side. What is clear is that the inhumane treatment of others is a violation of basic human rights, and it is impossible --- while watching Loznitsa’s film --- not to think about Putin’s current assault on the innocent people of Ukraine.