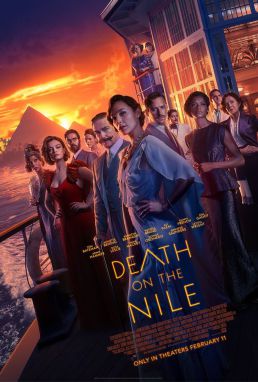 Looking positively debonair in his three-piece white suit with matching chapeau, Kenneth Branagh reprises the role of Hercule Poirot in DEATH ON THE NILE, which he directs. Based on the Agatha Christie novel she penned in 1937, Branagh adds a few background details of his own regarding the super sleuth and why he has that rather prominent moustache.

As screenwriter Michael Green tells it, Poirot was in love once. During World War I he saved his regiment with his powers of deduction but was injured in the process. His face was badly scarred, so his fiancé suggested that he grow a moustache to cover them. Then tragically she was killed by a bomb on her way to visit Poirot in the hospital. So now we know the origin of Poirot’s iconic facial hair --- and why he has never married.

But not to worry, there is another young couple very much in love. Multimillionaire and glamorous socialite, Linnet Ridgeway (Gal Gadot) is marrying the very handsome Simon Doyle (Armie Hammer) after stealing him away from her childhood friend, Jacqueline de Bellefort (Emma Mackey). Their destination is Egypt, where they board the S.S. Karnak, a riverboat on the Nile, to escape the ever-present Jacqueline who appears to be stalking them.

Along for the river cruise are the rest of their wedding guests; Bouc (Tom Bateman) and his mother, Euphemia (Annette Bening), Dr. Linus Windlesham (Russell Brand), Linnet’s ex-fiance, Marie van Schuyler (Jennifer Saunders), Linnet’s godmother, and her companion/nurse, Mrs. Bowers (Dawn French), Andrew Katchadourian (Ali Fazal), Linnet’s cousin and lawyer, Louise Bourget (Rose Leslie), her assistant, a star blues singer brought along to perform, Salome Otterbourne (Sophie Okonedo), with her niece/business manager, Rosalie (Letitia Wright) and Poirot, who is enticed onboard to watch over Linnet. When a murder occurs, it is up to Poirot to ferret out the culprit.

Following the box office success of MURDER ON THE ORIENT EXPRESS in 2017, it was determined that a sequel was in order with Branagh once again taking on the role of the Belgian detective --- and director. Green’s screenplay is fairly imaginative, allowing for a rather steamy dance sequence between Jacqueline and

Simon --- and then Simon with Linnet. They certainly knew how to party in the 30s.

The champaign flows freely on the S.S. Karnak, but poor Linnet wants only to return home. Simon’s assurances serve only to exacerbate her fears until finally he relents, and they plan their departure. Gadot and Hammer elicit believable chemistry, but not nearly as convincing as Mackey and Hammer. The two of them are downright sultry together --- but money does count for something, and the gorgeous Linnet has plenty.

The cast is formidable. Bening is sterling as Bouc’s suspicious mother, and Brand is almost unrecognizable as the jilted fiancé. Okonedo and Wright are changes to Christie’s original story with their presence adding to the delicious flavor of Green’s script.

DEATH ON THE NILE is not going to win any awards --- or possibly for the fabulous costumes by Paco Delgado. It’s worth seeing Branagh’s latest for the clothes and the spectacular 128.54 carat Fancy Yellow Tiffany Diamond (originally worn by Audrey Hepburn to promote BREAKFAST AT TIFFANY’S) given to Linnet by Simon. Wow! The music by Patrick Doyle sets the mood for this murder mystery thriller, one of Christie’s best.

Director and star Kenneth Branagh has again collaborated with writer Michael Green for DEATH ON THE NILE, the sequel to Branagh’s 2017 film MURDER ON THE ORIENT EXPRESS. DEATH ON THE NILE is the second movie version of Agatha Christie’s novel (following the 1978 star-studded picture), and while it is a sumptuous feast for the eyes, it doesn’t reveal much of anything new for veteran moviegoers.

Nonetheless, when do we ever see a cantankerous snake, a hungry alligator and a man flying a kite on the Egyptian pyramids? These are all sight gags thrown in by Branagh and they work briefly to capture our attention.

Younger cinephiles may be intrigued by the group of possible whodunits on the luxury cruiser Karnak (no sign of Ed McMahon or Johnny Carson) and the painstaking and endless interviews conducted by Belgian detective Hercule Poirot (Branagh). Frankly I found much of the proceedings a bit boring, but there’s no denying Christie’s wonderful sense of irony, preserved here by Branagh and Green in the film’s major twist.

Much more intriguing are the film’s two female stars, Gal Gadot as the wealthy Linnet Ridgeway and Emma Mackey as the seductive Jacqueline de Bellefont. Their friendship goes back to childhood until Linnet manages to snatch away Jacqueline’s fiance, Simon Doyle (Armie Hammer). Passenger Euphemia (Annette Bening) and her son Bouc (Tom Bateman), who is also a friend of Poirot, join an unrecognizable Russell Brand, Linnet’s former fiancé, plus Rose Leslie as the unfortunate Louise Bourget.

The unusual cinematography --- on two occasions the ship drops anchor, and we see it from the camera’s underwater vantage point --- plus the overall breathtaking vistas and creative costuming add to the fun. In fact, the movie opens with remarkable black & white scenes from World War I where Poirot as an infantryman saves nearly his entire regiment from certain death with his brilliant deductions. It proved to be a difficult task for the rest of Branagh’s film to sustain this level of excellence.

Branagh is his usual undeniable presence on screen as the world-famous detective solving murders that no one else seems able to figure out. But for all Branagh’s charm and style, British actor David Suchet will always be my front runner to portray Hercule Poirot. And he sports the better moustache.