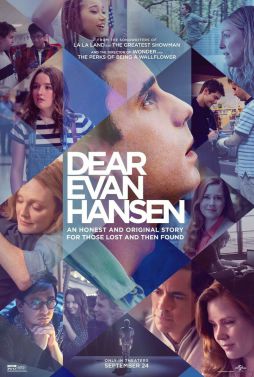 Full disclosure --- David and I have not seen the stage version of this wildly popular musical. But I am a firm believer in reviewing a film on its own merits, not based on how it compares to its original format.

That written, I must confess after the screening of DEAR EVAN HANSEN, I am puzzled by all the hoopla regarding the 2015 Tony winner. Ben Platt, who starred in the Broadway production, revives his role as Evan Hansen. It has been six years, obviously, and Platt has literally aged out of this role.

Hansen is supposedly a shy, nerdy teenager with no social skills --- and no friends. Platt plays him as if he were still on stage, and he definitely appears way older on film, no matter how much hair, makeup --- and wardrobe --- try to make him look younger. It is actually quite disconcerting.

Add to all that, Platt’s truly annoying tics, quirks and unsettling mannerisms, and DEAR EVAN HANSEN almost doesn’t stand a chance. The supporting cast is praiseworthy, especially Kaitlyn Devers as Zoe, the sister of Connor (Colton Ryan, also very effective in his brief part), the high school classmate who commits suicide. Evan has had a crush on Zoe for some time, so when an untruth becomes muddled --- and Evan lands in the middle --- he trades on his secrets to get closer to Zoe.

Dever has a lovely voice, as does Platt and the rest of the ensemble. But after 137 minutes, which is just way too long, every song began to sound the same. Steven Spielberg is bringing back WEST SIDE STORY later this year --- and trust me, not one of the songs in that production sounds like another. And earlier this year, Lin-Manuel Miranda gave us IN THE HEIGHTS --- a glorious musical filled with memorable tunes. And most recently, EVERYBODY’S TALKING ABOUT JAMIE is a marvelous example of a rousing musical with a message.

Granted, the subject matter of DEAR EVAN HANSEN, teen suicide, is very serious. The fact that significant attention is being focused on this tragedy is admirable. However, instead of exploring the roots of many of the issues facing young people today, DEAR EVAN HANSEN takes an easier path by glossing over the deeper, more pervasive problems.

Alas, DEAR EVAN HANSEN is not one to be recommended. Screenwriter Steven Levenson, who adapted from his own book, has penned a seriously manipulative movie, and director Stephen Chbosky doesn’t help by not curtailing some --- or all --- of Platt’s irritating movements. It’s a difficult, uncomfortable film to watch, so

Normally movie musicals are a form of cinema I really like to promote. In the case of the new film DEAR EVAN HANSEN, which is based on the Tony and Grammy award-winning Broadway play of the same name, I am somewhat ambivalent.

As you may know, Jeanne often talks about the importance of the writing in a film. For me, it’s all about stoking deep emotions --- yes even quietly sobbing, if only to oneself. Halfway through DEAR EVAN HANSEN I found a

tear --- or several --- streaming down my face due to a particularly poignant sequence involving Evan Hansen (Ben Platt) as he addresses his high school classmates.

The problem for me is too many musical interludes. Whenever the storyline got interesting, whether it’s Evan talking to his mother (Julianne Moore) or to his girlfriend Zoe (Kaitlyn Dever) or to the mother (Amy Adams in her best role in recent times) of the boy who commits suicide (Colton Ryan as Connor Murphy), the actors would break into song. I believe only one musical number stood out as unique --- during Evan’s speech --- so it seems that the mood the regular dialogue had created was broken time and again in order to infuse the requisite tunes. Director Stephen Chbosky may have felt indebted to the play in terms of replicating it in its entirety for the movies. The bottom line is that the film is too long --- 30-45 minutes could have been pared from the final cut.

However, DEAR EVAN HANSEN is still worth seeing. Platt recreates his lead role in the play for which he won a Tony, Emmy and Grammy. He’s obviously a fine singer and actor. We believe he suffers from severe social awkwardness and root for him to break that spell. Moore, Adams and Dever, plus Danny Pino as Connor’s stepfather, all turn in excellent work. Other cast standouts are Amandla Stenberg as Evan’s classmate Alana Beck who organizes a campaign to raise awareness of people with mental illness and Nik Dodani as his “family friend” Jared who supplies much of the comic relief.

The film does a superlative job displaying positive student reactions to Evan’s speech after it is posted on social media. Teens everywhere express their gratitude to Evan. The hordes of mostly younger kids whom Evan has apparently helped is quite inspiring. The high school years can be torturous, so DEAR EVAN HANSEN paints a hopeful picture for a lot of these teenagers who feel alone or unwanted.