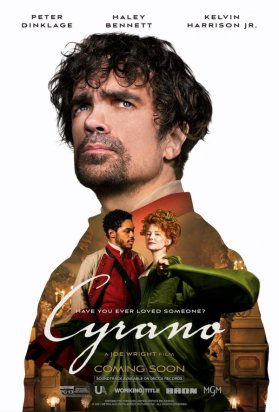 Director Joe Wright’s vision for the timeless tale of Cyrano de Bergerac, based on the play by Edmond Rostand, forgoes the very large proboscis of the title character. Instead, using the theater staging by Erica Schmidt, which incorporates music, CYRANO trades a prominent nose for a “unique physique”.

Peter Dinklage stars as the witty, articulate and highly poetic Cyrano, whose love for the beautiful Roxanne (Haley Bennett) knows no bounds. He has been enamored with her his entire adult life but has never been brave enough to declare his affections.

He has finally decided to make his intentions known after being counseled by his good friend --- and fellow soldier in the King’s Guard --- Le Bret (Bashir Salahuddin). Alas, Roxanne has just fallen in love --- at first sight --- with a new recruit to the Guard named Christian (Kelvin Harrison Jr.). She prevails upon Cyrano to keep Christian safe, which he does, while also encouraging Christian to write to Roxanne to express his love.

Unfortunately, Christian does not possess the same skills at writing as Cyrano. Willing to assist Christian in his endeavor to woo Roxanne, Cyrano can now put all his pent-up feelings for her into the love letters he pens from Christian. What could possibly go wrong?

Rostand’s sumptuous play about love and courage has long been a favorite. It’s been adapted several times, but always with Cyrano fretting that Roxanne won’t love him because of his nose. Schmidt, who wrote the screenplay based on her unique --- and very successful --- stage adaptation, which also starred Dinklage, is married to Peter. When Erica first began working on her project for the theatre, her husband was keenly interested in playing Cyrano.

After Wright saw their production, he knew he wanted to make a film version. Shot on location in Italy with a score and original songs written by The National’s Bryce and Aaron Dessner, with lyrics by Matt Berninger and Carin Besser, CYRANO is a gorgeous movie all around. The cinematography by twice Oscar-nominated Seamus McGarvey, the production designs by six-time Oscar- nominated Sarah Greenwood, set designs by Katie Spencer and costumes by Massimo Cantini Parrini help create the breathtaking world of CYRANO, set between 1640 and 1712.

And yet none of this would matter without the brilliant performance by Dinklage. The breadth of his talents is amazing --- who knew he could sing? And his swordplay is equally impressive. If you follow our reviews, you will know I have been a huge fan forever, but this role definitely sets him apart. This is not his “Game of Thrones” persona --- it’s much deeper.

Bennett and Harrison Jr. are lovely --- and well-cast, especially Bennett. Her old-world beauty suits the role of Roxanne. She plays the refined lover of all arts as a woman not to be trifled with. Wright and Schmidt have a take on Rostand’s play that is completely their own. CYRANO is a wonder and deserves to be seen and admired.

The character of Cyrano de Bergerac, created by French playwright Edmond Rostand in 1897, has been the focus of stage plays and films ever since. But never has the part of Cyrano been portrayed by a little person, or someone with a “unique physique”. That has changed with the casting of Peter Dinklage in a new film, CYRANO, directed by Joe Wright with a screenplay by Dinklage’s real-life wife Erica Schmidt.

Cyrano de Bergerac has always been a fearsome swordsman and an equally good wordsmith. But when it comes to his feelings of love for the beautiful Roxanne, in Rostand’s original, he cannot get past his insecurity about his oversized proboscis. Wright saw a live production of “Cyrano” in Connecticut starring Dinklage as Cyrano and Haley Bennett as Roxanne with staging by Schmidt, including musical numbers. No longer is Cyrano concerned about his nose, instead it’s his stature. Wright was hooked.

The result is the film version CYRANO with Dinklage and Bennett reprising their stage roles and Kelvin Harrison Jr. as Christian, the young man who falls in love with Roxanne at first sight, as she does with him. But Christian is no magician when it comes to words of love, so that task falls to Cyrano who writes letters to Roxanne for his good friend Christian. In the film Christian speaks aloud to Roxanne the poetic words of love that Cyrano is feeding him from behind a wall.

CYRANO is touching and fascinating. Anyone who has ever felt inadequate divulging his or her feelings for someone else because of a perceived physical or other shortcoming will identify with Cyrano’s plight. In the hands of these three fine actors the film becomes yet another version of Rostand’s classic story, but with the obvious twist.

Most of CYRANO was filmed in the exquisitely beautiful small Sicilian town of Noto in southern Italy. The 300-person cast and crew had to contend with record snowfalls and an eruption by the iconic volcano Mount Etna. Meanwhile, no details were spared in this lavish production. Even the quill pen used by Cyrano to compose his letters was scrutinized. Costume designer Massimo Cantini Parrini, just nominated for a 2022 Oscar, led his team with over 700 costumes made from scratch.

It's impossible not to like Dinklage in whatever role he assumes. We first saw Dinklage in THE STATION AGENT almost 20 years ago and have closely followed his career ever since. As Cyrano he has the power to break your heart as he struggles every day to deal with his feelings for lifelong friend Roxanne.

One heartwarming event that came from the filming of CYRANO was the adoption of a one-month-old puppy by Dinklage and Schmidt. They spotted the homeless little female under a bush and ultimately brought her back to the U.S. to join the other dogs they have adopted. Her name? Roxanne, of course.