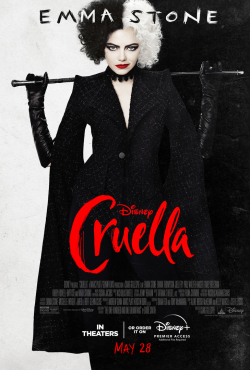 If director Craig Gillespie had paid half as much attention to amending the bizarre storyline by Aline Brosh McKenna, Kelly Marcel and Steve Zissis and the way overlong screenplay by Dana Fox and Tony McNamara as he did to costume designer Jenny Beavan’s contribution, CRUELLA wouldn’t be the disappointment that it is. To pen that I am desperately let down is a huge understatement.

And, seriously, what is up with Disney’s obsession with killing off mothers? And why make a movie about Cruella de Vil that is rated PG-13? I’m shocked it managed that rating --- especially after the disturbing demise of young Estella’s (Tipper Seifert-Cleveland) “mother”, Catherine de Vil (Emily Beecham).

Let me state --- emphatically --- that CRUELLA is not, let me repeat, NOT for young children. First and foremost, despite the two really cute dogs, Buddy (Bobby), a street dog found by Estella, and Wink, who belongs to Jasper and Horace --- and who steal the entire movie --- CRUELLA’s script is not in the least entertaining for children. Even the Baroness’ three dalmatians are vicious --- not at all like the cuddly pups we know and love. Much of the content is over the heads of children and certainly not appropriate. Trust me, they will be bored out of their minds.

I sound like a broken record, but it is all about the writing. This screenplay is too convoluted and preposterous. Young Estella is a brute. She already has a head full of hair --- half black and half white. Granted, this causes a lot of teasing, but she is more than capable of taking care of herself.

When she is finally booted from her posh private school, she and her mother head for London with one stop to make first. After a tragic “accident”, Estella is forced to continue on, hopping onto a truck which drops her in Regents Park. There she meets 12-year-old Jasper Badun (Ziggy Gardner) and his brother, Horace (Joseph MacDonald).

The two orphan brothers take in Estella and for the next 10 years they make a living picking pockets in 1970s London, eventually moving on to more daring robberies. But Estella (Emma Stone) has always wanted to be a fashion maven, so Jasper (Joel Fry) and Horace (Paul Walter Hauser) set her up with a job at Liberty of London --- as a cleaner --- not what she expected. Not deterred, Estella spends a night redoing one of the store windows in the punk rock fashion of the moment.

The outlandish display catches the attention of Baroness von Hellman (Emma Thompson) who owns the most prestigious fashion house in London, and herself a designer of haute couture. She immediately hires Estella who quickly becomes tired of designing for the Baroness and recognizes an opportunity to strike out on her own. Changing her name from Estella to Cruella, she makes a play to replace the Baroness at her own game with a fashion line much edgier and more hip.

If you think this sounds like children’s fare, good luck with that. CRUELLA’s biggest sin is that it just isn’t funny. I laughed once when the Baroness tells one of her underlings that he’s sweating --- and he smells. Childish, I know, but it reminded me of telling David he occasionally suffers from OMS (Old Man Smell). But we all smell at one time or another --- (note: this last message from Jeanne barely made it past the censor’s desk).

Fortunately, the cast is in top form. Stone and Thompson are fabulous whenever they are on screen, alone or together. Stone is quite appealing as the meek and mild Estella, but really comes into her own as Cruella. And no one plays a control freak maniac better than Thompson. She has that haughty look of superiority down pat.

I also did enjoy Fry, Mark Strong, who plays the Baroness’ valet, John, and especially Hauser. They are all amazingly good, if only the attempts at comedy were better written. The effort is there, just not the material. The same is true of Kirby Howell-Baptiste, as Anita Darling, Estella’s childhood friend who becomes the journalist who documents Cruella’s rise to fame. Her role is a clear waste of talent.

However, if you are only in it for the costumes and production designs, then CRUELLA may be the perfect film for you. Beavan’s costumes are divine --- spectacular --- outrageous --- and unforgettable. It’s almost a worthwhile experience for any fashionista. Then, add in the production designs by Fiona Crombie, which are phenomenal, and CRUELLA should be one of the movie wonders of 2021.

Alas, gorgeous costumes, sumptuous sets and even spot-on acting can’t make up for a story that makes little sense --- and is borderline violent. At one point, Cruella considers killing the Baroness? Really?

Haven’t we had enough of that lately?

And one scene --- which I found particularly egregious --- shows the Baroness tossing her empty lunch container out of her Rolls Royce limousine window. Are you kidding me? Do we seriously want to show children --- anyone --- that example? I don’t care how imperious the Baroness thinks she may be --- it sucked --- and it was totally unnecessary.

In an article written for “Reuters” by Hanna Rantala, she quotes Gillespie as saying “I just want you to be able to walk out and be like

‘wow, that was a lot of fun’.” Oops, missed that mark. And his film is too bloody long!

CRUELLA --- or as I like to call it “Battle of the Emmas” --- is a mean-spirited, overly-long, predictable and unfunny film based on the 1961 Dodie Smith novel “One Hundred and One Dalmatians”. Other than that, it does have some redeeming qualities.

The fashions, the fancy cars, the dogs and the music --- except for a mediocre rendition of The Beatles’ “Come Together” --- are highlights but not enough to salvage this effort. Emma Stone (Cruella de Vil/Estella) looks great in her costumes and black-and-white wig. Emma Thompson (Baroness von Hellman) sports an equal array of spectacular attire.

But as they each try to outdo the other in terms of physical mayhem and one-upmanship, one wonders how the movie earned only a PG-13 rating. Talk about giving bad ideas to copycats. In one scene the Baroness tests a stun gun on one of her bodyguards and a passing maid. And Cruella is constantly flailing her cane on others. The film is so focused on cruel acts that it merits an NC-17 rating, although that would preclude preteens from buying a ticket.

Director Craig Gillespie made a huge splash in Hollywood with his 2017 release I, TONYA which was written by a single scribe. But CRUELLA features five writers who have collaborated on this mishmash of a screenplay with jokes that fall flat and a boring storyline. One of the writers is Tony McNamara who penned one of Jeanne’s all-time bests, THE FAVOURITE (2018) --- which propelled Olivia Coleman to her Academy Award win and also featured Stone --- and created the well-received TV series “The Great”. Go figure.

A couple of visual effects are well done. In one scene Cruella’s attire is transformed from a white-hooded robe to a fabulous red dress, accomplished via flames engulfing her body. Another memorable scene has thousands of moths escaping from a dress stored in a

vault --- somewhat predictable in that a wooden crate was delivered to the Baroness with a “shipped from South America” stamp on it.

Cruella has two cronies played by Joel Fry and Paul Walter Hauser who deliver one-liners that go nowhere. And the always reliable Mark Strong plays the Baroness’ valet John, her right-hand man who reveals the film’s secret near the two-hour mark.

Overall, given the experienced cast and the reliable source material, CRUELLA is a major disappointment, even though our screening was held in Hollywood’s magical El Capitan Theatre. This is a venue where amazing introductions to movies are spectacles in themselves.