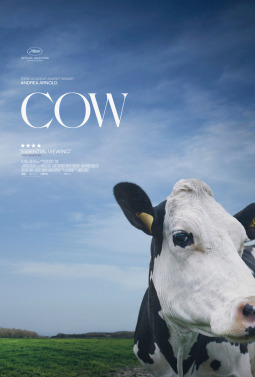 cows --- their serene faces with large soulful eyes are a thing of beauty in nature. And Luma is as pretty as they come.

Cows like Luma make milk and have calves. When COW begins, Luma is about to give birth --- again. Typically, they will deliver between 10 to 20 offspring during their lifetime, which seems extraordinary. And unfortunately for the mothers, their babies are taken away shortly after birth, so the milk they’re producing can be sold to humans.

But no matter how many times this happens, poor Luma cries for her calves --- her calls are filled with anguish and distress. It’s almost unbearable. We can only imagine what she’s going through.

Before Arnold began filming, The Cambridge Declaration of Consciousness was signed by an international group of highly regarded scientists. It states that there is an abundance of evidence showing that animals, like humans, are conscious and aware of feelings. It’s not difficult to believe, especially if you have a pet of your own.

But Luma’s journey isn’t all work, though at times it seems that way. At one point the herd is released into the fields and the cows practically run over one another trying to get free. It’s lovely to watch them enjoying the luscious grass and having the luxury to lie down and spread out. Quite the contrast to their life inside the barns.

Arnold’s Director of Photography, Magda Kowalczyk, does a glorious job filming Luma’s days and nights. From the births of her calves to her contemplative cud chewing against the midnight blue sky, as we watch Luma we can’t help but wonder what she must be thinking.

COW is one film I have no complaints about the writing because there is none. Except for the occasional words spoken between the farm workers, COW has no dialogue. It’s simply the marvelous essence of this hard-working animal.

The editing of this documentary is phenomenal thanks to Rebecca Lloyd, Jacob Schulsinger and Nicolas Chaudeurge. They have taken Kowalczyk’s superb camera work and created a seamless sense of Luma. At one point she knocks the camera with her nose to show her displeasure. At another time, Kowalczyk is right down in the grass as Luma is chomping away. COW is a stunning piece of filmmaking.

But in this world of disposables, that ugly trend is brought home with a vengeance in COW’s final moments. As we left the theater in shock, it’s hard to believe that a better solution couldn’t be found.

What is the allure of a 94-minute documentary with virtually no human dialogue about a cow raised in the English countryside? COW is frequently difficult to watch but strangely captivating. The doc is largely compelling because we wonder where it is heading, but by the conclusion we wonder no more.

The occasional mutterings of those working the farm are unintelligible other than one man pronouncing “she is pregnant”. ”She” is Luma, easily distinguishable from the many other cows in the film because of her almost totally white face, and also because director Andrea Arnold’s camera is focused on Luma in extreme close-ups.

A little background on the director goes a long way in understanding why this film was made. Arnold grew up on a wilderness estate in the U.K. and was always around animals, both domestic and wild. One day she espied some cows grazing in the fields and wondered if they could possibly feel any basic human attributes like pain, anger, fear or loss.

Her movie reveals that cows do indeed experience great loss, as an example, when their newborn calves are taken away from them after a precious bonding period. We witness Luma giving birth twice --- cows generally do so 10-20 times in their lifetime --- but she is separated from her babies so she can continue to provide milk for human consumption.

In Luma’s case, immediately after each delivery, she would lick her baby vociferously with obvious great affection in each swath of her tongue. Yet the calf would be swiftly removed to a separate barn, leaving Luma to bellow her cries of anguish --- seemingly expressing rage, frustration, disappointment and helplessness for all to hear. And her calves are given equal time in making known their own confusion. I couldn’t help but think of young children being forcibly taken away from their mothers. Jeanne’s sorrowful reaction to seeing this on film was palpable.

From a practical standpoint, cows like Luma are well fed but given infrequent freedom to graze. One extended close-up shows Luma munching on the dense thick grass complete with sounds of crunching. In fact, the use of sound in COW is made even more important because of the absence of dialogue. For example, we feel every clang of the gate or pen that keeps the cows inside their living areas.

As for Arnold, she is a highly honored multiple filmmaker at Cannes, and won an Academy Award in 2005 for Best Live Action Short Film (WASP). She even directed seven episodes of HBO’s popular series “Big Little Lies”. COW also features a soundtrack by none other than Billie Eilish among others.

But it is Arnold’s own quote that summarizes best her desire to make this documentary. “We are all connected”, she says, “to everything living”. COW is a unique film experience that lingers long after it is over.