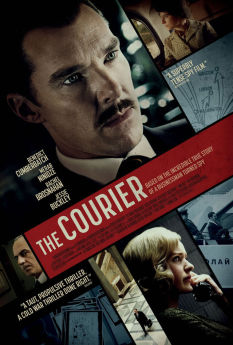 Following the end of World War II, a dark period in history known as the Cold War was raging between the Soviet Union and the United States and its allies. In this new spy thriller based on real events, THE COURIER, written by Tom O’Connor and directed by Dominic Cooke, Benedict Cumberbatch stars as Greville Wynne, an ordinary British businessman who unwittingly gets caught up in the efforts to defuse the Cuban Missile Crisis in 1962.

CIA Operative Emily Donovan (Rachel Brosnahan) is at MI-6 in London searching for an innocuous individual who can travel to Moscow under the radar of the Soviet government to make contact with a decorated officer, Oleg Penkovsky (Merab Ninidze). An MI-6 director, Dickie Franks (Angus Wright), suggests an acquaintance of his, Greville Wynne.

Wynne is a moderately successful salesman with a wife, Sheila (Jessie Buckley), and a young son, Andrew (Keir Hills). He’s not in terrific shape and he drinks too much --- a seemingly perfect choice for this assignment.

At first, Wynne balks at the prospect, but after Emily’s little speech about protecting hearth and country --- and her assurance that nothing untoward will happen --- he accepts the challenge. He is given a very specific tie clip to wear at his first sales meeting in Moscow --- a tip for Penkovsky, who will be present.

Wynne and Penkovsky immediately hit it off, bonding over their ability to hold their liquor. And he, too, has a family, a wife and a young daughter, whom he desperately wants out of Russia. His dream is to settle on a ranch in Montana, so he is eager to stop Nikita Khrushchev’s (Vladimir Chuprikov) madness leading up to the crisis in Cuba.

Of course, Wynne is forbidden to discuss any of this with Sheila, who immediately becomes suspicious after one trip turns into many, and Wynne’s persona undergoes a definite transition. She suspects him of having an affair, which he had been guilty of previously. He is unable to do anything but try to reassure her that this is not the case, as he travels back to Moscow one last time to help Penkovsky and his family escape.

O’Connor has penned a marvelous script. It starts out a bit

slow --- David was struggling to stay awake (no surprise there) --- but it does turn into the thriller as advertised. Not a great deal is known about either man, though Wynne did write two books about his dealings with Penkovsky later in life. However, much of what he wrote was refuted by MI-6 and the CIA because many of the reports from that period remain sealed.

It’s utterly fascinating nonetheless, and Cooke does an exemplary job getting the most out of his two leads, Cumberbatch and Ninidze. Cumberbatch is simply one of the best actors working --- everything he does is top-notch. O’Connor wrote the part with him in mind, hoping against hope that he would be interested in playing Wynne. It’s the perfect role for Cumberbatch and he jumped at the opportunity.

But what makes THE COURIER so intriguing, besides the superb writing --- and it’s all about the writing --- is the chemistry between Cumberbatch and Ninidze. They form a relationship which is totally believable, and we want so very much for them to be successful in their plot to get Penkovsky and his family out of the Soviet Union.

Each of these actors is so precise in their roles. Wynne, the novice, and Penkovsky, the overly cautious agent, manage to get over 5000 pages of crucial information out of Moscow and into the hands of the Americans, virtually staving off a nuclear war. But it is the quiet moments between these two men which determine their fate.

Walks down deserted Moscow streets so they can speak freely become the crux of their friendship. And Wynne’s introduction to  ballet --- at the Bolshoi in Moscow with Khrushchev present --- is another example of the things these two men enjoyed, and the constant scrutiny under which they worked. In fact, one of the most moving scenes has the two sharing another evening at the ballet for a performance of “Swan Lake”. The intensity of their emotions is overwhelming.

Espionage is a deadly serious business. Cooke and his cast and crew have done a masterful job of reminding us how very true this is. Capped off by a marvelous soundtrack by Abel Korzeniowski, THE COURIER is not to be missed.

The Cuban Missile Crisis during the administration of John F. Kennedy took place in October 1962. A new film entitled THE COURIER --- not to be confused with the 2019 film of the same name starring Gary Oldman --- details the relationship of two men who helped to defuse tensions that the rest of the world thought might very well lead to a nuclear war.

Nearly 60 years later an inside story caught the attention of screenwriter Tom O’Connor. The result is a tense, almost inconceivable saga about a British businessman and a Soviet whistleblower who were instrumental in preventing a nuclear showdown between the U.S. and the Soviet Union.

To play unassuming British salesman Greville Wynne, O’Connor always had Benedict Cumberbatch in mind but was cautious about having high hopes of landing him for the role. Ultimately, he did sign and Cumberbatch later said “Spies are interesting meat and drink for actors because there's always mask play and role play and the shifts are very sudden and quick.” In true Cumberbatch style, the actor is totally compelling as the beleaguered and perhaps somewhat naïve Wynne.

The next challenge was finding someone to play Soviet military intelligence officer Oleg Penkovsky. Russian actor Merab Ninidze, who watched archival footage of Penkovsky on YouTube, bowled over director Dominic Cooke and O’Connor on his audition, so that issue was resolved. And for THE COURIER to be credible, the two lead characters had to exhibit the strongest of friendships.

Cumberbatch and Ninidze excel in their respective turns, so when Wynne decides to return to Moscow to help Penkovsky escape --- against the strong advice of Britain’s MI-6 agent Dickie Franks (Angus Wright) --- it’s not a stretch for the audience to approve of his noble intent.

The fact that THE COURIER is not a work of fiction makes it that much more suspenseful. Rachel Brosnahan plays CIA agent Emily Donovan who, along with Franks, helps to convince Wynne that he can fulfill this assignment. Brosnahan summed up the film in terms of modern times when she likened Premier Nikita Khrushchev’s aggressive moves towards the U.S. to our former president’s “poking the North Korean bear”. She was quick to add understatedly that there is no comparison between Trump’s actions and the Cuban Missile Crisis.

Brosnahan is, or course, completely straight-faced as Emily and nothing like her “Mrs. Maisel” persona for which she won two Emmys. Her versatility manages to overcome any perception of being typecast.

Speaking of typecasting, Russian actor Vladimir Chuprikov is seen on a couple of occasions in THE COURIER as Khrushchev, a role he played on at least three previous occasions in TV series. Chuprikov is appropriately bombastic and somewhat scary as the burly Russian ruler. Anyone remember the real Khrushchev pounding his shoe on a podium? The actor died in September 2020 at age fifty-six.

The other main player in THE COURIER is Jessie Buckley as Wynne’s wife, Sheila. We learn that her marriage to Greville is on shaky ground, so it comes as no surprise when she utters the best line of the screenplay when questioned by CIA operatives about her husband’s Moscow activities. She says it’s impossible for Greville to be a spy because he “couldn’t even keep his affair a secret”.

I found the first half of THE COURIER a bit tedious as it necessarily built up the relationship between Wynne and Penkovsky. But when the latter is questioned by Soviet intelligence of Wynne’s potentially curious presence in Moscow on so many occasions, the suspense is ratcheted up considerably.

Then the film goes into high gear when British Airlines passengers --- including Wynne who is seated on the flight he believes will return him to London --- are told there is a delay in takeoff. Minutes later the KGB arrive to remove Wynne from the plane.

In his research, Cumberbatch had read in detail of how Wynne was treated by Soviet authorities. The actor lost considerable weight for this role over a three-month period. The result is a stark, gut-wrenching example of the cruelty and torture endured by Wynne as a political prisoner of war.

As viewers of THE COURIER, we maintain a belief in the closeness of Wynne and Penkovsky. And screenwriter O’Connor imbues Penkovsky with instant humanity when Ninidze’s character tells Wynne he and his family will eventually leave Russia and settle in Montana.