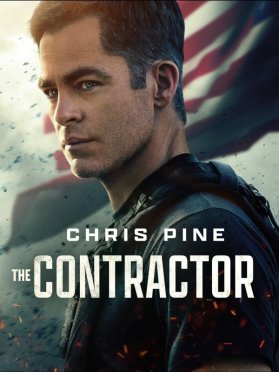 Everyone hankering for a top-notch reunion of Chris Pine and Ben Foster, a la HELL OR HIGH

WATER, 2016 (such an excellent film), will be sorely disappointed in Tarik Saleh’s first American feature THE CONTRACTOR. When a cast includes such notables as Pine, Foster, Kiefer Sutherland, Eddie Marsan and Gillian Jacobs --- to name a few --- and doesn’t deliver, the fault can only be in the writing.

Billed as an action thriller, THE CONTRACTOR unfortunately takes too long in its set-up to get to the action. Special Forces Sergeant James Harper (Pine) has been involuntarily discharged from the army and is left with no source of income. As their bills pile up, James and his wife Brianne (Jacobs) struggle to make sense of their predicament --- after all, James was a dedicated soldier --- and provide for their little boy.

When James’ former commanding officer, Mike Denton (Foster), invites him to his beautiful new home, James is curious how he can afford such luxury. Slowly reeling him in, Mike takes James to meet another former Green Beret, Rusty (Sutherland), who runs a private military operation out of his massive ranch. He immediately hires James and pays him $50,000 to cover his debts and ships him off to Germany on assignment.

The screenplay by J.P. Davis lacks vision and intensity, with not enough thrilling action. The first third of the film is way too slow. Most of the action takes place in the second third of THE CONTRACTOR, but by now the overall interest has waned considerably. The final third is somewhat compelling, but also overwhelmingly depressing.

Movies of this genre have been around forever. A good action thriller should hold your attention throughout. That just isn’t the case with THE CONTRACTOR. Though James has promised himself he will never work as a mercenary, it’s quickly apparent that’s the route he’ll be forced to take --- and it will not end well. It’s painfully obvious from the beginning and Davis’ script does nothing to subvert the inevitable.

Pine and Foster are great together. It’s a shame that their acting abilities are held in check. Eddie Marsan is the one truly bright spot in THE CONTRACTOR. His character, Virgil, takes James in and keeps him safe --- for a short while. It’s a small but important role, and as always, Marsan is perfect.

THE CONTRACTOR should have been a much better movie. As it is, it’s a mediocre effort --- and a waste of a lot of talent.

Chris Pine may yet separate himself from his STAR TREK/Captain Kirk roles, but as an American soldier who is involuntarily discharged after duty in Iraq and Afghanistan in THE CONTRACTOR, moviegoers may still only visualize him on the Starship Enterprise. Here he plays Sgt. James Harper, husband to wife Brianne (Gillian Jacobs) and devoted father to Jack (Sander Thomas).

A drug test reveals Harper’s use of pain killers for a bad knee incurred during his tours. He immediately gains our sympathy when the army unceremoniously informs him that he will not receive his military pension or healthcare. This raises the specter of an uncaring organization like the U.S. Army to mete out such severe punishment for an offense that seems easily forgivable considering Harper’s sacrifice.

But this does set the stage in writer J.P. Davis’ script for Harper to seek out questionable employment to help his debt-ridden situation. His friend and former commanding officer, Mike (Ben Foster), sets him up with Rusty Jennings (Kiefer Sutherland), a rather unsavory dude who offers Harper a job with a healthy down payment of $50,000. As unfair as it may be, it’s difficult to disassociate Sutherland from his Jack Bauer persona on the long-running TV series “24”. Plus, he basically phones in his villainous role here.

Meanwhile, Pine is as sympathetic a protagonist as anyone these days, but Davis’ script is not quite as thrilling as it might have been. Swedish director Tarik Saleh gets as much as he can out of the material he’s given, although some scenes in THE CONTRACTOR do generate true suspense. Harper finds himself frequently on the run from those who would do him harm, and these scenes are well orchestrated.

THE CONTRACTOR reunites Pine and Foster after their pairing in the highly regarded 2016 neo-Westerner HELL OR HIGH WATER. They mesh well again here but it’s not enough to recommend this film.