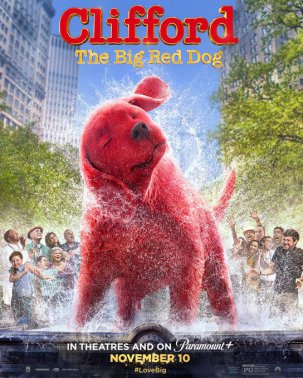 Please don’t jump to a conclusion about CLIFFORD THE BIG RED DOG before seeing it. It’s a delightfully charming --- sometimes overly silly --- adventure for children based on the book series by Norman Bridwell. And though David and I are usually big softies when it comes to movies like this, we enjoyed CLIFFORD THE BIG RED DOG more than we expected.

Darby Camp stars as Emily Elizabeth Howard, a lonely sixth grader at a posh private school in Manhattan. Her mother, Maggie (Sienna Guillory), is scheduled to go out of town on business and can only come up with her younger, ne’er-do-well brother, Casey (Jack Whitehall), to stay with Emily.

Obviously, nothing will go as planned, though Casey does manage to get Emily to school on time after they’ve stopped by a tent full of pets cared for by kindly Mr. Bridwell (John Cleese). Emily immediately falls in love with a bright red puppy, who somehow ends up in her backpack when she returns home from school. Mr. Bridwell had advised Emily that his growth will depend on how much he’s loved --- and you guessed it --- by morning the puppy she’s named Clifford is huge!

Kids --- and parents --- will get a kick out of all the shenanigans Clifford gets into, especially chasing a giant rolling ball in Central Park and rescuing a neighbor dangling from a four-story building. But CLIFFORD THE BIG RED DOG is more than that, it’s a lesson in acceptance, love and the importance of community.

When Clifford becomes an obsession for the ruthless CEO of Lifegro, Zack Tieran (Tony Hale), who falsely claims ownership of Clifford, Emily’s friend from school, Owen Yu (Izaac Wang), his father, Mr. Yu (Russell Wong), and all her neighbors band together to save her precious pup. Emily believes if they can find Mr. Bridwell, he’ll be able to make Clifford normal sized again.

Camp is totally endearing --- and more than capable of carrying the film alongside her large red fur baby. And Whitehall is just goofy enough without going overboard as the clueless uncle. They are so very sweet together and make a very believable niece and uncle.

It is Wang, however, who steals the film. He is so doggone adorable, with impeccable comedic timing. Hale makes a very good villain, and, as always, it’s wonderful to see John Cleese. He’s such a treasure --- perfect as Mr. Bridwell, named after the original author.

CLIFFORD THE BIG RED DOG is loads of fun --- the kids will love it!

In theaters and on Paramount+ November 10th

I’ve said it before --- you don’t have to be a dog lover to appreciate a film like this. CLIFFORD THE BIG RED DOG has a lot going for it that adults and kids can both enjoy. A worthy cast, excellent CGI and a beautifully compatible musical score combine for a movie that is poignant and laugh-out-loud funny.

When Emily Elizabeth Howard (Darby Camp) meets Mr. Bridwell (octogenarian John Cleese), he introduces her to the soon-to-be-named Clifford, a red puppy she can hold easily in her arms. Both their lives will soon be transformed forever. As Emily’s fondness for Clifford grows, so does he, and there’s no backtracking on that sentiment.

Emily is the new girl at a snooty private school in New York City, so Clifford comes along at precisely the right time in her life. The CGI crew consistently creates the perfect facial expressions for the red pup. And the best composer you probably haven’t heard of --- John Debney --- complements all of Clifford’s happy and sad countenances. Mr. Debney is an Oscar nominee with over 200 TV and film credits on his resume.

Camp is simply great as Emily. The 14-year-old is a performing vet, including two seasons on the Emmy-winning series “Big Little Lies”. She is accompanied in CLIFFORD THE BIG RED DOG by her character’s Uncle Casey, played by Jack Whitehall, whose performance stands out as both self-deprecating and hugely funny. Had Whitehall overplayed his part, smartly written by a host of scribes, this film could easily have disintegrated into common fluff. But Whitehall keeps it real, delivering all the quality lines he’s given with a fresh perspective that keeps us entertained. The diminutive Izaac Wang is delightful as Emily’s classmate, Owen, who befriends Emily when she most needs it. He also happens to be a techno wizard.

The villain in CLIFFORD THE BIG RED DOG is Zack Tieran, owner of Lifegro, a company that desperately wants to add Clifford to their research labs so they can duplicate his ability to grow to an enormous size. Tony Hale is perfect as the sleazy, greedy CEO who, of course, will get his comeuppance at the end. SNL cast members Kenan Thompson and Alex Moffat have amusing cameos, as does Rosie Perez in a brief stint.

If you’re thinking of dropping your child off at the theater to see CLIFFORD THE BIG RED DOG, consider going along. It will be a rewarding 97-minutes to your day.