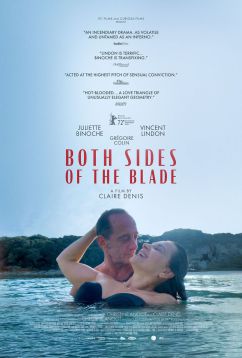 Whether one “likes” the characters in a film matters not. However, if one has no vested interest in the outcome of said characters --- and the film itself --- then obviously that does matter. Such is the case with director Claire Denis’ latest offering BOTH SIDES OF THE BLADE.

Written by Denis and Christine Angot, who have collaborated before, BOTH SIDES OF THE BLADE introduces Sara (Juliette Binoche) and Jean (Vincent Lindon) as a couple who have been living together for 10 years. They appear to be very much in love, though everyday life occurrences seem to get in the way.

Jean has a son, Marcus (Issa Perica), who lives with Jean’s mother, Nelly (Bulle Ogier). As so often is the case --- sigh --- father and son are estranged, and even though dad is currently unemployed, he can’t seem to make time for either his son --- or his mother, who, admittedly, would drive anyone crazy.

Before Jean, Sara lived with François (Grégoire Colin), Jean’s best friend. After all these years, and a stint in prison for Jean, François reaches out to Jean with a business opportunity.

Coincidentally, about the same time, Sara espies François on the street. Despite this supposed great love she has for Jean, she contacts François, but for what reason --- only Sara knows. Or does she? And truthfully --- who cares?

BOTH SIDES OF THE BLADE is definitely one of those movies with unlikeable people. No one, not even the pathetic son, is worth caring about. Binoche is a lovely, talented actor who has done some amazing work over the years. Most recently, she gave a marvelous turn in “The Staircase” as Sophie Broussard, based on the real-life story of convicted murderer Michael Peterson.

Perhaps it’s just her work with Denis which is objectionable. Binoche was the protagonist in Denis’ comedy/drama, LET THE SUNSHINE IN (2017), which can easily be forgotten. Despicable characters are usually fascinating, supplying intrigue, but in Denis’ hands, they simply come off as detestable.

Both Lindon and Colin are accomplished in their roles here. The fault with BOTH SIDES OF THE BLADE is not the cast, instead it lies with the screenplay. Sometimes too little information provided is a detriment. It makes it nearly impossible to care about what happens to someone if we don’t know what makes them tick.

BOTH SIDES OF THE BLADE is based on the novel “Fire” by Christine Angot and co-written by director Claire Denis with Angot. The film focuses on Sara (Juliette Binoche) and her relationships with Jean (Vincent Lindon), her current live-in lover, and François (Grégoire Colin) a previous amour of 10 years earlier.

A small movie like this must move me emotionally in some respect to recommend it. Unfortunately, I did not find any of the lead characters appealing or sympathetic. In general, Binoche is a fine actress (CHOCOLAT from 2000 opposite Johnny Depp is memorable), but here I don’t believe her character is sufficiently realized. Thus is she truly experiencing anguish being torn between two lovers, or does she just want her freedom?

It’s difficult to imagine she would sacrifice her long relationship with Jean --- they both profess deep love for each other --- for a possible renewal of her past with François. He, incidentally, comes across as a bit of a lout, so what was she thinking? At least Jean displays real anger at Sara for destroying what they have. Yet I felt no empathy for him --- or her --- or François.

Even more incredible is the fact that Jean and François were supposedly best friends and now potential business partners. Why would François give that up for a previous lover he hasn’t seen in 10 years? It just doesn’t add up for me.

Denis objected to her film being called FIRE, its original title, so it was changed to BOTH SIDES OF THE BLADE, a song written for the movie. It makes sense if you look at it from the perspective that love may be a double-edged sword. If this story is supposed to be a thriller, as has been suggested in some circles, it fails completely on that score.