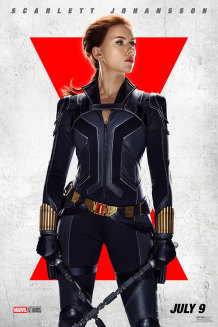 For the life of me, I simply don’t understand how someone could not like BLACK WIDOW. It’s fun, highly amusing --- I’m talking laugh out loud --- and wildly entertaining. Scarlett Johansson is utterly spectacular. She carries the film with aplomb, aided by an amazing supporting cast which includes Florence Pugh, David Harbour and Rachel Weisz.

This movie is long overdue for Johansson, who joined the MCU team in 2010. Her character Natasha Romanoff/Black Widow has endured a great deal over the years and is truly deserving of this opportunity for more of her back story to be told. And of course, it’s the perfect vehicle to introduce Pugh as her “sister”, Yelena Belova, another Black Widow.

BLACK WIDOW’s opening frames depict a tranquil suburban domestic setting, much like Youngstown, Ohio where I grew up. I almost whispered this to David, but we have a strict “no talking” policy in movie theaters. When “Ohio 1995” flashed on the screen, I actually laughed out loud --- and elbowed David. Of course, he didn’t get it until after the movie, but I digress.

Anyway, young Natasha (Ever Anderson) and young Yelena (Violet McGraw) are sitting down to dinner with their “mother”, Melina Vostokoff (Weisz), when their “father”, Alexei Shostakov (Harbour), bursts in and announces that they must leave their home IMMEDIATELY.

What ensues is a crazy car chase followed by an even crazier takeoff in a small plane with Melina piloting and Alexei hanging on the wing. Arriving in Cuba, the girls are separated and taken away for the purpose of training in the Red Room, a precursor to becoming a Black Widow.

Flash forward and Natasha (Johansson) is on the run, being pursued by those who want to see her destroyed. A buddy from her days as an agent for S.H.I.E.L.D., Rick Mason (O-T Fagbenle), and she have a hilarious argument over the correct pronunciation of Budapest. It’s in that beautiful city where she encounters the now-grown Yelena (Pugh), and after a raucous battle for the upper hand in their relationship, the girls realize they need Alexei, who’s currently sitting in a Russian maximum prison.

And one of the best scenes in BLACK WIDOW --- or any recent film for that matter --- is the prison break orchestrated by Natasha and Yelena. Director Cate Shortland and cinematographer Gabriel Beristain pull together one of the most exciting episodes, akin to the magnificent stunts which populate the MISSION IMPOSSIBLE series.

But it isn’t just the action that makes BLACK WIDOW so enjoyable. It’s not nearly as frenetic as some of the other Marvel movies, thankfully. There is so much humor it could almost be billed as a comedy.

Many of the big laughs come at the expense of Alexei, especially when he manages to squeeze into his old super-soldier getup. The arm-wrestling scene in the prison is another great moment for Harbour, who appears overweight and unkempt throughout BLACK WIDOW as part of Alexei’s persona. He’s such a great addition to this cast, his overall contribution cannot be denied.

However, it is Pugh who will garner most of the attention here. Don’t get me wrong --- Johansson is awesome, despite whatever you may be reading as reported in the media. This is her movie, and she makes it her own.

There is no denying that BLACK WIDOW is also the set-up for Yelena to take over where Natasha left off. Pugh is fierce and unrelenting portraying Yelena, but she is also quite capable of achieving major laughs. Her impersonation of Natasha posing in her Black Widow stance is hysterical. Though Natasha vehemently denies her propensity to do it --- we all know Yelena hit the nail on the head.

The best recommendation I can offer for BLACK WIDOW is the fact that David managed to stay awake the entire running time of 133 minutes! Normally these action-hero movies put him to sleep off and on, but he truly appreciated BLACK WIDOW --- and I didn’t have to nudge him awake once. As always, make sure you stay through the entire closing credits so you can see what comes next!

There are at least a couple of notable aspects to BLACK WIDOW, the first Marvel Cinematic Universe film to open in movie theaters since before the pandemic. For the first time a female is the lead superhero (Scarlett Johansson) and another female actor (Florence Pugh) has secured her position as a top-rung star. Rounding out the female superlatives is the exceptional job by Australian director Cate Shortland.

This film is a prequel with events sandwiched between CAPTAIN AMERICA: CIVIL WAR (2016) and AVENGERS: ENDGAME (2019). BLACK WIDOW is a very good distraction from the everyday woes people might have, at least for its rather brisk running time of two hours 13 minutes. I am far from an MCU nerd, so if I say BLACK WIDOW is entertaining you can bank on it.

The story is unusual given that its protagonist, Natasha Romanoff (Johansson), actually perished in AVENGERS: ENDGAME, a non-spoiler for fans who already know this. And as polished as Johansson is in the role --- this is her eighth appearance as Natasha --- it is Pugh who stands out as Yelena Belova, Natasha’s “sister”, albeit not her biological one.

Pugh gets many of the best lines from screenwriter Eric Pearson, with story assists from Jac Schaeffer and Ned Benson. As a result, she provides much of the comic relief, the most prevalent being her character’s mockery of Natasha’s stance when her older “sister” prepares for a fight.  Of course, Pugh herself is no slouch when it comes to fight sequences and assimilating the special effects. There is no doubt that she is the “heiress apparent” to the Black Widow title for future Marvel pictures.

The gripping opening sequence of BLACK WIDOW features young Natasha (Ever Anderson) and young Yelena (Violet McGraw) having dinner with their faux parents Melina Vostokoff (Rachel Weisz) and Alexei Shostakov (David Harbour) in 1995 Ohio. What follows sets up the rest of the film when the “sisters” reunite 20 years later.

Harbour also stands out as the Russian super-soldier who ends up in a maximum prison in his homeland. His arm-wrestling scene takes on a gruesome overtone when his opponents get progressively bigger and stronger. Alexei’s alter ego, Red Guardian, manages his own version of comic relief, amid his efforts to reunite with his “daughters” after many years. And Weisz has her own great moments handling her fantasy role of motherhood versus her real-life role as a Russian scientist.

As is the case with Marvel films, the stunts are impressive if not very believable. The individual battles are neither interminable --- one of my pet peeves --- nor over the top, at least for the world of Marvel. Having said that, the prison escape scene is so far fetched all you can do is enjoy your popcorn and soak it all in.

Veteran player-of-villains Ray Winstone seems less menacing than he should be as Dreykov, the Red Room mastermind where young nubile women are trained to be killers. Of course, he presents no problem for Natasha in their hand-to-hand combat. And be sure to stick around after the closing credits to get a sneak peek at what the future holds for the franchise.