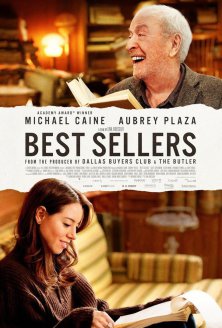 What does an old, crotchety reclusive author have in common with a female millennial publisher? That is the crux of Anthony Greico’s 2015 Nicholl Award-winning screenplay about Harris Shaw (Sir Michael Caine) and Lucy Stanbridge (Aubrey Plaza).

Lucy has inherited her father’s small publishing house, only now after some questionable decisions --- and bad reviews --- she is in peril of losing it. She and her dedicated assistant, Rachel Spence (Ellen Wong), have discovered that the author who put her father’s publishing establishment on the map, Harris Shaw, owes them a book. The problem is he hasn’t written anything since that first effort “Atomic Autumn” which he penned in the 1970s.

When Lucy and Rachel drive to meet him, he actually does have a manuscript --- one he loathes --- but he gives it to them anyway. What Lucy doesn’t register is that Shaw’s contract distinctly states that no one will edit his work. All true --- except if Lucy abides by that stipulation, then Shaw --- also part of the contract --- must take his book on the road.

So begins a booze-fueled book tour with Shaw refusing to read a single printed word --- only repeating his favorite single word “bullshite”, at every single reading. Of course, this is immediately picked up by everyone on social media. Unfortunately, none of this is translating into book sales, and Lucy has her ex, Jack Sinclair (Scott Speedman), waiting impatiently to scoop up her inheritance and make her publishing house his own.

Greico’s screenplay is decent, though it is rather formulaic, allowing the audience to guess almost every outcome. What saves BEST SELLERS is the casting of Caine --- and his on-screen chemistry with Plaza.

Even at 88, Sir Michael is as vibrant and entertaining as always. This is a perfect role for him as he plays the curmudgeon so incredibly well. And as his attitude towards Lucy softens, that is just as believable, too. As for Plaza, she holds her own with Caine, providing him with the necessary foil. The two of them are delightful together and had that not been the case, BEST SELLERS would have failed miserably.

Wong is a good addition to the cast, providing much of the comic relief. Director Lina Roessler shows a nice light touch with her film, never letting us forget that this is all about Shaw/Caine, Stanbridge/Plaza and a real best seller.

In theaters and On Demand