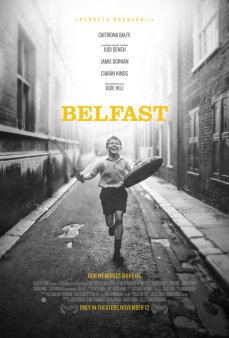 Based loosely on director Kenneth Branagh’s own childhood in Northern Ireland in 1969, BELFAST is a lovely, poignant film about family wrapped up in the violence of that era. How does a nine-year-old boy navigate the tumultuous effects of a world turned upside down?

Buddy (10-year-old Jude Hill in his acting debut) lives an idyllic life in his close-knit neighborhood in Belfast surrounded by his older brother, Will (Lewis McAskie), his Ma (Caitríona Balfe) and his Pa (Jamie Dornan). And not far away are his grandparents, Granny (Judi Dench) and Pop (Ciarán Hinds), where he spends many afternoons after school getting sage advice about math --- and girls.

It is August of 1969, the Americans have just landed a man on the moon, and all is right in Buddy’s world --- except for the fact that Pa must work in England to make enough money to support his family. But tension is brewing between the Catholics, who are in the minority, and the Protestants. Now their once loving community, where everyone watches out for everyone else, is being torn apart by riots, bombings and thugs.

The fact that this young boy, Jude Hill, carries BELFAST is simply astounding. He’s in almost every scene and his performance is totally engaging and amazing. He’s so natural as Buddy --- making his first film look effortless. When Dench calls him “sensational”, you know you’ve got a young actor to keep tabs on.

It isn’t just Hill, though. The entire cast is brilliant. Dench, of course, need no additional praise, but she is as perfect as ever. Granny adores this child and tempers Pa’s rather idealistic approach to Buddy’s problems with wisdom we could all use.

Balfe is the other standout in this small but mighty cast. She is phenomenal --- demonstrating great strength and courage as the only parent present for these two boys while her husband is away in England. It’s not easy handling two boys, especially Buddy who is being encouraged to join a “gang” by an older female friend, Moira (Lara McDonnell). She even ropes Buddy into stealing candy from the local pharmacist, prompting a visit from the constable --- a real moment out of Branagh’s childhood in Belfast.

As for Dornan, this is his best performance to date. His chemistry with Balfe is real --- and believable --- unlike his pairing with Dakota Johnson in the FIFTY SHADES trilogy. If it’s Ma and Pa against the world, we know these two will prevail. And lastly, Hinds is magical. Pop is the grandfather everyone would love to have --- kind, compassionate, with a wonderful sense of humor.

BELFAST, itself, incorporates a great deal of humor. Though Branagh doesn’t shy away from the violent eruptions and fear, he also doesn’t prolong the angst by letting it dominate the general tone of his movie. Instead, BELFAST is a hopeful story, full of love, family and honor.

You certainly don’t have to be of Irish descent to appreciate or enjoy BELFAST. The sentiments are universal, and we are all the better for another Branagh success.

How cool is it to watch Gary Cooper and Grace Kelly in clips from a classic film like HIGH NOON (1952) while seated in a theater in 2021 viewing a Kenneth Branagh movie set in 1969? The answer is very! Branagh wrote and directed BELFAST based on his own life as a young boy growing up in Belfast in Northern Ireland, and American movies were a large part of his upbringing.

The film is not autobiographical but Jude Hill, making his film debut as nine-year-old Buddy, is certainly modeled after Branagh in his childhood. Young Hill is so good in BELFAST he merits legitimate comparisons to Roman Griffin Davis who amazed audiences with his performance in 2019’s JOJO RABBIT.

Jude told an interviewer he wanted to be a software engineer until his “fun” experience working with Branagh on BELFAST, so now he is clearly focused on an acting career. After what must have been an exhilarating thrill beating out some 300 other Buddy wannabes, a star no less than Dame Judi Dench hopes to be around long enough to watch Jude’s career blossom in future roles.

Dench, a frequent collaborator with Branagh, plays Granny, married to Pop (Ciarán Hinds). They are parents to Buddy’s father, Pa (Jamie Dornan), who leaves Belfast regularly to work in England where the jobs pay better. These two veteran actors are wonderful in BELFAST. Branagh’s decision to cast them was easy, as Hinds grew up within a mile of Branagh’s neighborhood, while Dench’s mother is from Dublin.

Belfast in 1969 is experiencing a major upheaval as religious differences raise their ugly heads. What was once a carefree community made up of Protestants and Catholics erupts into full-scale chaos as a rowdy group of Protestants decides to create havoc with the local Catholics. We get only a brief glimpse of the rioting, at both ends of BELFAST, but sandwiched in between are the incredible choices and life-changing events that denizens of the town must consider.

Yet Buddy, whose family is Protestant, still manages to go to school and decide that a certain little girl will be his wife one day --- once he works up the courage to actually speak to her. Branagh infuses his film with a large degree of mirth and lightheartedness despite the threat of full-scale war that permeates the atmosphere.

Dornan’s character is a strong figurehead who stands up to the Protestant bullies with a threat to kill anyone who harms his family. Pa’s wife, Ma (Caitríona Balfe), desperately tries to keep things as normal as possible for Buddy and his older brother, Will (Lewis McAskie). Balfe’s powerful performance is generating Oscar buzz.

Filmed in a special type of black-and-white, BELFAST features the music of yet another native son of Belfast, Van Morrison. Eight of his songs dominate the score for Branagh’s film.

The movie is replete with life lessons, tolerance of people’s differences being foremost. In one memorable exchange, Buddy confides to his dad how he likes a girl in his class but she’s Catholic. Pa’s response is classic: (and I paraphrase) I don’t care if she’s a practicing Hindu or a vegan anti-Christ, as long as she’s a good person.

BELFAST is a film that warrants a repeat viewing, but I would recommend if you stream it, turn on the closed caption option. You wouldn’t want to miss any of Branagh’s thoughtful script.