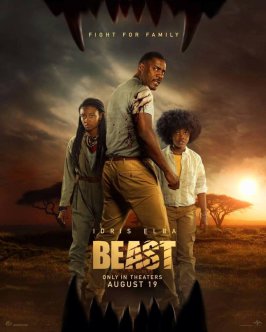 The filmmakers of this latest man vs. animal thriller have succeeded on an exceptionally high level to keep their viewers enthralled and slightly uncomfortable. BEAST manages to sustain real suspense for virtually its entire running time, even surpassing horror classics like JAWS, PSYCHO and THE SHINING. And that’s not hyperbole.

BEAST opens in the jungles of Africa where a team of poachers is hunting a pride of lions. Armed with assault rifles, the animals don’t stand a chance. But one manages to escape the carnage and this single lion will find a way to exact revenge on anything walking on two feet.

Dr. Nate Samuels (Idris Elba) and his two daughters, teens Meredith (Iyana Halley) and Norah (Leah Jeffries), fly to Africa to meet one of Nate’s best friends, Martin Battles (Sharlto Copley) who manages a game reserve. “Uncle” Martin, as the girls call him, lives in Africa and is astute in all things related to its four-legged denizens. He notes, at one point, “it’s the law of the jungle”. He even has a startling but precious hugging sequence with two adult lions he raised as cubs but released into the wilds some time earlier. We don’t know it at the time, but this scene is major foreshadowing.

We learn that Nate’s wife died of cancer after they were separated, but his older daughter, Meredith, still resents him for their failed marriage. The younger girl, Norah, is more understanding, and she is both adorable and smart as a whip. This somewhat cliched family dysfunction is not belabored, but it does set the stage for Nate to make amends via his heroics as they battle the killer lion.

BEAST is not for the faint of heart. All but a fraction of its 93-minute run time is fraught with jaw-dropping tension. Even the quieter moments are dripping with anticipation of something or someone challenging the safety of the quartet. A brief interlude with poachers suggests that man is potentially as dangerous as any creature.

Elba again proves his acting prowess with a strong performance as he is desperate to protect his girls. But he also recognizes his shortcomings. When their safari truck will not start, Meredith is dumbfounded that her father doesn’t know how to hotwire a vehicle, one of a few comic moments. It’s a very physically demanding role for Elba and he handles it beautifully.

Copley also renders an excellent turn as the group’s host and safari guide. They all feel safe and comfortable in his presence. And especially noteworthy are the portrayals by Ms. Halley and Ms. Jeffries. Neither overplays their role and they immediately garner our sympathies with their plight.

Director Baltasar Kormákur makes the most of the tight screenplay by Ryan Engle based on a premise by Jaime Primak Sullivan. Not a moment is wasted as Nate, Martin and the girls must overcome a dead vehicle, shoddy communications and a short supply of water.

A couple of past Oscar winners provide the pulsating music and superb cinematography. The score by Steven Price (GRAVITY, 2013) and the camera work by Philippe Rousselot (A RIVER RUNS THROUGH IT, 1992) naturally add to the suspense. There ought to be an Oscar category for Best Cinematography in a Cramped Space.

BEAST accomplishes the rare feat of royally scaring its audience without insulting the viewer’s intelligence. If you are a movie buff who appreciates the ability of a film to create real tension, BEAST is a must see. I promise you will not be bored.