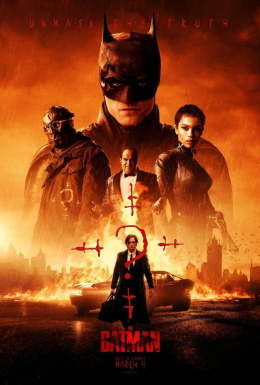 Director Matt Reeves’ take on classic film noir is THE BATMAN. One has to question whether or not another movie about Batman is even necessary --- and it’s not. But, as long as THE BATMAN is here, it does need to be seen.

Written by Reeves and Peter Craig, this version is as dark as ever --- both literally and figuratively. Rain falls on Gotham City throughout the entire film, while much of the action, per usual, takes place at night. Add to that the somber, some would characterize it morose, portrayal of Batman/Bruce Wayne by Robert Pattinson and THE BATMAN creates an overwhelming sense of dread.

Perhaps with all the horrifying things going on in the world right now, the timing for its release is unfortunate. THE BATMAN’s darkness is not unusual following Christopher Nolan’s trilogy, but Reeves puts his own spin on the corrupt underworld of Gotham City beginning with serial killer Edward Nashton’s, a.k.a. the Riddler (Paul Dano), ruthless --- and dare I say inventive --- murders of Gotham’s most powerful.

Pattinson’s Bruce Wayne isn’t the wealthy playboy we’ve seen before. He’s even more obsessed with finding out the truth surrounding the deaths of his father and mother. And here again, Reeves adds a twist, one which demoralizes the already brooding heir even more. Every time the Riddler strikes down a perceived enemy, he leaves behind a cryptic card for “The Batman”, thus catapulting the caped crusader into more of a detective than just a defender against evil.

THE BATMAN boasts an incredible cast. Zoë Kravitz stars as Selina Kyle, better known as Catwoman. It seems impossible that with the Batman mask hiding half of his face Selina could fall for him, but their chemistry is smoldering. Catwoman provides some of the much-needed levity and Kravitz is sensational in the role.

Jeffrey Wright plays James Gordon, a lieutenant in the Gotham City Police Department, and at times, Batman’s only ally. Wright plays Gordon with a subdued fervor, supporting Batman when he needs it most. John Turturro is especially unnerving as Carmine Falcone, a Gotham City mafia kingpin and Andy Serkis takes on the role of Alfred, Bruce Wayne’s trusted butler --- the one who knows all the family secrets.

The most surprising casting is Colin Farrell as Oz/Penguin, totally unrecognizable, but impressive as Falcone’s minion who runs the Iceberg Lounge. He’s so creepy he makes your skin crawl.

It is Patterson’s performance, however, which sets this Batman movie apart. His square jaw and perfect lips stand out under the bat mask --- a necessary requirement for the part.

It’s when he doffs the costume that Pattinson makes the role his own. The black around his eyes accentuates his black mood --- this is not a happy man. The burden of saving Gotham City is almost too much, and yet he refuses to give up. It will be interesting to see if he carries his bleakness moving forward in subsequent movies.

Filmed on location in the U.K. and Chicago, the cinematography by Greig Fraser is phenomenal. One of the best shots in THE BATMAN is the Chicago Board of Trade building filmed from the opposite end of LaSalle Street. It’s as breathtaking in the film as it is in person --- a personal favorite of mine.

And the majestic score by Michael Giacchino is as important and vibrant as any of the characters. At three hours, THE BATMAN flew by --- I can’t believe I’m not complaining about the length --- and David managed to stay awake. Warner Bros. will have a huge hit at the box office.

I never dreamed that a nearly three-hour film about Batman starring Robert Pattinson in the title role would be entertaining --- but THE BATMAN is just that, as well as being seamless and compelling. The action is sustained for the entire film except for the occasional quieter moments, such as one with Bruce Wayne and his trusted butler and closest friend Alfred (Andy Serkis).

First and foremost is the performance of Pattinson. If his Batman was unworthy --- as some have been in the past --- this film and all its special effects and musical accompaniment would have been wasted. But with Pattinson’s chiseled good looks and massive dark hair, Bruce Wayne/Batman embodies an undeniable screen presence. Pattinson is not called upon to be a special caliber of actor, but he is more than adequate.

THE BATMAN is a complex story involving Bruce Wayne’s family history, especially his father Thomas, and the latter’s relationship to hoodlums. In this film we get thugs galore, including the always dependable John Turturro as Carmine Falcone, Paul Dano in an astonishing turn as the Riddler, and a completely disguised Colin Farrell as Oz/Penguin. Other notables are Peter Sarsgaard as Gotham City D.A. Gil Colson who has a few secrets, and Jeffrey Wright as Lt. James Gordon, Batman’s close friend and only ally on the police force.

Zoë Kravitz plays Selina Kyle/Catwoman. Selina becomes a fierce fighter alongside Batman. She proves she can handle herself against any opponent. And she looks great in a red wig.

Speaking of fierce, Batman is a devastating pugilist, taking on any criminal element that deserves it, even if he is greatly outnumbered. Early on he punishes a group of subway hoodlums scarily made up for Halloween who threaten an innocent Asian man on the train platform. Batman calls himself Vengeance but by the end of the film he has rid himself of that nickname in favor of something more meaningful and beneficial to the people of Gotham.

Dano can be terrifying as a villain. He practically outdoes himself here as the nefarious Riddler, a sicko who devises unusually sadistic ways to kill those he perceives as liars. And when he unleashes a particularly abhorrent event on the citizens of Gotham, it provides the massive visual and special effects crews an opportunity to present some amazing images. Oscar winning composer (UP) Michael Giacchino’s score is equal to the task of complementing all the action sequences. Although it’s early, he may yet see another Academy Award nomination for his work on THE BATMAN.

Director Matt Reeves (PLANET OF THE APES series) co-wrote the screenplay with Peter Craig (THE TOWN) and this duo knows how to maintain an audience’s attention. THE BATMAN is violent and dark and frequently disturbing, but isn’t that what fans of this genre are seeking? I went into our screening expecting a bloated, too-heavy-on-the-action, overly violent, 175-minute ho-hum affair. THE BATMAN is none of these.